Please ensure Javascript is enabled for purposes of website accessibility
Log In Help Join The Motley Fool
Free Article Join Over 1 Million Premium Members And Get More In-Depth Stock Guidance and Research
By Rich Smith – May 4, 2020 at 7:32AM

Market crashes give you your best chance to buy blue chip stocks on the cheap.

Coronavirus has done a real number on the stock market.

From its highs of late February to its lows of late March -- and even counting all the gains it's clawed back since then -- the Dow Jones Industrial Average of companies is still down 16% today, and the Nasdaq is down 7%.

Investors are still searching the rubble in hopes of snatching up bargains, and make no mistake: There are bargains to be had. If you're searching for bargain basement "penny stocks" (despite the name, these usually refer to small-cap stocks priced under $5), well, there are literally hundreds of stocks that now cost less than half what they did when the year began, and that can now be bought for low-single-digit prices.

You could buy any one of them in hopes of making a double... but before you do that, I want to ask you just one question: 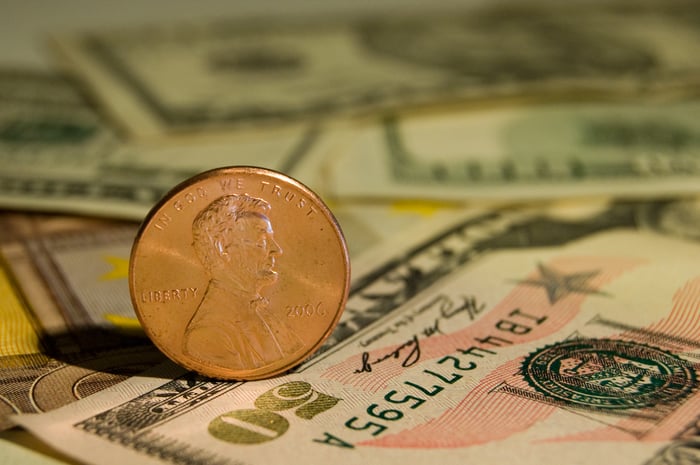 Quality is the best bargain of all

To be precise: Why would you even consider buying penny stocks when so many more significant businesses are still on sale?

Call me an elitist if you will, but when stocks go on sale, I think it makes more sense to buy good companies at historically cheap prices, than to go bottom-of-barrel-scraping in search of weaker "penny stocks" trading for slightly cheaper prices.

Allow me to illustrate with a few compare-and-contrasts.

Due to coronavirus and the recession it has spawned, it's now possible to buy shares of Air Industries Group, an unprofitable New York maker of airplane parts for the Boeing 777 and other planes, for just $1.16 a share. You could do that, but I personally think it makes more sense to just buy Boeing (BA 1.50%) itself.

True, Boeing has gotten itself in a bit of a tough spot. What with travel bans and stay-at-home orders drying up demand for air travel, there's not a lot of demand among airlines for buying Boeing's airplanes right now. The company is also still dealing with the fallout of its massively ill-considered changes to the 737's flight software, which have resulted in two plane crashes, and a flight suspension on the 737 MAX that remains in effect to this day.

I don't. True, Boeing may not be profitable today, and its near-term prospects look dim at best. But at a share price now less than half what it cost at the start of the year, Boeing stock now costs what it did in 2016. Come the day this economy gets back to "normal," and Boeing gets back to earning $14 or $18 a share annually, that's going to look like a bargain.

Automotive wheel-maker Superior Industries sports a $37 million market cap, a buck-fifty share price -- and no profits whatsoever. Instead of buying it, how about taking Ford Motor (F 0.58%) for a spin?

After 117 years in business, Ford is even older than Boeing. And up until this week at least, it was profitable. In this week's report, Ford confirmed that sales took a big hit from COVID-19 in the first quarter, and yet, the company held onto its 6% global market share and its position among the world's biggest automakers.

So yes, coronavirus hit Ford like a truck, causing the company to report a $2 billion net loss on Tuesday. But already, the company is making plans to get back on track, and restart production in Europe at least. Ford's cutting costs, hoarding cash, and taking "decisive actions" to ensure that when this pandemic has run its course, Ford will still be around to sell the cars and trucks its customers love.

At a share price 43% below where it started this year, Ford is a blue chip stock trading for the cost of a blue light special.

For a price of less than $4 a share, you could be the proud owner of Republic First Bancorp, a small lender based in Cosa Mesa, California. Or you could pay over 10x more than that and become a shareholder in Citigroup (C -0.02%).

Republic First may look like the cheaper stock, but I consider Citi the better bargain. Why?

Well, obviously, because Citigroup is selling at a big discount today -- down 37% since the start of the year -- but also because Citigroup is simply a better banking operation. With a return on equity (ROE) of 8.9% and a return on assets (ROA) of 0.8%, it's more than twice as profitable as penny stock Republic First (ROE: 3.9%, ROA: 0.4%). Last year, before coronavirus entered our vocabulary, Citigroup pulled down net profit of more than $19.4 billion. And even in the face of COVID-19, this international megabank managed to earn a cool $2.5 billion.

Annualize that out, and Citigroup could still theoretically earn $10 billion this year, which, at its current market cap, would give Citigroup stock a price-to-earnings ratio of less than 10.5 -- a lower valuation than Citigroup stock has averaged over the last 10 years.

Call me crazy, but that seems like a better bargain than just about any "penny" stock you can name.

Why Shares of American Airlines Are Flying Higher Tuesday