When Citigroup (NYSE:C) reported earnings on Wednesday, it announced a major milestone that its investors should cheer. The New York-based bank said that the fourth quarter of 2016 was the last time it'd separate the results from its Citi Holdings subsidiary, which was created in the wake of the financial crisis to house the bank's toxic and noncore assets.

More than any other major bank, Citigroup found itself in the crosshairs during the crisis eight years ago. Its decision to double down on subprime mortgages on the eve of the downturn led to a $17 billion loss in the fourth quarter of 2008 alone. It followed that up with a nearly $8 billion quarterly loss a year later.

To survive, Citigroup received tens of billions of dollars' worth of capital from the federal government, which it later had to repay by issuing new common stock and thereby diluting longtime shareholders. The net result was that, even today, its shares are down more than 90% from their pre-crisis high. 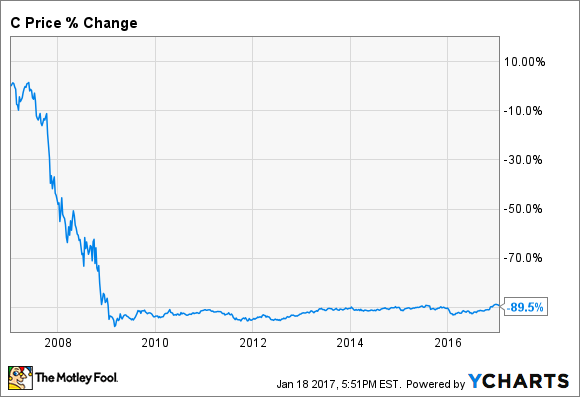 One of Citigroup's strategies to stem the flow of losses was to quarantine the responsible assets and operations in a separate subsidiary, Citi Holdings, which it created in the second quarter of 2009. "Citicorp is our core franchise and will be the source of Citi's long term profitability and growth," explained former-CEO Vikram Pandit at the time. "We will manage our businesses and assets in Citi Holdings to optimize their value over time."

At its peak, Citi Holdings administered more than $800 billion worth of assets. Considered on its own, that would make Citi Holdings the fifth largest bank in the country both now and when it was created.

Fast-forward to today, and Citigroup has whittled down the assets in Citi Holdings to $54 billion, which equates to only 3% of Citigroup's balance sheet. Just as importantly, as Citigroup's current CEO Michael Corbat observed in prepared remarks released Wednesday, the unit has been profitable for 10 quarters in a row.

But while Bank of America was late to the punch in carving out its own bad bank, it was the first to close it down, announcing its decision to do so in the middle of last year.

The moves by Citigroup and Bank of America to relegate their bad banks to the dustbin of history won't miraculously transform either one of them, as the shuttered operations will just be absorbed by other units in their holding companies. But this shouldn't mask the symbolic significance of the banks' decisions to do so.

Now, for the first time in eight years, when investors browse Citigroup's financial statements, it'll almost be as if the crisis never occurred.