Apple's supply chain has been rankled by reports of disappointing demand for the new generation iPhones. Rosenblatt Securities, for instance, estimates that the iPhone 8's pre-orders have fallen behind the previous two generations thanks to weakness in Cupertino's top two markets of the U.S. and China.

Not surprisingly, shares of Apple suppliers that were supposed to enjoy windfall gains with the launch of the new devices are now retreating. The following chart makes it evident that the rumors surrounding the poor sales of the iPhone are having a depressive effect on Skyworks Solutions (NASDAQ:SWKS), Broadcom (NASDAQ:AVGO), and Cypress Semiconductor (NASDAQ:CY). 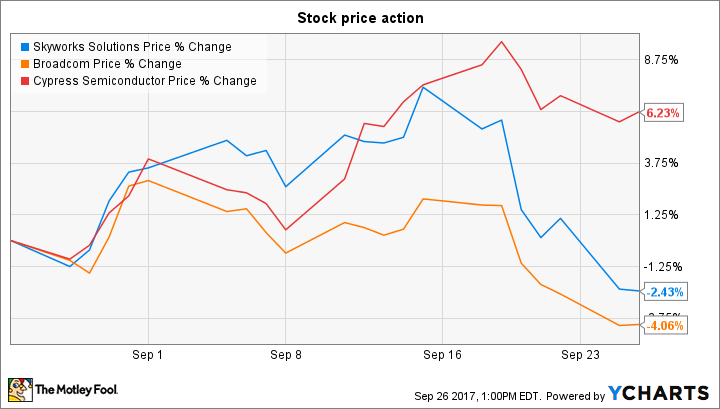 Investors, however, shouldn't start panicking as there's more to these three Apple plays than just the new iPhone. Of course, they might be in a spot of bother in the short run given their reliance on Apple, but in some respects, a decline in the stock price could be construed as a long-term opportunity. Let's see why. Skyworks is moving beyond smartphones

Skyworks is closely tied to Apple's fortunes as it gets 40% of its revenue from the iPhone maker, but the chipmaker is trying to bring more balance to its customer demographics. For instance, the radio-frequency (RF) chip specialist has started tapping the virtual assistant and smart home market.

The company has recently started supplying ZigBee and Wi-Fi chips that can be used in virtual assistants powered by Amazon. Additionally, Skyworks has launched motion detectors and security sensors to power systems from leading home automation players such as Bosch and Honeywell.

Skyworks is expanding into the Internet of Things (IoT) space by attacking the smart home opportunity. This is a lucrative move considering the space is estimated to grow at more than  14% a year until 2025, spawning the need for more chips to enable efficient communication between different smart home devices.

Skyworks Solutions' latest product development moves clearly indicate that the company wants to carve a bigger share of the IoT market for itself. In September, it launched a new connectivity platform that can be deployed by module manufacturers to enable high-speed machine-to-machine (M2M) connectivity.

In fact, Skyworks has already scored an impressive design win for this platform in the form of Sierra Wireless (NASDAQ:SWIR), the leading supplier of M2M modules with a market share of over 30%. As it turns out, Sierra has decided to source 17 Skyworks chips. As the M2M market is expected to clock an annual growth rate of 25% until 2020, this good be a future boon for Skyworks.

Therefore, savvy investors should focus on the long-term opportunity in Skyworks instead of sweating about the potential short-term implications related to the new iPhone.

Cypress has a lot going for it

The new iPhone comes equipped with fast-charging, and it is likely that Cypress has the chip to enable this technology. This contract should definitely add to Cypress' growth over the next year as this is a new design win for the company, as it was earlier restricted to supplying chips for the AirPods.

Therefore, the new iPhone is an entirely new opportunity for Cypress that should translate into revenue gains for the company. But at the same time, Cypress investors shouldn't ignore the huge opportunity that it enjoys in the USB-C arena that's growing rapidly thanks to benefits such as fast data transfer, a smaller footprint, and rapid charging.

Cypress claims that it commands 35% of the USB-C market as it has added design wins across both smartphone OEMs (original equipment manufacturers) and laptop makers. As it stands, there will be 75 personal computer models deploying  Cypress' USB-C technology by the end of 2017, setting the company on its way to tap a market that is anticipated to grow at 89% annually over the next four years.

Additionally, Cypress has also started taking advantage of the fast-growing automotive chip market as well by striking agreements with Tier 1 component suppliers. In fact, the company's automotive microcontrollers are being used in mass-market cars such as the Toyota Camry. Now, the use of semiconductors in the automotive space is estimated to increase at 10% a year over the next four years.

This should open up bigger opportunities for the chipmaker along with the potential gains from Apple.

Broadcom's content gains and storage growth will be catalysts

Broadcom is supposed to be the biggest winner with Apple's new iPhone generation as it is powering the new wireless charging feature, as well as landing more RF content. The chipmaker is reportedly supplying eight chips for the iPhone 8 as compared to five for the previous generation.

The company's higher content inside the latest iPhone should help it mitigate any potential volume-related losses if the new devices don't sell as well as expected. However, the launch of the premium iPhone X should improve matters as customers are possibly holding out for the more expensive device.

But the near-term uncertainty shouldn't discourage an investor with a long-term horizon from betting on Broadcom as it is witnessing broad-based strength across its business. The company's wired, industrial, and enterprise storage segments -- accounting for just over 70% of the total revenue -- are in fine form.

They collectively delivered  14% year over year growth in the latest quarter, with enterprise storage being the star of the show. In fact, Broadcom's enterprise storage revenue growth of 39% year over year outpaced the 27% growth in the wireless business. This business should get even better in the long run as the chipmaker has developed a strong suite of storage controller products to enhance storage capacity and the density of solid-state drives (SSDs) and hard-disk drives (HDDs).

This should help Broadcom tap the trend of higher capacity storage devices that are coming into vogue because of applications in the cloud, paving the way for long-term growth beyond Apple.