The COVID-19 pandemic has spurred a massive recession that's left the public reeling. Some economists were hopeful earlier in the year that the recovery would be relatively quick. But at this point, that's pretty unlikely to happen. In fact, there's a good chance our current recession will continue all the way into 2021. Here's why.

Last week, the public received some mildly encouraging news on the unemployment front: The jobless rate fell to 10.2% in July, the lowest it's been since the pandemic began. But double-digit unemployment is still problematic, and it's nowhere close to where the jobless rate sat earlier in the year.

In February 2020, the unemployment rate was just 3.5%. In March, it reached 4.4% -- already a jump, but a drop in the bucket compared to April, when unemployment peaked at 14.7%. Given that so many people are still out of work, it's unlikely that enough jobs will be recovered in the course of the next five months to bring unemployment anywhere close to pre-pandemic levels. 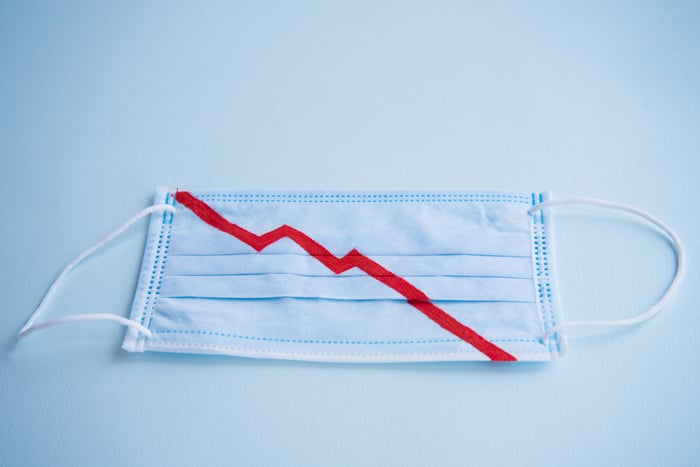 2. The pandemic still isn't under control

Health experts have made it clear that it's unlikely that we'll have a widely available coronavirus vaccine in 2020; early 2021 is looking like the best-case scenario right now. And that means it's on the public to act responsibly in the hopes of curbing the outbreak so the economy can reopen in a more meaningful manner.

But the COVID-19 situation has not gotten better in recent weeks; it's gotten worse. House parties, packed bars, and a widespread refusal to wear masks have caused cases to surge in much of the country. In the absence of a national lockdown, cases may very well continue to spike during the latter part of the year. This is especially likely as schools reopen and children are packed into poorly ventilated spaces. The longer the crisis rages on, the longer it will take for the economy to get back to its former state.

In March, the CARES Act was signed into law to provide COVID-19 relief, and one of its provisions was a $600 weekly boost to unemployment benefits. That increase helped millions of Americans cover their expenses from April through July, and it served the equally important purpose of pumping money back into the economy.

But unfortunately, the CARES Act only allowed for that extra $600 a week through the end of July, and lawmakers were unable to come to terms on a relief package in time to extend it. As such, jobless workers have already gone weeks without a boost to their unemployment income, which means many have no doubt dug themselves into financial holes. The longer laid-off workers go without an unemployment boost, the more the economy stands to suffer.

While President Trump did recently sign an executive order calling for an unemployment boost, its implementation will be tricky, there are many caveats, and it's unclear as to when that extra money will start hitting jobless Americans' bank accounts.

Gear up for a rocky five months

Many people are ready to kiss 2020 goodbye. Unfortunately, there's a good chance the recession won't get better anytime this year, so do your best to conserve cash, maintain a balanced investment portfolio, and retain your mental health during what can only be described as an extremely turbulent time.