Please ensure Javascript is enabled for purposes of website accessibility
Log In Help Join The Motley Fool
Free Article Join Over 1 Million Premium Members And Get More In-Depth Stock Guidance and Research
By Anders Bylund – Aug 21, 2020 at 9:13AM

The chip designer is growing a serious software business.

If you look a little closer at NVIDIA's report and earnings call, you'll find evidence of an even more significant change to the company's business model. Yes, semiconductor designs are still at the core of NVIDIA's day-to-day operations, but the company is also growing its software sales. That road points to wider profit margins and more reliable revenue streams in the long run because most of NVIDIA's software sales are tied to long-term subscription packages.

The company is not yet ready to break out software sales and operating profits into separate line items in its quarterly reports. Instead, we have to look for clues like management comments in order to see the business category gaining momentum.

The AI and data center networking efforts are really two sides of the same ambitious enterprise computing coin. NVIDIA's management is putting together a top-to-bottom data center framework that should generate strong growth for years to come. It's all based on software-defined virtual computing services, which, in turn, depend on NVIDIA's processors. Building the best processors or the fastest computer systems isn't the name of the game anymore. It's more about managing an entire data center like a single unit that can be split up and directed to various services with the help of systems management software.

"Going forward, you optimize at the data center scale," said NVIDIA CEO Jensen Huang. "And the reason why I know this for a fact is because if you're a software engineer, you would be sitting at home right now and you would write a piece of software that runs on the entire data center in the cloud. You have no idea what's underneath it, nor do you care." 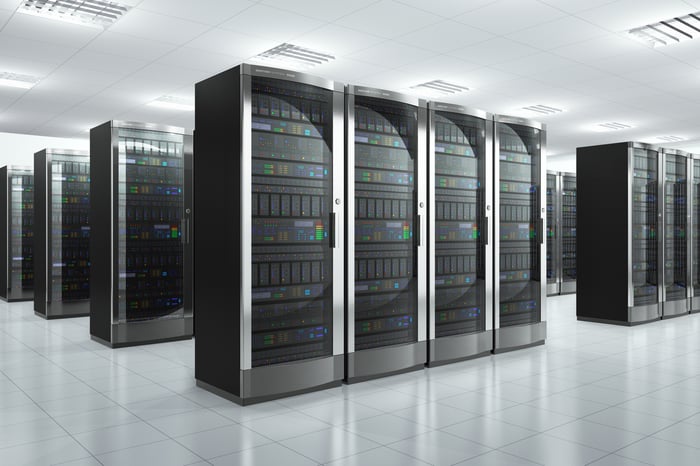 The architecture starts with great microchips, but Huang sees software taking the whole system to another level.

"Now we take this thing all the way through systems, the system software, algorithms, networking, all the way up to the entire data center. And the difference is absolutely shocking," he said. "You know, we built our data center, Selene, and it took us four weeks ... It is the seventh-fastest supercomputer in the world, one of the fastest AI supercomputers in the world."

And the software focus isn't exactly a new idea for NVIDIA. The market success you see today started with development efforts and design decisions many years ago.

"NVIDIA is a software-defined company today," Huang said, "with rich software content like GeForce NOW, NVIDIA virtual workstation in the cloud, NVIDIA AI, and NVIDIA Drive that will add recurring software revenue to our business model."

It should be pretty clear from this report that NVIDIA is leaning into subscription-based software sales in a big way. The company is following the lead of pretty much every enterprise software giant on the market, all of whom have been trading in their old single-sale software licenses for repeatable subscription sales in recent years. Many things can be sold as a service these days, including NVIDIA's data center networking tools and artificial intelligence platforms.