This partnership could be NVIDIA's big opportunity in the self-driving car market.

NVIDIA (NVDA 2.02%) and the Mercedes-Benz division of Daimler AG (MBGY.Y 2.78%) (MBGA.F 2.58%) are teaming up to truly build a computer on wheels. The two companies recently announced a collaboration to build a new computing system for cars, powered by NVIDIA's DRIVE AGX Orin technology. This new high-performance car computer will be used in new vehicles from Mercedes-Benz starting in 2024. NVIDIA's technology will allow these cars to drive regular routes autonomously and will include advanced safety and convenience features. But that's only half of it.

The software in these new cars will be completely upgradeable, just like a mobile phone. In a press release, Mercedes-Benz stated, "Customers will be able to purchase and add capabilities, software applications and subscription services through over-the-air software updates during the life of the car."

Turning the car into a software service could open the door to a whole new avenue of growth for NVIDIA's automotive business. Here's a look at the size of NVIDIA's automotive segment, and what this deal could mean for growth. Potential investors need to know that this deal will take some time to come to fruition, but that it could pay off handsomely because of how it's structured. 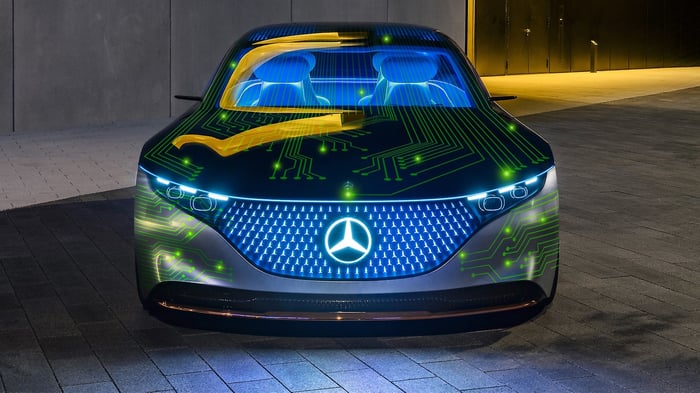 1. Don't expect big revenue from this deal just yet

NVIDIA's automotive segment made up 5% of total revenue in the fiscal first quarter. It fell slightly from $166 million in the year-ago quarter to $155 million in the most recent quarter. NVIDIA has made numerous partnership announcements in recent years with top carmakers and other developers of self-driving cars. The early-stage work being done on self-driving cars has led to a gradual increase in NVIDIA's automotive business, as this table shows.

The company has more than 370 partners using NVIDIA DRIVE to develop the computing systems needed to put a self-driving car on the road. NVIDIA and Mercedes-Benz have been working together for several years. In 2017, the two companies announced a partnership to bring an AI-powered car to market. NVIDIA spent four years working on an all-electric SUV with a computerized dashboard using an AI infotainment system. The Mercedes-Benz EQC cockpit was unveiled in 2018.

The latest deal with Mercedes could be the biggest yet for NVIDIA in the self-driving car space, but given that these new cars won't launch until 2024, NVIDIA is not likely to see a significant financial benefit in the near term. However, several Wall Street analysts have weighed in with estimates about what kind of opportunity this presents NVIDIA in the long run.

2. Making software for cars could be very profitable

The partnership with Mercedes-Benz is a taste of what might be coming in the consumer car market. NVIDIA says the market for AI hardware, software, and in-car services is $5 billion currently. If this technology is rolled out to a fleet of 100 million cars, the market opportunity approaches $700 billion.

So, where does that leave NVIDIA? The most lucrative part of this partnership is the potential to generate recurring revenue from selling software upgrades, either through one-time purchases of applications by the vehicle owner or a subscription service.

Financial terms of the deal were not disclosed by either company, but one analyst with Needham believes the ability for the vehicle owner to purchase over-the-air software add-ons could be financially beneficial for NVIDIA. Since NVIDIA is providing the software platform, there will likely be some kind of revenue-sharing agreement between NVIDIA and Mercedes-Benz.

An analyst with Credit Suisse believes NVIDIA's revenue from this agreement could reach $1 billion to $2 billion annually, which could translate to $0.80 to $1.60 in EPS. NVIDIA's adjusted EPS was $5.79 in fiscal 2020, so this one deal with Mercedes-Benz could be marginally accretive to the bottom line over time.

Keep in mind, these estimates are just for Mercedes. If NVIDIA reaches agreements with other car manufacturers, this could easily become a multibillion-dollar opportunity for the graphics specialist. This Mercedes deal is just another sign that this growth stock has still got a lot in the tank.

Why Nvidia Can Continue to Grow in This Important Market
411%