African swine fever in Europe could be profitable for multiple American producers.

Safe thus far from the inroads of African swine fever virus (ASFV or ASF) behind the vast moats of the Atlantic and Pacific Oceans, Tyson Foods (TSN -1.62%), Pilgrim's Pride (PPC -2.25%), and other U.S. meatpackers appear to be positioned for potential profits as China bans importation of German pork following the first case of ASF in Germany. Beyond Meat, Inc. (BYND -4.75%) could also see gains from sharply reduced European meat imports to Asia. How much the meat and plant-based meat sectors benefit from the bans also depends on other factors, such as their ability to meet demand, however.

The discovery last week of a single wild boar dead of African swine fever, or pig Ebola, near Germany's border with Poland triggered an immediate disruption of the international pork supply. Germany is the biggest European producer of export pork, with an approximate total commercial herd of 26 million swine.

South Korea banned importation of German pork products immediately, while the Philippines followed suit on Sept. 12. GMA News reported that the Philippine Department of Agriculture issued a statement saying "all shipments of pigs, pork and pork products from Germany into the Philippines will be confiscated by all DA-Bureau of Animal Industry (BAI) veterinary quarantine officers at all major ports of entry." 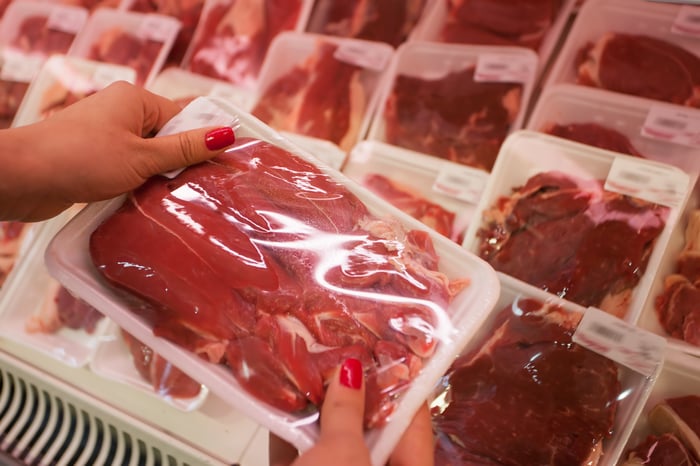 In April 2020, with Philippine herds decimated by ASF, the country upped its imports, causing a projected 26% pork import increase to approximately 308,650 tons for 2020, according to USDA figures reported by PhilStar Global.

Even more significantly for pork and meat producers, China banned German pork on Sept. 12, too. Despite German farmers' association DBV requesting the Chinese government only block porcine products from the region where the wild boar died from ASF, similar to European Union (EU) policy, according to Reuters, Deutsche Welle reported Saturday that China had gone ahead with a complete ban on German pork. The report also said the $1.2 billion worth of pork products Germany sends to China annually is not only 25% of the country's exports, but China's third biggest source of foreign pork.

China is the world's biggest consumer and importer of pork. The Asian country took a major food supply hit when it was forced to cull half of its commercial pig herd last year due to "pig Ebola." It was only last month, in August 2020, that it finally made headway in the "pork situation," with subsidies, imports, and the release of "frozen pork reserves" lowering prices 2.9% compared to July, according to XinhuaNet news. Now, shortly after this success, the severing of the German pork pipeline will likely drive up prices again and potentially give U.S.-based producers a tasty windfall of profits.

Can Tyson and other meatpackers gain?

While American meat producers such as Tyson and Pilgrim's Pride might appear to be shoo-ins to benefit from Germany's viral misfortunes -- and investors also thought so, bidding up Tyson's stock in the wake of the news -- meatpackers themselves have faced troubles caused by another pandemic virus, COVID-19. Tyson is still struggling with the added expenses caused by coronavirus outbreaks at its processing plants, which it says amount to an incremental $340 million.

Tyson wasn't the only business affected. Pilgrim's Pride missed analyst consensus expectations for the second quarter of 2020, due to the inroads of COVID-19 among workers and the loss of restaurant orders during lockdowns. Privately held Smithfield Foods, Reuters reports, was just fined $13,494 by OSHA for safety violations during the pandemic, a tiny sum in terms of the company's operations but potentially buttressing the case for private litigation under way against the company. Smithfield also says it paid $350 million in COVID-19 precautions during Q2 2020.

Looking more closely at the case of Tyson, during the recent third-quarter 2020 earnings call, President Dean Banks said the company operated at reduced capacity during the COVID outbreak, which strongly affected its pork production. He did, however, note its facilities have "safely resumed operations at or near full-scale production," and further stated that the company projects "capex spending of approximately $1.25 billion for the fiscal year as we progress with building additional processing capacity for case-ready fresh chicken, beef, and pork."

The addition of more meatpacking facilities, presumably better adapted to mitigate the effects of possible future "waves" of COVID-19, could be key in keeping the pork export supply channel strong into the medium term if China continues to ban European pork imports. Tyson Foods' more than $1 billion in liquidity could also aid its response to the export opportunity.

Beyond Meat in China

A very different American company, Beyond Meat, could potentially chow down on the meat import crunch launched by Germany's African swine fever problem. The plant-based meat maker got a hearty serving of good news late last week, when its rival Impossible Foods received another regulatory setback delaying its entry into the huge Chinese market.

Stealing a march on its competitor, Beyond said in a Sept. 8 press release that it is building two production facilities close to Shanghai. CEO Ethan Brown noted that this pair of processing plants includes "one of the world's largest and technologically advanced plant-based meat factories." Full-scale production is expected to begin there in "early 2021."

The picture isn't wholly rosy for Beyond Meat's prospects, however. While China consumes 27% of the globe's entire meat production, the country has used tofu-based meat substitutes for centuries. According to food investment company founder Tao Zhang, cited by Just Food in a June 2020 interview, U.S.-designed faux meats may be so different from these tofu "meats" that they will face an uphill battle finding widespread consumer acceptance. Zhang noted, possibly contrary to Beyond's confident expectations, that Western-style plant-based meat in China is "far from being mainstream, if compared with the U.S. market or European market."

During Beyond's Q2 earnings conference call, Brown said his company is experiencing "very significant growth and activity" in China. Perhaps significantly, though, he declined to provide supporting metrics of any kind, stating as regards restaurant sales of Beyond products, an obvious route to greater recognition and popularity: "I think we can expect some more activity there, although I can't make any promises or provide details."

Which is likely to be the bigger winner -- Tyson or Beyond?

For Fools investing in agriculture stocks or consumer staples stocks, answering the question of which major stock will see bigger benefits from the German pork bans in Asia, Beyond or Tyson, hinges on several factors. Two major diseases, COVID-19 and ASF, add to the uncertainty.

Beyond Meat is effectively immune to both of the pandemic viruses, human and porcine, currently circling the globe. Its supplies come from vegetative material, which can't succumb to pig Ebola or be banned for carrying it, and working conditions at its factories are seemingly less "friendly" to COVID-19 spread due to lack of crowding and the cold temperatures thought to aid transmission.

However, Beyond also seems to lack the culinary traction in China to make a huge spike in sales there plausible. Even once Chinese production is under way, adoption and spread of the plant-based foods through the market will likely prove slow due to their unfamiliarity. While Chinese sales are likely to gradually buttress Beyond's underlying strength long-term, helping to make it a better investment over time, a sudden gain from the German ASF situation seems unlikely.

The traditional meatpacker, Tyson, is operating in a much riskier space currently than its faux meat competitor, but seems more likely to see significant gains from Germany's porcine misfortunes. COVID-19 could cause more expenses for Tyson, or prompt plant closures if a "second wave" happens. Infection of American herds by pig Ebola would almost certainly cause China to ban all meat imports from the U.S., too, even if Tyson somehow kept its specific supply chain uninfected.

However, Tyson's strong liquidity position and its currently progressing increase of productive capacity suit it much better to gobbling up the profits offered by German ASF. Investors might well see its stock adjust upward in the short to medium term as its export channel, already one of its stronger sectors, gains even more from Chinese, Philippine, and Korean demand, and the same is true of other big animal protein processors in the U.S.