Please ensure Javascript is enabled for purposes of website accessibility
Log In Help Join The Motley Fool
Free Article Join Over 1 Million Premium Members And Get More In-Depth Stock Guidance and Research
By David Jagielski – Oct 12, 2020 at 6:34AM

Robinhood's Top 100 list has changed a lot since March -- but do any of the stocks that have fallen off of it belong on your watchlist today?

As a group, Robinhood investors tend to follow the latest hot trends in the markets. So while it's a safe bet that you'll find stocks like Apple and Tesla widely held in the portfolios of these retail and millennial investors, some companies that were popular with them prior to the February-March market crash have fallen far out of favor.

Consider three companies that were in the Robinhood Top 100 on March 8 that no longer are today: OrganiGram (OGI 1.81%), Salesforce (CRM 5.78%), and Costco (COST 1.14%). Let's take a look at what might have led those traders to sell them, and whether they're worth buying now.

OrganiGram never recovered from this year's market crash -- year to date, its shares are down 50%. That's a far worse performance than the Horizons Marijuana Life Sciences ETF (HMLSF 0.51%) has delivered; that fund is off by 28%.

Wall Street's sudden springtime plunge certainly inspired some investors to take a closer look at their holdings, and Robinhood users may have noticed just how unappealing an investment OrganiGram is. 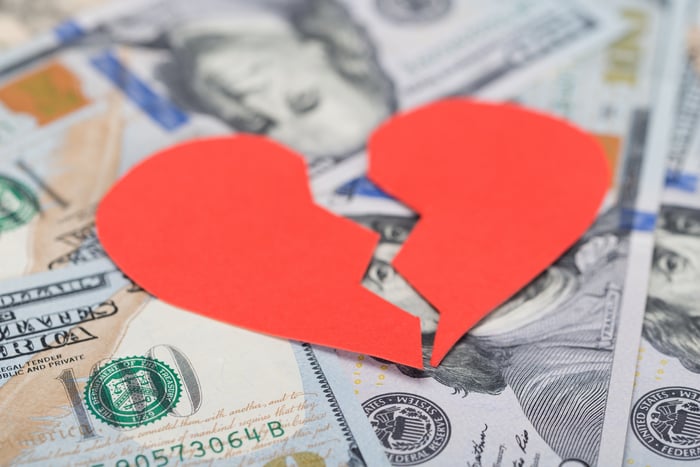 The Canadian cannabis company delivered its fiscal second-quarter report on April 14. Those results were for the period that ran through the end of February, when COVID-19 wasn't yet having an adverse impact on the company's business -- and even then, gross sales were down 18% year over year to 27.3 million Canadian dollars, while cost of sales rose by 45%. That drop in revenue came even as the company introduced new products including vape pens and cannabis-infused chocolates.

Data from Health Canada shows that while companies are producing significantly more marijuana edibles -- their inventory levels are up 85% from March -- sales of edibles have only risen by 29% over the same period. With disappointing growth numbers and what's looking to be an underwhelming edibles market, it's no mystery why so many Robinhood investors ditched this stock.

Salesforce is a more intriguing case. The company has continued to perform well amid the coronavirus pandemic. Its stock has recovered from the market crash, when it fell below $125 -- today, it's trading at more than double that price, up 60% year to date.

The technology company, which helps businesses manage their customer relationships from the cloud, soared in value after it released its fiscal second-quarter results Aug. 25. Sales for the period ending July 31 were up 29% to nearly $5.2 billion. That performance beat analysts' expectations, leading management to boost its guidance for the fiscal year.

More and more businesses are shifting their operations to the cloud, and Salesforce and its peers have benefited from the trend. That makes it a little surprising that this San Francisco-based company is no longer as popular with Robinhood investors as it was earlier this year. One possible explanation could be its sky-high valuation: Trading at more than 70 times forecast future earnings and 11 times sales, Salesforce is expensive, even by tech industry standards. Amazon, for instance, trades at a forward price-to-earnings ratio of 60 and less than 5 times its revenue.

The market crash may have spooked Robinhood investors, leading them to reconsider some of their higher-valuation investments -- Salesforce among them.

Costco is another company that has experienced sharply higher sales due to the pandemic; people are loading up on the essentials in case they have to stay at home for long periods, and buying in bulk to reduce the number of trips they have to make to stores. These trends play directly to Costco's strengths.

On Sept. 24, the mega-big-box retailer released its fiscal fourth-quarter results, which cover the period ending Aug. 30. Its revenue remained strong, rising 12% to $53.4 billion for the quarter. Full-year revenue of $166.8 billion was up by a more modest 9%. But that was a bigger increase than in fiscal 2019, when its sales grew by just under 8% to $152.7 billion.

As experts worry about further waves of coronavirus and the possible need for future shutdowns to combat them, Costco's sales continue to surge. On Oct. 7, it released its September numbers, reporting that net sales for the month rose by 17% year over year to $16.8 billion. Year to date, Costco's shares are up 24%, and before Salesforce's recent quarterly results and surge in price, its returns were comparable to the tech stock's performance.

While Costco is generating good growth numbers now, they just may not be enough to captivate Robinhood investors and their love for high-growth stocks. And although its shares trade at fairly modest multiples, with a forward price-to-earnings ratio of 37 and a price-to-sales ratio of about 1, investors are less willing to pay big premiums to invest in companies that aren't growing at a high rate. Finally, given the way many retail businesses have been struggling this year, it's possible that Robinhood investors may not be eager to hold many retail stocks in their portfolios.

Two of the three stocks on this list (sorry, OrganiGram) are soundly outperforming the S&P 500 this year: 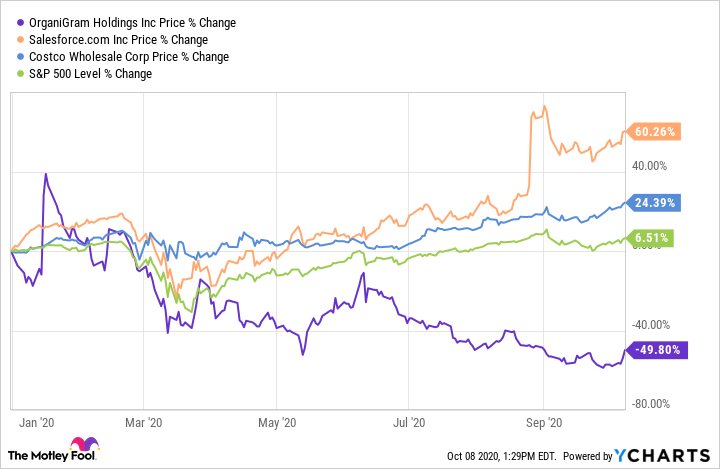 That said, the only one of these three that investors may want to consider adding to their portfolios today is Costco. Its shares aren't trading at a wild premium, and it's still generating solid growth. While the retailer's sales may slow down if the pandemic starts to subside, it's worth noting that the company was growing at a decent rate even before COVID-19 hit. It's a bit expensive, but of the stocks on this list, it offers investors the best mix of growth and value.