These stocks could make your new year even happier.

A new year brings all kinds of new opportunities. Those opportunities might seem overwhelming to investors with so many options to park your money. 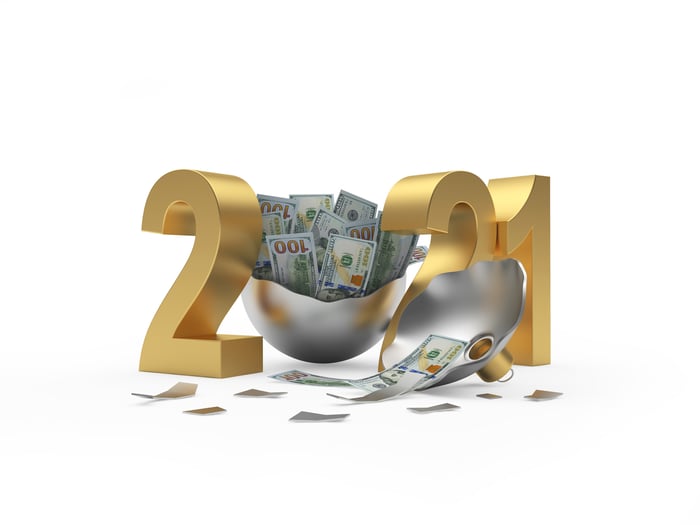 Load up your online shopping cart

Adam Levy (Amazon.com): I recommended Amazon in September when it was trading near its all-time high. The stock looks even better after a 10% pullback in share price.

Everything I said in September still applies today: The acceleration in e-commerce appears permanent and Amazon's proving its potential to produce exceptional operating profits over the long term. Not only that, but Amazon reported stellar third-quarter numbers in October. There are a lot of reasons to expect 2021 will be another great year for Amazon.

Prime membership has become more valuable to subscribers. Members are shopping more often and across more categories. They're also using their digital benefits like Prime Video more often, which should improve subscriber retention.

Amazon's advertising business is also growing. The company is taking a big portion of ad budgets as they shift from traditional TV to digital outlets.

Amazon Web Services, the company's cloud-computing segment, looks just as strong as ever. Sales growth is slowing, but operating margin expanded last quarter. Importantly, the backlog of contracts increased by 63.5% year over year to $44.8 billion, suggesting we may see AWS sales accelerate in 2021.

Additionally, Amazon should see its relatively high-margin third-party seller services continue to outpace its own retail sales as it brings more warehouse and fulfillment capacity online.

Finally, Amazon launched its online pharmacy in 45 states in November. The business provides additional value to Prime and is an opportunity for Amazon to take share of the $400 billion retail pharmacy market. On top of that, prescription data can inform Amazon's retail product recommendations and search ads and video ads on Fire TV.

I'm optimistic Amazon will continue to build on its momentum in 2021. With the pullback in share price over the last few months, it's worth buying a few more shares heading into the new year.

Timothy Green (AT&T): Telecom giant AT&T has made some major mistakes in recent years, the most costly of which was the acquisition of DirecTV in 2015. AT&T shelled out $49 billion for the satellite TV provider, or $67 billion including debt. It's now trying to sell the company as pay-TV customers vanish, but bids including debt are reportedly coming in at around $15 billion. If AT&T does manage to sell the business, it's going to take a massive loss in the process.

The $85 billion acquisition of Time Warner in 2016 could turn out to be another blunder. AT&T launched its HBO Max streaming service earlier this year, combining content from HBO with other content picked up in the acquisition. But HBO Max hasn't been a runaway success; the service had just 12.6 million activated users in early December, compared to over 86 million subscribers for the Disney+ streaming service from Walt Disney. And the rest of what is now called WarnerMedia has struggled during the pandemic.

AT&T has a lot of debt from these acquisitions, which adds risk. But the core wireless business is still a cash cow, and the stock is trading at a historically low valuation. AT&T expects to produce around $26 billion of free cash flow this year, compared to a market capitalization of just over $200 billion. And the dividend currently yields about 7.25%; the only time the yield was higher over the past few decades was a few months ago.

AT&T is out of favor right now as investors pile into high-flying growth stocks. But for patient investors who care more about fundamentals than narratives, buying AT&T stock could pay off handsomely in 2021.

However, even after this gain, the stock is still down more than 30% since the beginning of 2020. And it's because a ton of uncertainty still remains. Empire State is primarily an office real estate investment trust (REIT), with a portfolio that includes the iconic Empire State Building and other high-value New York City office buildings. The company also operates a significant amount of street-level retail real estate, as well as the Empire State Building's observatory, which has been must-do tourist attraction for decades.

At this stage, some very important questions remain. How long will it take to vaccinate the U.S. population and return tourism to pre-pandemic levels (or close to it)? Will the work-from-home trend dramatically reduce the need for urban office space, or will most companies provide a hybrid work environment like most employees want?

My feeling is that the vaccine rollout will happen on the shorter end of the timetables experts have been quoting, and that everyone who wants a vaccine will be able to get one by spring. And with major tech companies like Facebook and Amazon.com actually increasing their NYC office footprints during the pandemic, I don't buy the demise of offices that many are predicting. In short, I think the future will be bright for Empire State Realty Trust, and the stock could have a ton of upside in 2021.

A dividend stock that could easily double

The stock has soared close to 150% in 2020. One main reason for IIP's tremendous performance is that it has delivered consistently strong revenue and earnings growth. In its most recent quarter, for example, revenue nearly tripled year over year while earnings more than tripled.

There's another nice bonus with IIP's earnings growth. As a REIT, the company must return at least 90% of taxable income to shareholders in the form of dividends. IIP's dividend has risen nearly 400% over the last three years. Just a few weeks ago, IIP boosted its dividend again for the ninth time since the company's IPO in December 2016. This recent dividend hike reflected a 24% year-over-year increase and a 6% jump from its payout in the previous quarter.

I think that IIP is poised to potentially double or more again in 2021. All it should take is for the company to continue doing what it's been doing with adding more properties. That should be easier than ever with medical cannabis legal in 35 states and most of those markets still only in their early stages.

Growth, value, and industry dominance, all rolled up in one company

Sean Williams (salesforece.com): Whereas most software-as-a-service stocks are trading at nosebleed valuations, investors can buy into the top-tier name in cloud-based customer relationship management (CRM) software on the planet at more than 20% below its all-time high. Ladies and gentlemen, say hello to your top buy in January: salesforce.com.

Why Salesforce? To begin with, the opportunity for CRM software is enormous. Between 2019 and 2027, Grand View Research forecasts a near-tripling in global CRM market size to roughly $116 billion. And it's not just retail that's benefiting from access to real-time customer data and marketing solutions. The service industry, manufacturing, finance, and healthcare, are all discovering the benefits of CRM software in retaining clients and selling their products or services.

Salesforce also happens to be the most dominant force in the CRM space. According to Gartner, Salesforce's 18.3% global share of the CRM market at the end of 2019 was nearly as much as the next three top competitors combined! This makes it the logical choice for businesses with a consumer-facing presence.

Investors should also be excited about its $27.7 billion cash-and-stock deal to acquire Slack Technologies. Aside from longer-term synergies, salesforce will be able to cross-market its products to Slack's rapidly growing enterprise clients, much in the same way Microsoft uses Teams as a jumping-off platform to cross-sell its products.

Salesforce can double its sales over the next four years, yet is valued at less than 10 times Wall Street's fiscal 2021 revenue forecast. That's a bargain in the tech space, and all the more reason to make Salesforce the stock you buy in January.