Google wants in on the social commerce trend.

Everybody's doing more online shopping these days, and that hasn't gone unnoticed by tech leaders. Facebook (META 1.30%) and Alphabet (GOOG 1.96%) (GOOGL 1.96%) have expanded their shopping features over the last few months to capitalize on the trend.

After Facebook's early successes with social commerce, Google sees an opportunity to create similar features in YouTube. The push to get YouTube's two billion monthly active users to shop directly from the video sharing app could present a significant change to its business, accelerating revenue growth. 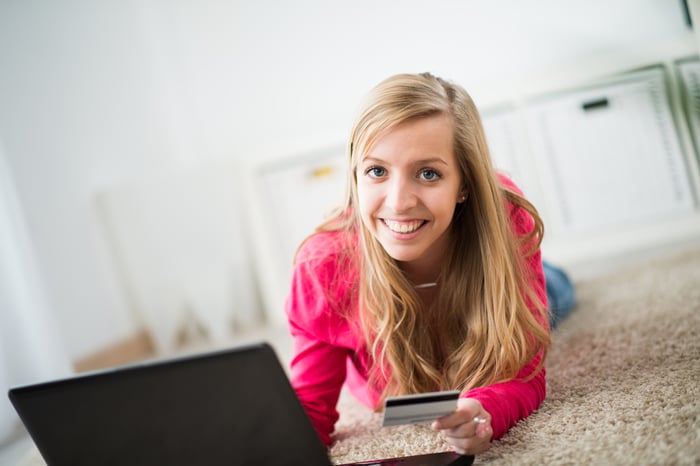 Instagram introduced shopping tags way back in 2016. The feature gives creators a way to link to pages where their audience can learn more about products featured in their photos and videos. It's since become a key piece of the FAANG stock's commerce strategy.

YouTube is testing a similar feature, asking some creators to use its software to tag and track products featured in their videos, according to a report from Bloomberg. YouTube can rely on the backbone established by its parent company though Google Shopping in order to funnel shoppers to product pages for checkout. That should enable the company to move quickly in building out a broad set of products creators can tag and monetize, catching up with Facebook.

Facebook has accelerated shopping efforts on Instagram as well as its flagship app. The introduction of Facebook Shops earlier this year opened the door for the company to take greater control over commerce on the platform, taking the user from discovery to purchase without leaving the app.

Likewise, Google started offering merchants free listings on Google Shopping and removed the fees for its "Buy on Google" checkout service. The move was designed to increase listings on the platform. YouTube's shopping tags will integrate with those listings.

A shift in business

Shopping tags may present a new way for YouTube video creators to monetize their content. They could take a commission or sell their own goods by utilizing the feature. YouTube has historically drawn creators to the platform through the promise of ad revenue sharing.

Other social media platforms don't offer much in the way of revenue sharing. Facebook is experimenting with the business model in IGTV, its YouTube competitor. TikTok offers a creator fund for top content producers. The ability to sell items on those platforms -- a reason Walmart wants a piece of TikTok -- offers one of the best paths forward for them to attract talent and monetize content.

But the opportunity appears big enough that YouTube thinks it can be a differentiator in terms of content and monetization. And broad adoption of forthcoming shopping features certainly could have a big impact on the business.

Currently, most YouTube ads are aimed at the top of the sales funnel -- they're all about introducing products and establishing brands. But facilitating the online shopping process all the way to the checkout page can be a lot more valuable for advertisers, who will likely pay more per ad impression if it leads to higher purchase rates, and those purchases are more easily linked to the YouTube ads.

Ultimately, shifting more ads to higher value placements lower in the sales funnel could accelerate revenue growth for YouTube. The service's sales have grown in the mid-30% range over the last couple years before running into secular headwinds this year.

If it had more e-commerce focused ads, perhaps YouTube's ad revenue would've increased more than the 5.8% it grew last quarter. Facebook's revenue, for example, increased 10.2% last quarter. Management cited strength in e-commerce as what propped up its ad revenue while most advertisers pulled back on spending across all platforms.

It's a big opportunity for Google to reinvigorate one of the biggest factors driving its revenue growth over the last few years. And with Facebook and other social media companies also pursuing this opportunty, it has a greater chance of working as people become more accustomed to social commerce.