Needham has initiated coverage on Cerence with a buy rating.

It might seem odd that connected car specialist Cerence (CRNC 15.35%) has seen its shares jump by more than 150% so far this year, considering that the economy has entered a recession and the cyclical auto market is often the first to get hit under those macroeconomic circumstances, but the company has been scoring numerous design wins throughout 2020.

That includes prominent deals like powering the voice control system in Volkswagen's new ID.3 electric vehicle, as well as collaborating with NIO, often billed as the "Tesla of China." With that momentum, can Cerence shares keep climbing? 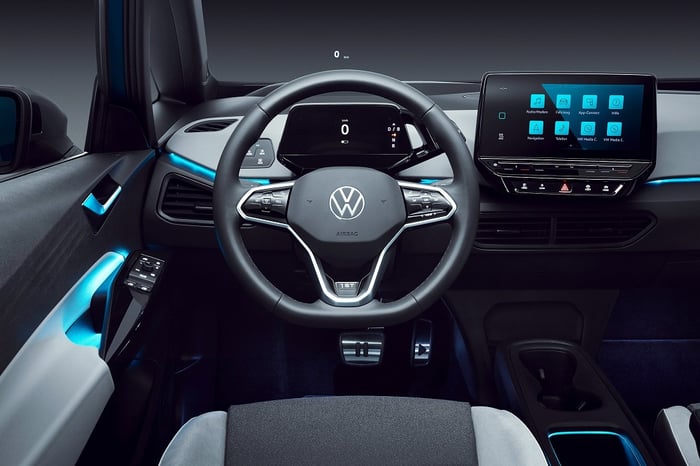 On Friday, Needham initiated coverage on Cerence, starting the stock off with a buy rating alongside a price target of $82, representing 54% upside from Thursday's closing price.

Analyst Rajvindra Gill believes that penetration of conversational artificial intelligence (AI) technology will more than double to over 60% in the next three to five years as cars continue to get smarter. Cerence, which was spun out of voice recognition specialist Nuance Communications last year, is the clear leader in the space, with a current installed base of 325 million cars that integrate its offerings. Half of all new cars shipped in 2019 featured Cerence technology.

There are numerous factors that will drive that adoption, in Gill's view. Vehicles are increasingly needing access to real-time data like mapping and weather information, drivers are using more voice-controlled virtual assistants than ever before, and automakers keep looking for new ways to address the problem of distracted drivers. The rise of ride-sharing and shared mobility will also boost demand, as will autonomous driving and increasing adoption of electric vehicles that generally tend to be more technologically advanced.

Cerence enjoys differentiation from its competitors by leveraging AI and deep learning to "form the building blocks for the company's voice engine," according to Gill. The company's currently sources of revenue include licensing, connected revenue, and professional services, but Cerence is working to build a software-as-a-service (SaaS) business to generate recurring revenue. That initiative is still nascent, but it holds considerable potential to monetize the existing installed base of vehicles.

The company's total addressable market is large and continues to grow. Additionally, Cerence has strong visibility into its future revenue pipeline since it currently has a backlog of approximately $1.4 billion. While the company warns that its backlog isn't a perfect proxy for future revenue because there are fixed and variable factors, CFO Mark Gallenberger expects half of the backlog to be recognized within the next three years, with the rest hitting the top line thereafter.

Gill's price target is based on a hybrid model that leans on a multiples-based analysis and a discounted cash flow (DCF) model.

Is This an Overreaction to Cerence's Earnings?
349%