Hopes for another round of stimulus checks faded after the first batch went out, in step with the slowing spread of the coronavirus over the summer. It looked like the world might be able to quell the pandemic before it raced out of control. Life was (sort of) easing back to normal for many consumers. More assistance meant to keep the economy propped up just wasn't needed, Republican leadership argued.

That attitude has changed over the course of the past month or so. The COVID-19 contagion is accelerating again, worse than ever. Shutdowns are again being implemented, renewing the discussion that more stimulus checks and government support is needed. It remains to be seen if those in power will do something with the various legislative proposals, including the latest that totals roughly $900 billion in government funding for various relief efforts.

But if that bipartisan relief plan pans out -- as some are hoping -- these three companies would be among the biggest beneficiaries. 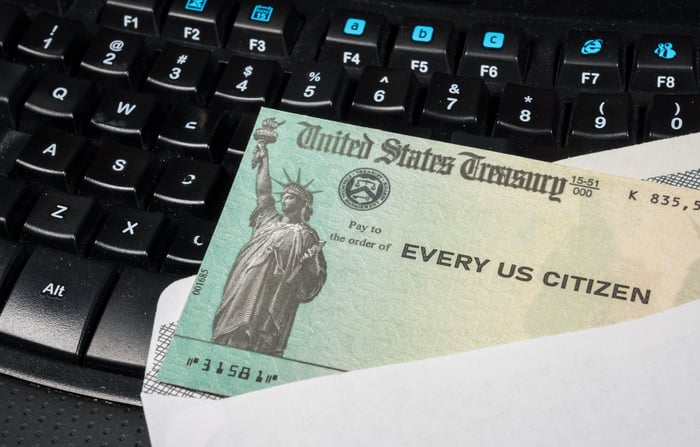 1. Walmart: Operating even when government shutdowns are in effect

It's almost become a cliche, but the fact is, the retailer that's most accessible to most U.S. consumers is already positioned to collect more than its fair share of whatever relief funding the government may end up sending out. That's Walmart (NYSE:WMT), with more than 5,000 stores in the United States alone. The company says more than 90% of Americans live within 10 miles of one of its locations. Most U.S. consumers visit a Walmart store at least once per year; many visit one of its stores or shop at Walmart.com every week. The company's already won the important battle of just "being there."

Walmart has already proven it's a winner when government-mandated shutdowns are in effect (Walmart stores are considered essential services and managed to stay operating during the last round of shutdowns). Consumers used those stimulus checks to purchase from whatever stores were still in operation, especially those that offered limited contact services like curbside pickup service. In the early days of the pandemic, the number of customers trying Walmart's curbside pickup for the first time quadrupled its normal pace. And that was before the retailer melded its two shopping apps and added all of its non-grocery inventory as a curbside pickup option in May.

The clincher: Most of the previous stimulus checks were spent on essentials like food and household consumables, playing right into the hand Walmart holds.

2. Sony: High demand for the PS5 means Sony will benefit whenever the checks finally arrive

Anyone hoping a stimulus check would arrive before any Christmas presents are bought and delivered need not hold their breath. It could take weeks before any funds finally start to trickle into bank accounts. That, in turn, means people won't be able to use this money to purchase the recently launched PlayStation 5 console from Sony (NASDAQ:SNY) before the end of this year.

That doesn't mean Sony wouldn't benefit from such a cash handout, though, for a couple of related reasons.

One of those reasons is that while the PS5 is one of this year's hottest holiday items, demand will still be robust for months (if not years) to come. Its predecessor -- the PlayStation 4 -- debuted in late 2013, but it didn't reach its peak annual sales until 2017. Consumers will wait for this next-gen console.

In fact, they have to. It's pretty much sold out everywhere right now.

The other reason Sony is still well-positioned to win over any spending driven by more stimulus checks mailed in 2021 is that the pandemic has left people with lots of extra time to play more video games -- and they have. Market research outfit reported late last month that spending on video games is up 33% for the past six months, with Q2's total spending reaching record levels.

For perspective, around a fourth of Sony's business is video gaming-related.

Finally, add retailer Best Buy (NYSE:BBY) to your list of companies that would see a business bump if more stimulus checks are in the offing.

It's a double-barreled bullish argument, the first of which is rooted in the video gaming demand that's already taken shape this year because of coronavirus-prompted shutdowns. Bored people need a place to purchase games and consoles and accessories. The second tailwind the company is catching is sustained demand for work-at-home tools like laptops, office furniture, and the like. Lots of companies that have already allowed employees to work from home this year say they're planning on letting them continue doing so well into next year, and perhaps forever.

Best Buy has been able to deliver on these changes thus far -- literally and figuratively. Overall revenue was up 21% year over year last quarter, driven by a 174% improvement in online sales that can be shipped to shoppers' homes or picked up at a nearby store. It was the best quarter the company's had in 25 years.

While CFO Matt Bilunas expressed doubt about how long this demand might persist, he may be understating the depth of the connection Best Buy has with consumers. GlobalData Retail's managing director Neil Saunders noted of Best Buy's recent quarterly report: "When it comes to higher-priced electronics, consumers are more confident purchasing from a retailer with stores," adding, "They also often prefer the immediacy of collection from store or curbside collection. Best Buy's model delivers on both these fronts and is serving it very well."