Please ensure Javascript is enabled for purposes of website accessibility
Log In Help Join The Motley Fool
Free Article Join Over 1 Million Premium Members And Get More In-Depth Stock Guidance and Research
By Luis Sanchez CFA - Jan 23, 2021 at 6:05AM

With nearly 3 billion users, Facebook (FB 1.18%)is one of the most popular websites in the world. Facebook doesn't just attract billions of users each month, it also collects copious amounts of data based on user profiles. The company has brilliantly turned its large treasure trove of users and data into a gold mine for advertisers.

However, the golden age of advertising on Facebook may be coming to end. That's because Apple (AAPL 0.17%) is rolling out changes that will limit the data advertisers will have to track user behavior online. Specifically, Apple will change its identifier for advertising (IDFA), which is a key tool for targeting users for advertising purposes. 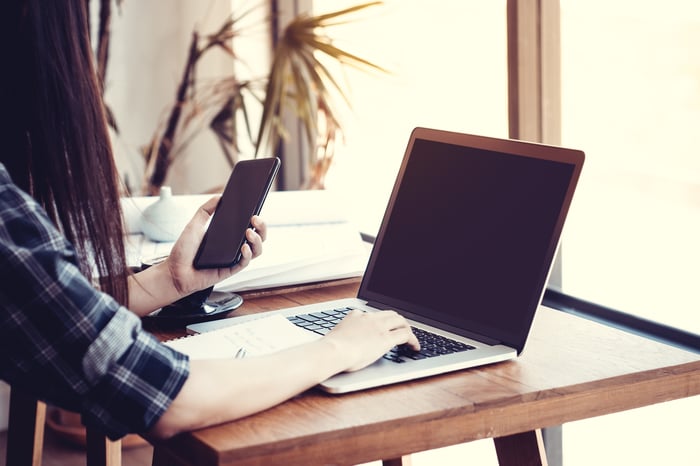 What Apple is changing

The IDFA is an identification code assigned to each individual iPhone, iPad, Mac, and Apple TV. By tracking the IDFA, marketers can know what websites a device has visited, what apps a device has downloaded, and what advertisements a device has clicked. This is allows advertisers to precisely target what products a user would likely be interested in based on their past behavior online.

Historically, Apple has provided advertisers virtually unfettered access to the IDFA. However, with the upcoming update to iOS version 14, iPhone users will need to opt-in to allowing advertisers to gain access to their data. The opt-in prompt will ask users to give access to their usage data to each mobile app that requests access. Flipping IDFA access from a default to an opt-in is expected to result in many users choosing to opt-out. This could make targeting with the IDFA much less relevant than it was in the past.

Online advertising companies like Facebook have predicated much of their advertising tools around targeting users through use of the IDFA. Therefore, the changes that Apple is making could end up being disruptive to the entire online advertising ecosystem. The changes are likely a net win for the consumer, since it will have the impact of strengthening privacy and security for iOS users. Perhaps it shouldn't be a big surprise that what is bad for Facebook is sometimes good for the average consumer.

Facebook doesn't disclose the size of its iPhone advertising business. However, we do know that, as of the most recent quarter, Facebook generated 40% of its revenue in the United States, with substantially all of that revenue deriving from advertising. Further, about 45% of smartphone users in the United States use an iPhone, according to eMarketer data. Therefore, it would be safe to say that the IDFA changes will impact a large slice of Facebook's user base, which could represent many billions in annual advertising revenue.

Facebook isn't going to just let its business suffer. The company is continuing to search for innovative ways to improve its advertising, with or without IDFA. For example, Facebook is encouraging websites to insert code that will report back to Facebook's advertising network when users have taken actions (such as download an app or make a purchase). If enough websites report user behavior back into Facebook's network, it can develop an alternative identifier of its own.

In some ways, Facebook benefits from the IDFA changes. The IDFA is primarily useful because it helps Facebook identify user activity that occurs outside of the Facebook platform. Even without the IDFA, however, Facebook is still able to track what users do on its platforms. This could make Facebook's proprietary data more valuable than it was in the past because there are fewer data points available to use for targeting.

The disruption to Facebook's advertising business could also incentivize the company to further its non-advertising business lines. The company has been rolling out a small business e-commerce initiative called Facebook Shops which enables merchants to sell products directly from their Facebook pages. Facebook could turn lemons into lemonade by building new businesses.

Of course, Facebook is in a unique position because it has such a large user base and a huge amount of capital to invest in new solutions. Smaller websites that do not have deep pockets could see their advertising revenues decline if their ads become less effective. Brands that have been effectively finding their customers on Facebook also stand to lose if they no longer find mobile advertising to be a productive channel.

The changes Apple is making to its mobile advertising tools create a degree of uncertainty for Facebook in 2021. However, Facebook is a scrappy and nimble company that, at least historically, has done a great job of adapting to its environment. For example, several years ago, the company successfully remodeled itself from being desktop-focused to being mobile-first. I wouldn't bet against Facebook finding a way to make its iPhone advertising business work even without the IDFA.