If it's harder to target ads, Facebook and Google could find their ad revenue seriously diminished.

When Apple announced new privacy protections at its Worldwide Developers Conference this summer, there wasn't a lot of fanfare about the move. In the day-to-day user experience, Apple would be adding another pop-up that will ask if you want to allow tracking by an app, but users are getting used to those pop-ups now.

For developers and internet advertising giants like Facebook (META 23.28%) and Alphabet's (GOOG 7.27%) (GOOGL 7.28%) Google, the impact could be enormous. They use an identifier for advertisers, or IDFA, in iOS devices to track and target users with ads all over the internet. The identifier tells these ad companies what users click on, what websites they're looking at, and where they are. This is how Facebook and Google can target ads down to a personal level, which is really how they make billions of dollars in advertising revenue every year. 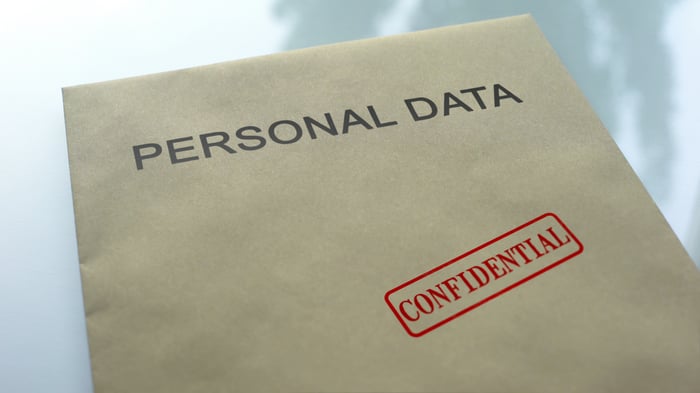 How the rich got richer

The value of the advertising platform Google and Facebook built is that it got bigger and smarter over time. Not only do you likely have accounts with both companies, the cookies they use in other websites and apps also provide feedback to their advertising algorithms. The more info they have, the smarter ads can be.

When you become an advertiser (which I've done personally), it's frightening how much detail these companies give you in order to target customers. You can say you only want to serve an ad to single men within two miles of your business who are interested in video games. And Facebook and Google can get that granular when they service their ads because they know that much about nearly every person with a smartphone.

Why is this important? As Facebook's and Google's code is used by more developers, they gather more data and can serve smarter ads, and advertisers are willing to pay more for those targeted ads. The smarter the ads get, the more money they get for ads -- and thus the more they can share with partners. That leads to more developers using their tracking code, which leads to them getting smarter, and so on.

Even as a small advertiser, I would want to go with the company that has the largest advertising network and the most data, even if its ads are more expensive, rather than a small upstart that may not target ads as well.

This dynamic I'm describing is why the rich literally get richer in the world of internet advertising.

As Facebook and Google grow their user databases and advertiser networks, it becomes more difficult for competitors to catch up. Snapchat (SNAP 9.93%) and Twitter (TWTR) are the two most-logical competitors, with hundreds of millions of users but a fraction of the revenue. And they're both losing money while Facebook and Google's parent Alphabet are printing money. This is because of all the advertising dollars that have been sucked up by Facebook and Google. 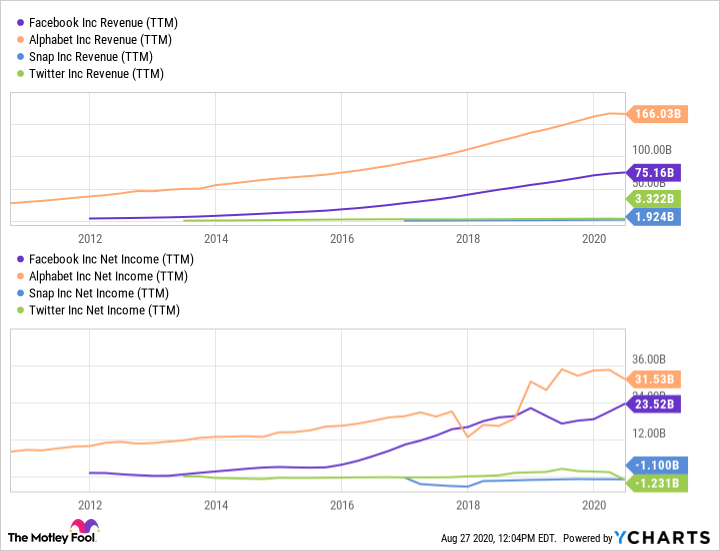 What we don't know is what the impact has been on potential start-ups that could disrupt the tech paradigm. What company couldn't get off the ground because it didn't have enough advertisers or couldn't break this duopoly of data that Facebook and Google have?

We'll never know, but this advertising engine is what makes both Facebook and Google what they are financially, and they rely on being able to track users on Apple devices to build those smart advertising networks.

An opening for competitors?

We don't know yet what the impact of Apple reducing the ease of tracking will be on tech companies or their partners. And Facebook and Google may find ways around Apple's new rules.

But this may be an opportunity for companies like Twitter and Snapchat or other advertising platforms to entice advertisers to take another look at their products. If the return on investment (ROI) on Facebook or Google goes down even slightly, trying a new network may be worthwhile.

App developers who serve up Facebook and Google ads could also see an impact. If their revenue from these ad giants goes down, they could seek out alternatives. Maybe that will be another social network, or maybe another ad network will take its place, or maybe they need to change their business models entirely.

It's hard to overstate how revolutionary this could be for the internet's financial model. We might be seeing Apple beginning to break the stranglehold of data Facebook and Google have on iPhone users' data, which drives advertising that funds huge parts of the internet. And that's no small feat in the technology world today.

What we don't yet know is if this will knock Facebook and Google down a notch and give an opening to a new advertising or financial model on the internet. If it does, that could be truly disruptive to tech stocks and the economics of the internet.

The company making the biggest stink about Apple's new privacy features is Facebook. It is more reliant on mobile partners than Alphabet's sprawling business, so the reaction is understandable. In a blog post this week, Facebook said its Audience Network advertising platform's revenue could be down 50% for its partners. Facebook doesn't break out Audience Network numbers specifically, but we know Facebook paid out over $1.5 billion to publishers and developers in 2018 and it has likely grown significantly since then. Given that this is just what's paid out, it's also safe to assume Facebook's annual revenue from the network is much higher than the $1.5 billion number. These aren't small numbers we're talking about here.

Facebook isn't going to be in dire financial straights because of this move, and may eventually find a way around it. But given the company's reliance on data to feed ads, this is a significant event. And with its shares trading at 36 times earnings, investors are still expecting a lot of growth from the company. A disruption to that thesis could hit shares hard.