Please ensure Javascript is enabled for purposes of website accessibility
Log In Help Join The Motley Fool
Free Article Join Over 1 Million Premium Members And Get More In-Depth Stock Guidance and Research
By Dan Caplinger - Jan 27, 2021 at 12:45AM

Could there be more gains ahead for these recovering companies?

In sports, few things are more exciting than watching a team come back from a seemingly insurmountable deficit to win. I grew up watching Hall of Famer Joe Montana in his heyday, taking his reputation as Notre Dame's "Comeback Kid" and turning it into four Super Bowls for the San Francisco 49ers. Since then, Tom Brady has made his own case for the moniker, with many rooting for the 43-year-old quarterback to lead the Tampa Bay Buccaneers to victory in Super Bowl LV.

Investors also love a good turnaround story. It's always inspiring to see a struggling business pick itself back up and recover from past challenges, especially when it results in big gains for those who saw it coming. 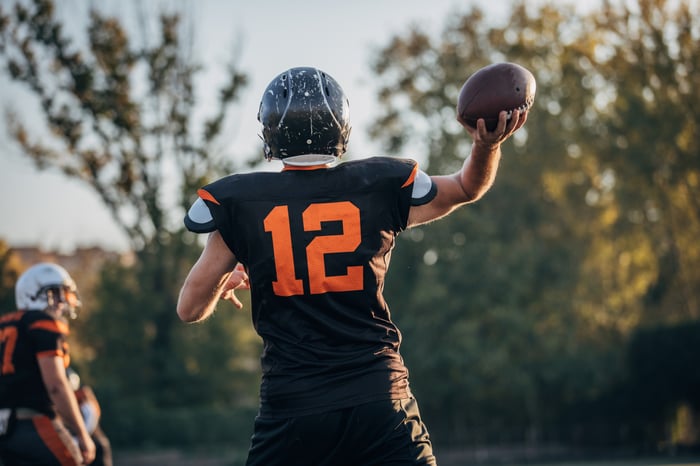 Already in 2021, several stocks are making their case to be the Comeback Kid of the year. Below, we'll look more closely at three candidates that have already doubled in 2021, with the goal of seeing whether they could be poised for bigger things to come. 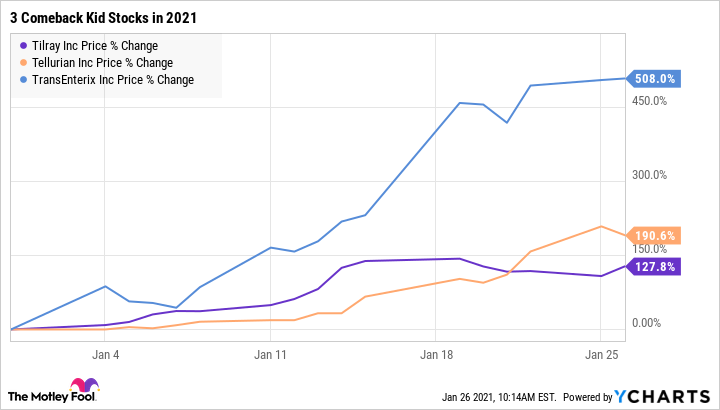 Tilray (TLRY) was one of the darlings of the stock market in the late 2010s. As marijuana stocks  came into the spotlight, Tilray was among the best-known cannabis cultivators in the market.

Yet when tough times struck marijuana stocks, Tilray took a substantial hit. Shares of Tilray lost more than half their value in 2020.

Unlike many companies, though, Tilray decided to do something about it. The cannabis cultivator announced ambitious plans in late December to merge with fellow pot stock Aphria (APHA). The merger will create the world's largest marijuana company by revenue, putting it in a strong position to compete against other cannabis industry giants, as marijuana investors hope that the U.S. will decriminalize marijuana at the federal level with a new administration in Washington.

Under the deal's terms, Tilray's stock will be the survivor, with Aphria investors getting 0.8381 Tilray shares per Aphria share. Yet Aphria is the larger company, and its CEO will lead the combined company going forward.

Since then, Aphria's solid gains have only helped to bolster Tilray's stock. Tilray is up more than 125% in 2021.

Even after its gains so far this year, Tilray is only back to where it started 2020. That gives the cannabis stock a lot more room to grow if marijuana markets in the U.S. begin to open up more aggressively for the Canadian company.

Tellurian (TELL 5.14%) was the hardest-hit stock among this group of three, with shares falling more than 80% in 2020. The natural gas specialist's link to the energy industry was the source of its downfall, as the COVID-19 pandemic rocked the energy markets and caused huge disruptions that sent the entire sector down sharply for the year.

Tellurian has hoped to take advantage of the boom in U.S. supplies of natural gas to export it to other countries. The company's proposed Driftwood liquefied natural gas (LNG) terminal in Louisiana hit snags early in 2020, putting the project's development in danger.

However, the energy market has strengthened somewhat, sending oil prices back above $50 per barrel. That doesn't directly affect Tellurian, but earlier this month, company co-founder Charif Souki said that the LNG specialist will likely start construction on Driftwood by the summer. That's made the stock nearly triple so far in January.

Despite the massive recovery, Tellurian is still down more than 45% since the beginning of 2020. Energy markets have a lot further to recover before conditions return to normal, but it'll be important for Tellurian to take full advantage of the improving environment if it wants to stay on course for a full comeback.

Finally, TransEnterix (ASXC -1.00%) went through a big setback in 2020. The stock lost almost 60% of its value during the year, as the tiny medical-device maker continued to see substantial losses without much in the way of revenue.

TransEnterix soared to immense heights in mid-2018 as investors praised the prospects for its Senhance Surgical Robotic System. Yet the company has thus far failed to deliver any significant sales of the system, posting only $8.5 million in revenue in 2019 and just $2.07 million in the first nine months of 2020.

The big news for TransEnterix recently came from Europe where regulators approved its Intelligent Surgical Unit accessory for the Senhance system. The so-called "augmented intelligence" system offers machine-vision capabilities that make it easier for surgical professionals to perform procedures. Investors have responded by sending TransEnterix shares soaring more than 500% year to date.

After its huge gains in 2021, TransEnterix stock is up more than 150% since the end of 2019. That makes the shares a big gamble, especially given the company's poor track record of sales. But if TransEnterix can start actually selling its systems, there could still be a lot more upside for the stock.

However, when things continue to go well, even bigger gains are possible. If you have a high tolerance for risk, then looking for stocks like these three can yield some promising candidates for your portfolio.

Among these three companies, TransEnterix and Tellurian are more speculative, relying on considerable execution to reach their full potential. Tilray offers the clearest pathway to continued gains in a favorable environment.