Please ensure Javascript is enabled for purposes of website accessibility
Log In Help Join The Motley Fool
Free Article Join Over 1 Million Premium Members And Get More In-Depth Stock Guidance and Research
By Howard Smith - Feb 8, 2021 at 11:17AM

Shares of Westport Fuel Systems (WPRT -4.80%) soared Monday morning after a report by Reuters on Friday evening that Amazon (AMZN 0.25%) is ramping up orders for trucks and engines that run on natural gas.

Amazon has ordered more than 1,000 engines to be supplied by a joint venture between Westport and Cummins (CMI -2.26%), according to Reuters. The engines will run on renewable and non-renewable natural gas. Renewable natural gas (RNG) is made from methane derived from the breakdown of organic waste collected from farms, landfills, wastewater treatment plants, and the like. 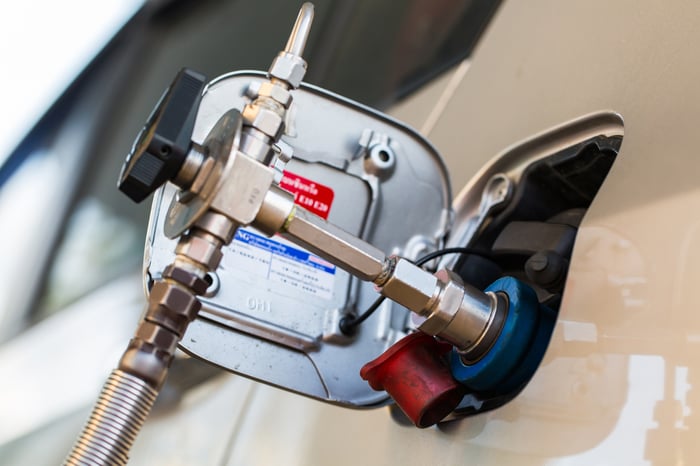 According to the report, Amazon has already ordered more than 700 class 6 and class 8 delivery trucks powered by compressed natural gas (CNG). "Amazon is excited about introducing new sustainable solutions for freight transportation and is working on testing a number of new vehicle types including electric, CNG and others," the company said in a statement reported by Reuters.

Westport offers a high pressure direct injection (HPDI) natural gas fuel system for heavy duty trucks. It formed the Cummins-Westport joint venture in 2001, and more than 80,000 Cummins-Westport engines are on the road, according to the company.

Amazon has said in its Climate Pledge agreement it plans to achieve net-zero carbon emissions by 2040. Westport shareholders today are cheering the inclusion of the company's technologies in those plans.