Please ensure Javascript is enabled for purposes of website accessibility
Log In Help Join The Motley Fool
Free Article Join Over 1 Million Premium Members And Get More In-Depth Stock Guidance and Research
By Courtney Carlsen - Feb 19, 2021 at 7:43AM

Root is looking to shake up the industry with plans to eliminate credit scores from its pricing models entirely by 2025.

Root (ROOT 1.56%) is an auto insurance company looking to flip the industry on its head. It plans to do this using telematics, a fancy way of saying it collects information on its customers' driving behavior through their phones and uses that to determine the cost of their coverage.

The company's ultimate goal is to eliminate the use of credit scores in insurance, making the case that insurance should be priced based on driving performance and not demographics. While other insurers have used telematics in pricing before, Root argues it's the only company using these insights to price insurance policies up front. As the company prepares to expand its operations from 30 states to 48 in 2021, let's dive more into this auto insurer, how it seeks to disrupt the industry, and if it's worth investing in now.

Behavioral data as a competitive advantage

Root prides itself on its ability to measure distracted driving. According to the National Safety Council, 1 in 4 accidents in the United States is caused by distracted driving. Root says its telematics are special, because they are "built on a proprietary integrated data claim set of complex behavioral data tied directly to actual claims experience." 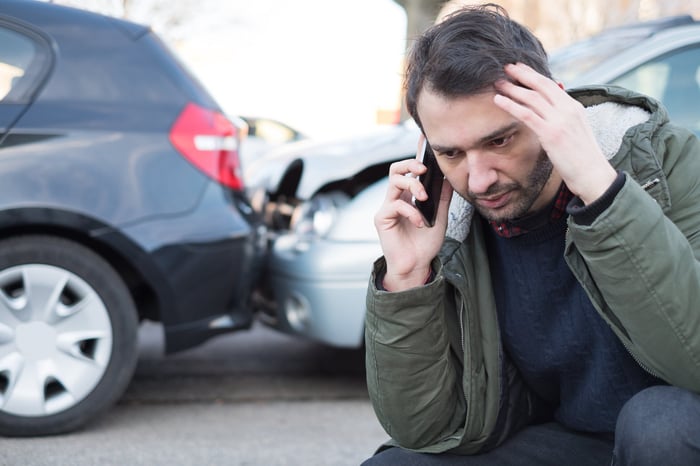 Root's goal is to implement a fully behavioral-based pricing model and eliminate the use of credit scores from rating factors entirely by 2025. Root does it by collecting vast amounts of data on its customers. The company noted in its letter to shareholders, "We collect roughly four terabytes of rich behavioral data on a daily basis directly from our customers' smartphones using the magnetometer, accelerometer, gyroscope, and other powerful sensors contained in those devices. These sensors allow us to track driving patterns that are most relevant in determining a person's driving ability, such as hard braking, abrupt turning and distracted driving."

It is through this rich data set that Root believes it has an edge on established competitors like Progressive, which is known for its Snapshot technology. Root's founders contend that its telematics are different, because it focuses on pricing a customer's insurance risk based on behavioral data first -- above any other factors. It notes that the use of telematics only comes into effect for other insurers only after it acquires the customer and spends a six-month term with them. Established insurers risk losing customers if they seek to implement telematics-based pricing across their customer base, the company argues.

Currently, Root's algorithms for insurance pricing are based on 10 billion miles of data collected and more than 200,000 claims. By the end of the third quarter of 2020, Root had collected 4 billion miles of data. Ultimately, Root expects to launch a new version -- its fourth -- based on this new data by the second half of 2021.

According to the letter, the third version improved loss cost accuracy by about 20%, and management is hopeful that the fourth version will produce more significant benefit. The idea by Root is a novel one, and it will be interesting to see how the insurer's earnings develop in the coming quarters.

Growing premiums, but no profits yet

In its most recent earnings, through last year's third quarter, net written premiums were up 59% from the same period last year, to $278 million. However, losses continue to pile up, with the company showing a net loss of $229 million in first nine months of 2020, compared to a $197 million loss in the same period in 2019.

The net loss is due in large part to its $303 million loss and loss adjustment expenses, the largest expense on Root's income statement. Losses increased during the period due to higher claims volume and reserves related to the growth in policies written.

Root has done an effective job of increasing net premiums written, but profitability is still a concern. The company expected to experience losses early on, given that it is young and growing its insurance book rapidly. In the first nine months of 2019 its loss ratio was at 113%, and that has improved to 90% in 2020. Over time it will look to cut losses by identifying high-risk drivers eliminating any unacceptable risk. In addition, beginning last July, the company is transferring 70% of premiums and related losses to reinsurers while collecting a 25% commission on written premiums, a move that will allow the company focus on growing premiums written.

A young company to keep an eye on

This is one company I'm not holding on to now, but will be keeping an eye on in the coming months. While the insurer hasn't shown profitability yet, it has managed to grow net premiums written at an impressive pace. A continuation of this growth, and an improvement in the bottom line, are what I would like to see next.