Please ensure Javascript is enabled for purposes of website accessibility
Log In Help Join The Motley Fool
Free Article Join Over 1 Million Premium Members And Get More In-Depth Stock Guidance and Research
By Adam Levy - Feb 21, 2021 at 8:30AM

About a year ago, PayPal (PYPL 5.96%) CEO Dan Schulman was talking about his aspiration for the digital wallet to reach one billion users transacting on the app daily. The company was coming off a fantastic year in which it added 37 million net new active accounts and increased transaction volume per account by about 10%. But at just over 305 million accounts, one billion seemed like a pipe dream.

Less than a year later, at PayPal's investor day, Schulman and his executive team laid out plans to reach 750 million active accounts in five years. And management showed a clear path for how the company will get there and how it can keep growing beyond that number. 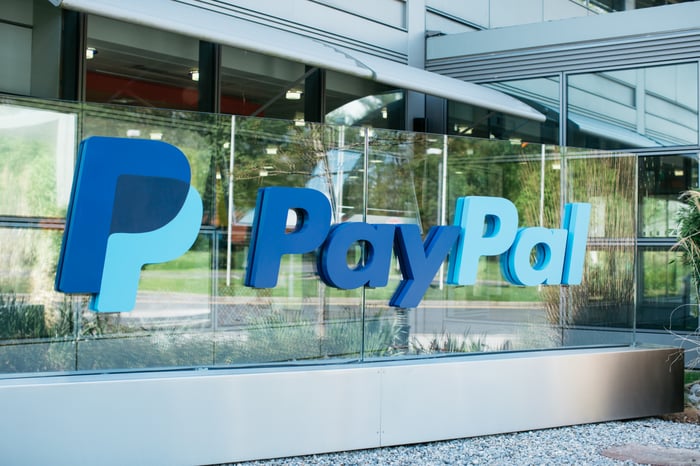 There's no doubt the coronavirus pandemic changed the way consumers shop and pay for their purchases. E-commerce adoption greatly accelerated, and PayPal was a big beneficiary of the shift from brick and mortar to online. The company added more accounts on both the merchant and customer sides in 2020 than any of the previous five years with 67.4 million customer additions and 5.3 million merchants joining its platform.

But PayPal didn't just sit back and let the secular trend work in its favor -- it actively leaned into the ongoing changes in consumer behavior.

For example, it accelerated its plans around in-store payments and QR codes, a key piece of Schulman's plans to increase PayPal engagement. It launched QR codes in PayPal and Venmo broadly in May as in-store shoppers looked to avoid handling cash or touching credit card keypads. The company also offers near-field communication (NFC) payments through smartphones and card payments through various payment card products.

PayPal launched other important products, including its buy now, pay later service and cryptocurrency trading. All of these new features led to greater engagement, payment volume, revenue, and retention.

PayPal expects to roll out even more new features in 2021, permanently accelerating its active account growth. With its fourth-quarter earnings release, management guided for 50 million net new actives in 2021, more than any previous year except 2020. And it could hit 2020 levels in 2022 and beyond with the "super app" strategy management laid out at its investor day.

The future of PayPal's digital wallet includes its existing payment capabilities plus the addition of more financial services, shopping, and digital identification. It aims to be a "super app."

On the financial services front, Schulman talked about high-yield savings accounts and stock investing. He said the company plans to expand its bill payment services, and it will advance the utility of digital currencies, both decentralized and digital currencies developed by central banks. PayPal is also planning to build budgeting tools into the app.

The company can use its 2019 Honey acquisition to build out shopping features. Users can create a wishlist and tell the app to alert them when it finds an item for the price they want to pay. And it can use its shopper data to present offers to users in what Schulman called "contextual commerce" -- merchants meeting the customer where they are instead of trying to bring customers to them.

All of these features provide valuable data for PayPal to improve its service, increase conversions for merchants, and lower its risk. Schulman gave the example that if someone uses PayPal bill pay and always pays their bills on time and in full, it can offer them more credit with its PayPal Credit or buy now, pay later services.

Ultimately, PayPal wants to become the app you open when you want to find something to buy and make it as easy as possible to pay for that item.

Big ambitions, but it's not overspending

PayPal CFO John Rainey laid out his expectations that expanding the feature set to make PayPal a super app will actually improve its operating margin and free cash flow despite the increased investment.

Early results from features it rolled out in 2020 give management confidence the new features will drive new active account growth and increase revenue per user. That scale leads to operating leverage, and Rainey expects non-GAAP operating margin to continue expanding from the 25% mark it hit in 2020.

PayPal has historically thrown off lots of free cash flow, and it expects that number to steadily climb from just under $6 billion in 2020 to more than $10 billion in 2025, good for over $40 billion in total free cash flow generated over the next five years. That gives the company plenty of capital to invest in its product pipeline and make strategic acquisitions where it sees an opportunity to buy instead of build. Meanwhile, management will maintain its share buyback between 30% and 40% of free cash flow.

If PayPal's efforts to expand its app work out as well as its product launches from 2020, it's easy to see the fintech company reaching one billion active accounts within the next decade as it becomes an integral part of many people's financial lives.