Please ensure Javascript is enabled for purposes of website accessibility
Log In Help Join The Motley Fool
Free Article Join Over 1 Million Premium Members And Get More In-Depth Stock Guidance and Research
By Keith Noonan - Mar 6, 2021 at 9:05AM

The single-occupant-vehicle specialist is getting slammed by the EV sell-off.

Shares of Electrameccanica Vehicles (SOLO -7.19%) slumped 19.8% in February, according to data from S&P Global Market Intelligence. Electric-vehicle (EV) stocks got hit hard at the end of the month's trading, and the single-occupant-EV specialist got caught up in the sell-off. 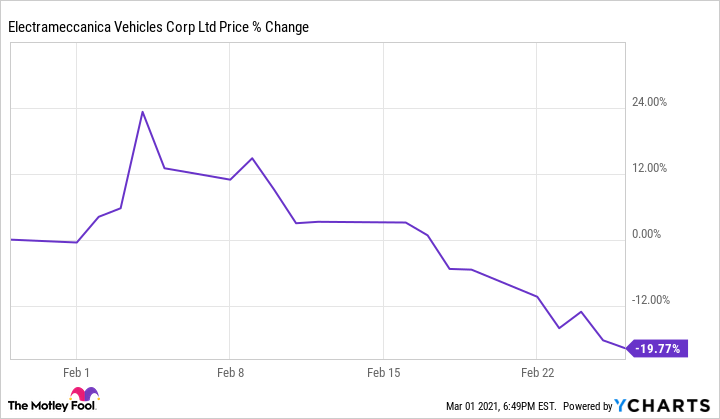 Growth-dependent tech stocks posted incredible performance for much of the first year following the coronavirus crisis, but it looks as if investors may be shifting to safer alternatives. Electrameccanica stock is still up roughly 179% over the last year despite the recent pullback, and it seems more volatility could be on the way.

EV stocks posted incredible performance in 2020, with industry leaders including Tesla and NIO rapidly increasing their vehicle deliveries and posting stellar stock gains. Electrameccanica was one of a handful of much smaller specialists that participated in the EV stock rally, despite their respective businesses being at much earlier stages.

Electrameccanica's September quarter saw the company deliver the first shipment of its SOLO electric vehicles in the U.S., and those EVs were for press events and other marketing initiatives rather than consumer sales. If the recent declines for EV stocks prove to be the start of a bigger bubble popping, Electrameccanica stock will likely experience more big sell-offs in the near term.

Electrameccanica has continued to lose ground early in March's trading. The company's share price has dipped 21.7% in the month so far. 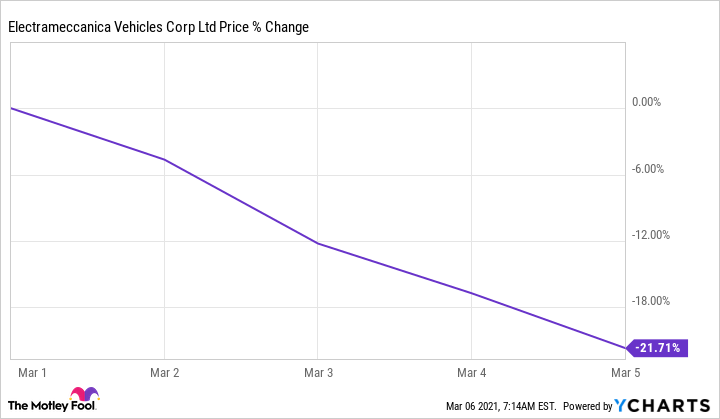 The stock gained roughly 4% on the month's first trading day, but it gave up those gains and slipped into negative territory in subsequent sessions as EV stocks continued to see a steep pullback.

Electrameccanica Vehicles has a market capitalization of roughly $541 million and is valued at approximately 36 times this year's expected sales.