Please ensure Javascript is enabled for purposes of website accessibility
Log In Help Join The Motley Fool
Free Article Join Over 1 Million Premium Members And Get More In-Depth Stock Guidance and Research
By Cory Renauer - Mar 15, 2021 at 7:47AM

Eli Lilly's latest Alzheimer's disease candidate is a terrific success and a disappointing flop at the same time.

Attention for Eli Lilly (LLY 0.34%) has been blowing up since the company announced success for its experimental new Alzheimer's disease drug. Unfortunately, the results strongly suggest that Eli Lilly and Biogen (BIIB -0.09%) have a lot more work to do.

How can a clinical trial that succeeded also foreshadow a slow-motion trainwreck? Strap in for some nuance. 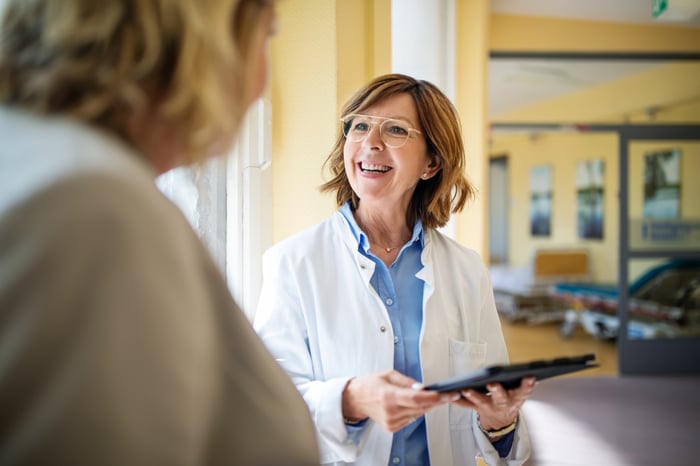 The phase 2 Trailblazer trial rounded up hundreds of people with early stage Alzheimer's disease and treated them with either a placebo or donanemab to see if the experimental antibody could prevent their disease from getting worse.

Earlier this year, Eli Lilly sparked a lot of hope for donanemab by telling everybody the Trailblazer trial met its main goal. That goal was a significantly improved score on a relatively new test to measure patients' cognitive and functional abilities. After treating 257 patients for 76 weeks, test scores for those given a placebo deteriorated 46% further than test scores for patients randomized to receive donanemab.

Donanemab works in the brain to reduce the formation of dangerous plaques made of amyloid protein fragments. After 76 weeks, comparing brain scans also showed huge amyloid plaque reductions for those given donanemab compared to those given a placebo.

The FDA has never reviewed an application for a potential new Alzheimer's disease drug based on a successful iADRS score. That could be a big problem for Eli Lilly because the Trailblazer study assaulted trial participants with a battery of different tests and the iADRS was the only measurement in which donanemab provided a statistically significant benefit.

Moreover, the benefit wasn't any better than Eli Lilly reported for solanezumab years ago. This twice-failed amyloid remover from Eli Lilly couldn't meet its primary endpoint in phase 3 trials, but it did lead to significantly improved iADRS scores.

Donanemab is similar to solanezumab, except it appears far more effective at removing amyloid deposits and preventing their formation. This is why Eli Lilly was eager to make the iADRS test a primary endpoint for donanemab trials, and extra careful to select trial volunteers that already had lots of amyloid deposits to remove.

If the donanemab program went according to plan, more amyloid to remove, plus a better drug to remove it should have led to an iADRS score benefit that rang clear as a bell. What happened was far less satisfying.

Patients began the Trailblazer trial with average iADRS scores of 106 points out of a potential 141 points. After 76 weeks, those given a placebo averaged just 3.2 points lower than those given donanemab.

Unfortunately, those given donanemab didn't improve or even hold steady. In fact, their average scores fell by 6.9 points.

The Trailblazer trial is another clear sign that removing amyloid deposits isn't a surefire way to stop the progression of AD, but it appears to work well for some. Decades from now we'll probably think of AD as a collection of different diseases, just one or two of which respond to drugs like donanemab on their own. In the meantime, U.S. regulators have a controversial decision to make that could help us understand the connection between amyloid knockdowns and the disease.

The FDA is eager to approve an amyloid-clearing AD drug from Biogen called aducanumab even though independent experts unanimously agree that pivotal trial results didn't show evidence of a benefit. If approved, widespread adoption of Biogen's drug could elucidate just which AD patients respond well to amyloid knockdowns and which don't. The line between Biogen's and Eli Lilly's attempts to treat AD isn't a straight one, but donanemab's future depends on the FDA's willingness to bend the rules for aducanumab.

Alzheimer's disease affects one out of nine adults over the age of 65 and a dearth of available treatments means the first one will become one of the top-selling drugs of its time. With such an enormous pot of gold at the end of this rainbow, we can't fault Eli Lilly for making further attempts with donanemab. Unfortunately, its chances of success don't look very good.