Please ensure Javascript is enabled for purposes of website accessibility
Log In Help Join The Motley Fool
Free Article Join Over 1 Million Premium Members And Get More In-Depth Stock Guidance and Research
By Lou Whiteman - May 10, 2021 at 6:31AM

A futuristic Pentagon program is beginning to come to life.

Skyborg, an experimental Air Force system designed to use artificial intelligence (AI) to guide autonomous drones in battle situations, has taken flight for the first time.

We're still a long way off from Terminator style cyborg warfare, but programs like Skyborg represent the early steps in a tech-fueled transformation that could eventually alter how wars are waged. The flight is a milestone in that effort, both for the Pentagon and key contractors including Leidos Holdings (LDOS 0.91%) and Kratos Defense & Security Solutions (KTOS 2.76%)that are leading the charge. 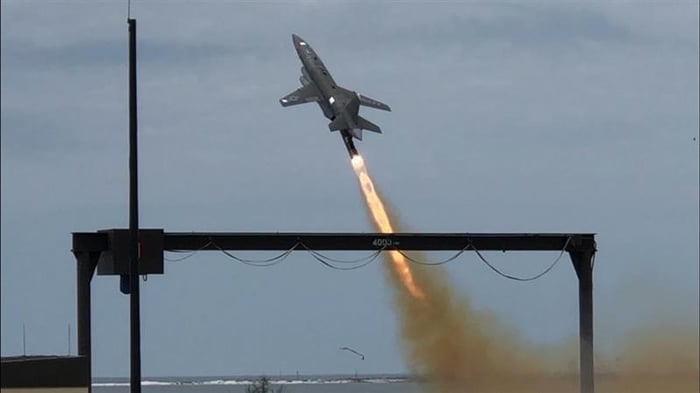 The "Loyal Wingman" comes to life

The Air Force conducted an April 29 test launched from Tyndall Air Force Base in Florida. A Kratos UTAP-22 Mako drone flew for 2 hours and 10 minutes, putting the Leidos-built Skyborg autonomous core system (ACS) to the test with a number of basic flight maneuvers.

"We're extremely excited for the successful flight of an early version of the 'brain' of the Skyborg system," White said. "These initial flights kick off the experimentation campaign that will continue to mature the ACS and build trust in the system."

Skyborg is a key part of the Air Force's goal to build a fleet of "loyal wingmen" drones, or unmanned aerial vehicles (UAVs), able to accompany crewed aircraft into battle. Adding drones to the battlefield has the potential to boost total firepower without substantially adding to the pilot ranks, and could make battle conditions safer for pilots by overwhelming enemy defenses and giving antiaircraft systems uncrewed targets to shoot at.

Ideally these UAVs wouldn't need remote pilots removed from the battle to operate. Skyborg is an attempt by the government to develop AI capable of interacting with F-35 fighters and other warplanes and reacting on the fly to a changing environment.

The military hopes the system will eventually enable the UAVs to take on missions that would be risky for human pilots. Although the first test focused primarily on the basics, follow-on flights are expected to put Skyborg to the test teaming with crewed aircraft and working with other ACS-controlled UAVs.

The program is part of a push by Leidos, the nation's largest government IT vendor, into hardware. In May 2020, the company won an initial $28.6 million to act as system design agent for Skyborg, with the total potential value significantly higher should the development progress as the government hopes.

As military hardware grows more sophisticated, an increasing part of the value offered by defense contractors comes from electronics and processing power, and not from metal-bending. Leidos is attempting to capitalize on this shift by moving into areas well beyond its traditional business of managing IT networks, and Skyborg is one example of that plan.

Kratos is a defense electronics and hardware company involved in several areas, but it is primary known for its UAVs. It's dangerous to read too much into the use of a Mako drone in this test, but if nothing else, it is a step in the right direction for the company.

Late last year, the Air Force awarded Kratos, Boeing (BA 0.28%), and General Atomics contracts to build a UAV prototype for the Skyborg program, with delivery expected by the end of May. As with Leidos, the initial contract was small (Kratos received just $37.8 million), but the Air Force has a pool of up to $400 million available for eventual orders and likely substantially more to come if the program is successful.

Kratos is submitting a separate UAV, its XQ-58A Valkyrie, in the competition. It is an aircraft the Air Force knows well. The service has been conducting test flights with the Valkyrie since 2019. But so far, those tests have not translated into a large production order for Kratos. On Kratos' May 5 earnings call, CEO Eric DeMarco said he has "every expectation that the Valkyrie is going to be deployed, and we are going to go into production on the Valkyrie."

Given the similarities between the Mako and the Valkyrie, the successful use of the Mako in this demonstration should give a boost to the company's chances.

Skyborg is a very small part of Leidos' business, but an important part of its growth story. The company's strategy to be the brains on advanced new hardware has taken on a lot of forms, from autonomous ships to space. And given the need for Skyborg to continuously evolve along with new threats and technologies, this could be the early days of an important and lucrative franchise for the contractor.

Kratos' involvement in the test is much more tenuous, as it is one of three vendors currently competing and is not a lock to continue forward. But the stakes are much higher. Kratos is currently valued at more than 35 times earnings and 4 times sales, frothy numbers for a defense contractor, based largely on the belief that its drones will eventually lead to outsize growth.

On the call, DeMarco said he expects the Valkyrie program will see "a very significant step up" in revenue from 2021 to 2022. Kratos has a number of different UAV programs it is working on, but success here would be a real boost to revenue and would help justify the stock's current valuation.

Investors have a lot of reasons to closely monitor how Skyborg develops in the months to come.

Why Kratos Defense & Security Solutions Stock Was Down Today