Please ensure Javascript is enabled for purposes of website accessibility
Free Article Join Over 1 Million Premium Members And Get More In-Depth Stock Guidance and Research
By Lou Whiteman - Updated Apr 12, 2019 at 11:08AM

The Valkyrie wingman has a successful test as a key competitor rolls out its rival concept.

The Air Force has completed a successful first test flight of a high-tech "wingman" drone developed by Kratos Defense & Security Solutions ( KTOS 3.50% ), an important milestone for the drone and the company that built it.

Kratos' XQ-58A Valkyrie demonstrator "behaved as expected" during its 76-minute inaugural flight over Arizona, according to a statement released by the Air Force Research Laboratory. The drone has a total of five test flights planned in two phases to evaluate system functionality, aerodynamic performance, and launch and recovery systems. A test flight is a long way from a full order, but it is still a big step for Kratos, which has a lot riding on its drone platforms. It was also a timely win for the company, coming barely a week after Boeing ( BA 7.54% ) unveiled its own wingman concept.

A bigger fleet at a fraction of the cost

Kratos, a onetime wireless-infrastructure vendor that pivoted to become a government contractor over the last decade, has a portfolio of defense electronics and other products. But the company is best known for its drones, both jet-powered "dumb" craft used today as target practice and its family of drones that it hopes will one day fly alongside aircraft that have a crew aboard.

The Valkyrie is the most sophisticated aircraft Kratos has launched to date, and it was developed to meet the Air Force's goal of adding firepower at a more-affordable price. The company and the Pentagon envision swarms of drones flying into battle with crewed aircraft like Lockheed Martin's F-35 to provide extra firepower and hopefully overwhelm and confuse enemy radar systems.

The Valkyrie is expected to sell for between $2 million and $3 million apiece, well below the $81 million current minimum for a single F-35.

The plane is the first of up to 10 tactical drone programs Kratos has in the works to address various uses and missions, some classified. Although it is unlikely they will all work as planned and end up as revenue producers, the company should be able to take what it has learned on the Valkyrie and apply it to these other programs, helping the company to move the winners to market more quickly.

Ready for a dogfight

The first flight comes on the heals of Boeing unveiling its similar Airpower Teaming System drone at an air show in Australia. The Boeing aircraft, which was developed in coordination with the Australian military, is still in the prototype stage, and a first flight is not expected until 2020.

But the aircraft is also slightly larger than the Kratos and has a flexible payload bay that can be modified for bombs and other uses. If it works as planned, Boeing presumably has a launch customer already locked up in Australia. And it can piggyback on the company's sprawling global sales network to win orders from allied nations around the globe without having to worry about sometimes-stringent U.S. clearances. 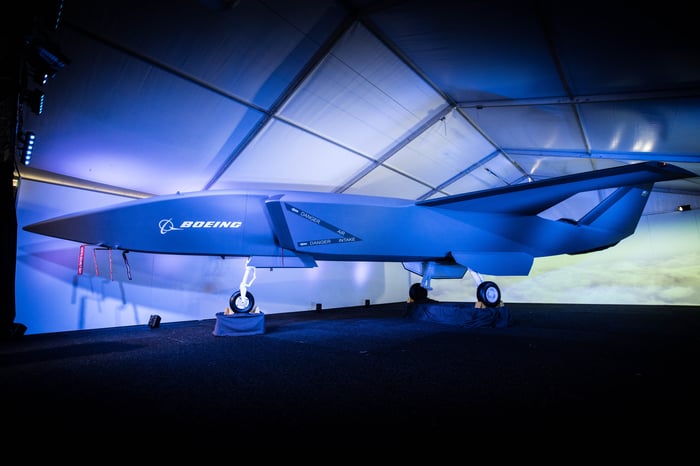 Kratos CEO Eric DeMarco was asked about the Boeing entry last month during an investor conference call. He responded that management has assumed competition was coming, given the attractiveness of the potential opportunity. DeMarco stressed the company's first-mover advantage, the Valkyrie's low price, and its ability to launch off a rail and be recovered via a parachute instead of requiring a runway as key advantages.

"We knew the competition would come, but we are very comfortable with our position, and the affordability for the performance is -- we believe -- it's unmatched, and that's from our customers," DeMarco said.

The volatility is fading

Kratos investors in years past endured the company repeatedly overpromising and underdelivering. A critical report by short-seller Spruce Point Capital Management last year arguing that the shares could fall by upward of 70%. Despite the turbulence, the stock in recent years has soared higher than the Valkyrie.

Shares of Kratos are up 322% over the past three years and 15.9% so far in 2019 alone, easily beating an index of defense shares. The shares also expensive, trading at 2.8 times sales compared to Lockheed Martin's 1.6x multiple and Northop Grumman's (NYSE:NOC) 1.59x. 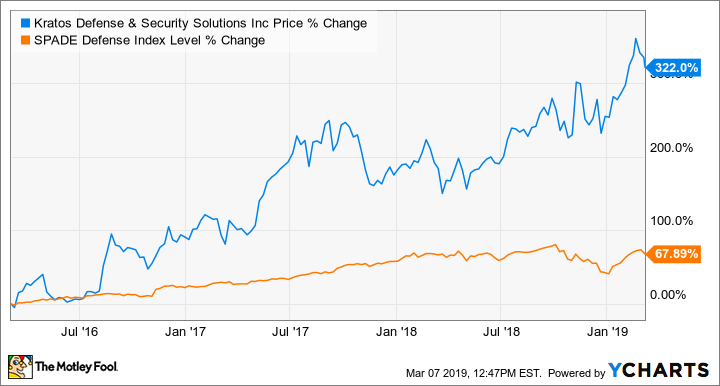 Investors should note that Kratos shares were flat to down slightly on March 7, the first trading day after the flight was announced. The Valkyrie taking to the skies should be a positive catalyst for the company and its shares. The lack of a reaction could be taken as a sign of how much potential good news is already priced into Kratos shares.

There's still room for Kratos to run, assuming these drone programs continue to progress. But it seems unlikely that investors will enjoy a repeat of the performance of the last three years. Kratos is growing up, and it's becoming less of a speculation as it matures.