Please ensure Javascript is enabled for purposes of website accessibility
Log In Help Join The Motley Fool
Free Article Join Over 1 Million Premium Members And Get More In-Depth Stock Guidance and Research
By John Ballard - May 22, 2021 at 7:00AM

We already know NVIDIA is ahead of its previous guidance. Does that make the stock a buy?

NVIDIA (NVDA 4.28%) has been one of the best performers in the tech sector in recent years as its name has become synonymous with artificial intelligence, self-driving cars, cloud computing, and high-performance gaming PCs.

After rival Advanced Micro Devices posted a terrific quarter in late April, investors will be looking for the same when NVIDIA reports fiscal first-quarter earnings on Wednesday, May 26, after the market closes.

Investors might be wondering whether the stock is a still a buy ahead of earnings, especially given the stock's high price-to-earnings ratio of 87. Let's look at what investors should expect, and whether the shares are a safe bet ahead of the next earnings report. 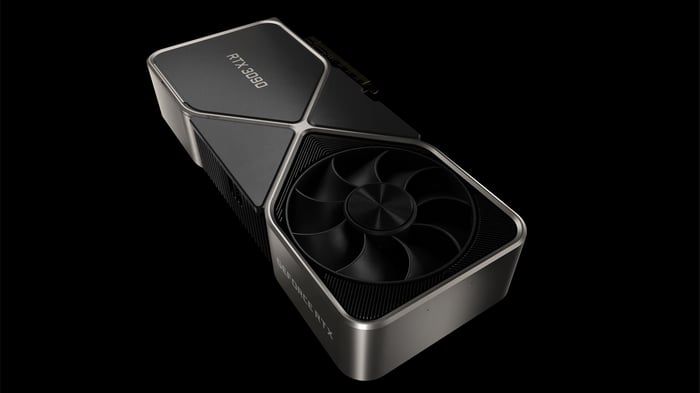 Why is NVIDIA so expensive?

It's difficult to find a weakness in NVIDIA's business. Except for a brief pullback in demand for its data center and gaming chips in 2018, NVIDIA has been delivering solid growth over the last several years.

But investors should be mindful of the risks involved with semiconductor stocks. The softening in demand that suddenly hit NVIDIA in the second half of 2018 highlights the risk of buying chip stocks at the wrong time. NVIDIA's stock price dropped 40% from August 2018 through July 2019 following a pause in spending from data center customers. Likewise, the collapse in cryptocurrency prices in 2018 caused an oversupply of GPU inventory in the gaming segment, leading to lower subsequent sales into calendar 2019.

Unless you're willing to hold shares through thick and thin, this episode is a reminder to be wary about buying chip stocks when business conditions are looking great. Demand can swing unexpectedly, which is important to keep in mind. 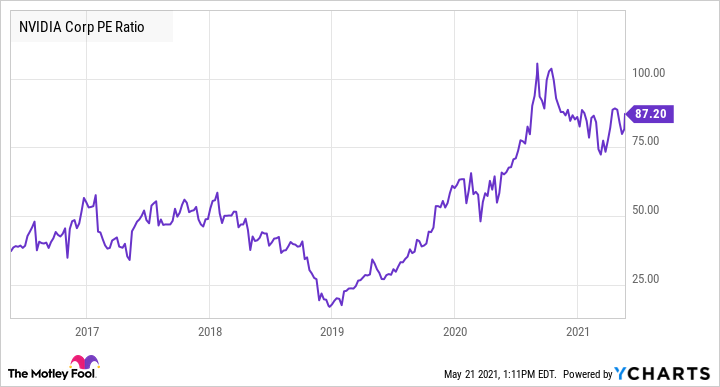 That said, some of the premium is warranted here. Over the last five years, NVIDIA's earnings per share have climbed from $1.08 to $6.90 through the end of fiscal 2021 in January. That improvement is due to better margins, as the product mix has shifted to higher-margin chips in the data center segment. Plus, people who play video games on PCs are continuing to upgrade to higher-priced RTX gaming GPUs, which is great for NVIDIA's bottom line.

Investors are also high on the company's growth prospects from the pending deal to buy ARM from Softbank Group for $40 billion, which is still on course to close in 2022. If the deal gets approval, NVIDIA would see its addressable market significantly expand. At NVIDIA's recent investor day, CEO Jensen Huang said, "Together, we will create new growth platforms for our partners and build a premier computing company for the age of AI."

Is it a good time to buy the stock?

NVIDIA told investors in April that its fiscal Q1 revenue was tracking ahead of the $5.3 billion it previously expected. During the investor day presentation, CFO Colette Kress said, "We are experiencing broad-based strength with all of our market platforms, driving upside to our initial outlook."

One catalyst that could provide additional upside is growing demand for NVIDIA's new Cryptocurrency Mining Processors (CMPs). NVIDIA launched this new line of chips recently to insulate its gaming segment from potential volatility if crypto demand drops off like it did in 2018. During the investor day presentation, Kress said that CMP revenue should be approximately $150 million in Q1, which is higher than the previous $50 million estimate included in the company's initial guidance.

It's impossible to know how the stock will respond to earnings news, but NVIDIA is plowing serious money into research and development to tackle some enormous market opportunities in the cloud and data center markets. If you like NVIDIA's prospects, I would consider averaging into the stock over several months instead of buying a full-sized position upfront ahead of earnings, especially at these high valuation levels.