Please ensure Javascript is enabled for purposes of website accessibility
Log In Help Join The Motley Fool
Free Article Join Over 1 Million Premium Members And Get More In-Depth Stock Guidance and Research
By Harsh Chauhan - May 18, 2021 at 6:15AM

The graphics specialist is going all out to stamp the authority of its RTX 30 series cards in the video game hardware market.

NVIDIA's (NVDA -1.53%) video gaming business has been moving the needle in a big way for the company in recent quarters, thanks to the launch of the RTX 30 series cards. The new graphics cards have triggered a massive upgrade cycle for NVIDIA because of their impressive price-to-performance ratio, creating huge demand that has outpaced supply so far.

The demand is so huge that NVIDIA expects supply to remain tight for most of 2021, and that could affect sales or cause a potential loss of market share to rival Advanced Micro Devices (AMD -1.67%).

But the graphics specialist has now found another way to bring its latest hardware to gaming enthusiasts so that they can upgrade their video gaming experience without having to struggle for availability. What's more, they can also avoid the inflated prices at which desktop GPUs (graphics processing units) are being sold due to lack of supply. 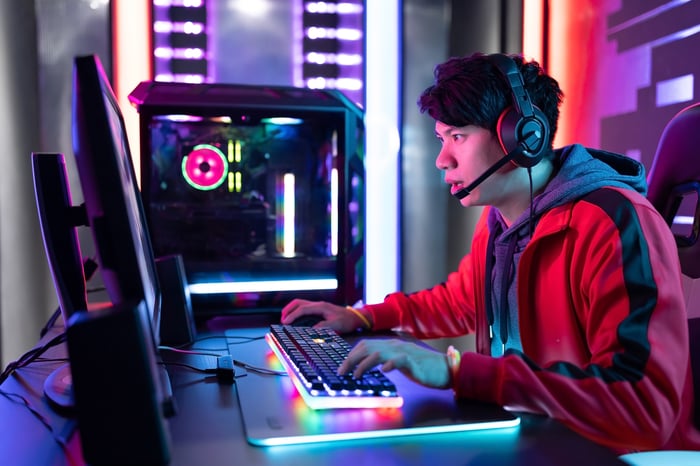 NVIDIA has just announced the release of new laptops powered by the RTX 30 series graphics cards starting from $799. The gaming laptops will be powered by the entry-level RTX 3050 Ti and the RTX 3050 GPUs and go all the way up to the more powerful RTX 3080. These laptops pack real-time ray tracing and deep learning super sampling (DLSS) image upscaling technology.

NVIDIA says that the new laptops are "twice as fast as previous-generation systems, delivering smooth, 60 frames per second gameplay at 1080p in popular titles such as Minecraft RTX and Call of Duty: Black Ops Cold War." The company also points out that the new laptops are ideal for e-sports enthusiasts. The RTX 3050 Ti laptops can deliver 144 frames per second and low latency while playing popular e-sports titles such as Valorant, Overwatch, and Rainbow Six Siege.

According to NVIDIA, these new gaming laptops give gamers using older machines a great opportunity to upgrade without breaking the bank. The chipmaker says that the RTX 3050 class laptops can boost gaming performance by as much as four times when compared to the older GTX 10 series laptops. Meanwhile, they also provide a nice entry point for those gaming enthusiasts who are starting out in competitive e-sports.

NVIDIA now offers more than 140 models of RTX 30 series laptops, including the higher-end models powered by the RTX 3060, 3070, and 3080 cards. The company says that the number of RTX 30 series-powered laptops that are thinner than 18mm has increased by five times over the previous generation RTX 20 series cards -- indicating that it is trying to cover all possible price points. That's a smart thing to do given the lucrative opportunity in the gaming laptop market.

A big opportunity is in the cards

A third-party research report expects the gaming laptop market's revenue to jump from $9 billion in 2019 to nearly $15.6 billion in 2027, driven by the growing adoption of e-sports and improved purchasing power. Additionally, Jon Peddie Research forecasts that the demand for ray-tracing software will increase at a rapid pace, clocking a compound annual growth rate of 53% through 2023.

NVIDIA already dominates the market for discrete GPUs used in desktop PCs, exiting 2020 with 82% of the market as compared to AMD's share of just 18%. The RTX 30 series cards helped NVIDIA claw a substantial chunk of the discrete GPU market back from AMD, as the latter commanded almost 31% of the space in Q1 2020.

NVIDIA will be hoping to recreate this magic in the gaming laptop market as well, though it may face stiff competition from AMD that's climbing up rapidly in notebook CPU (central processing unit) space. AMD's Ryzen 5000 mobile processors have been hugely successful as their sales are ramping up at double the pace of the Ryzen 4000 series.

AMD is looking to build on this success by launching 150 laptop models based on the Ryzen 5000 mobile processors in 2021. What may be concerning for NVIDIA is that AMD is reportedly looking to deploy its RX 6000 mobile graphics cards in laptops from this quarter onward, paving the way for all-AMD gaming laptops powered by its Ryzen CPUs and Radeon GPUs.

However, AMD is suffering from a tight chip supply, and that has reportedly kept the company from launching its laptop GPUs so far. This gives NVIDIA an advantage as its RTX 30 series laptops are already available on the market. Additionally, NVIDIA says that local system builders and OEMs (original equipment manufacturers) will also be offering the RTX 30 series laptops.

So, the combination of attractive entry-level pricing and better availability should give NVIDIA an edge over AMD in the gaming laptop market and help the former sustain the terrific growth of its video gaming business that accounts for half of its total revenue.