Please ensure Javascript is enabled for purposes of website accessibility
Log In Help Join The Motley Fool
Free Article Join Over 1 Million Premium Members And Get More In-Depth Stock Guidance and Research
By Dan Caplinger - May 24, 2021 at 10:19AM

Markets are performing well, and these stocks are helping lead the way.

Wall Street got the week off to a strong start on Monday morning, as major market benchmarks moved higher right out of the gate. Leading the way higher was the Nasdaq Composite (^IXIC 0.00%), which was up nearly 1.5% as of 10:30 a.m. EDT.

After a difficult time last week, some investors seemed to believe that the Nasdaq was simply due for a rebound. However, also helping were some positive comments from professional stock analysts, as they helped shares of Beyond Meat (BYND -2.70%) and Ollie's Bargain Outlet Holdings (OLLI -0.38%) move higher early Monday. Below, we'll look more closely at what's causing these two Nasdaq stocks to be winners.

Beyond Meat saw its stock rise more than 8% Monday morning. The maker of plant-based meat substitutes earned positive comments from a prominent set of stock analysts, bolstering confidence in the company. 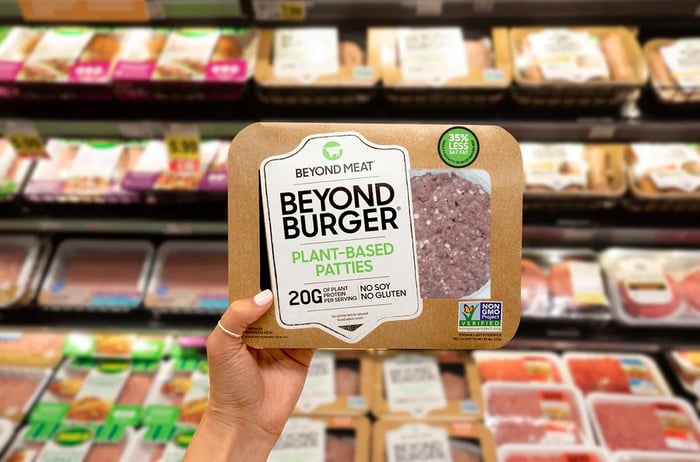 Analysts at Bernstein boosted their views on Beyond Meat, making a rare upgrade all the way from underperform to outperform. Usually, a stock with an underperform rating will first get upgraded to market perform or neutral rather than proceeding all the way to the equivalent of a buy rating. Bernstein also placed a $130-per-share price target on the stock.

Bernstein believes that after a decline in its stock price, Beyond Meat is well positioned to take advantage of more favorable trends moving forward. In particular, as the pandemic comes more under control, restaurant sales could recover even more sharply, and that would bode well for the partnerships that Beyond Meat has with key restaurant chains like McDonald's and Yum! Brands .

Investors got a reminder of the importance of plant-based foods when milk maker Oatly (OTLY -0.73%) went public last week. Beyond Meat has a longer leadership role in the space, and a recovery could help it get back on track fully.

Is Ollie's a bargain?

Elsewhere, shares of Ollie's Bargain Outlet were higher by 2%. The discount retailer didn't manage to get a double upgrade, but it still got favorable comments from a well-known Wall Street giant.

Morgan Stanley upgraded Ollie's stock from underweight to equal weight. The analysts seemed to hinge their views largely on the declines that Ollie's has seen over the past month, losing almost 20% of its value. That makes the risk-reward proposition on Ollie's stock more favorable, although even with the pullback, Morgan Stanley sees a fair amount of risk involved with the company.

Ollie's has managed to keep its business moving in the right direction. In 2020, despite the difficult environment, sales climbed 28% from 2019 levels. Comparable sales managed to rise 15.6%, and that pushed adjusted net income higher by more than 60% year over year.

Not everyone is convinced about Ollie's future prospects, as a couple of other Wall Street analysts have cut their price targets on the retailer's stock over the past month. Nevertheless, as the economy moves forward from the pandemic, investors are optimistic that Ollie's will keep resonating with shoppers and help bolster future results as well.

Dan Caplinger has no position in any of the stocks mentioned. The Motley Fool owns shares of and recommends Beyond Meat, Inc. and Ollie's Bargain Outlet Holdings. The Motley Fool has a disclosure policy.