What Are Stock Upgrades & Downgrades?

Find out what these Wall Street moves really mean.

When a stock analyst changes his or her opinion of a stock, making either an upgrade or a downgrade, it can sometimes lead to a large swing in stock price. This can present opportunities for investors and drive short-term gains, but it can also cause some pain if the analyst sours on a stock. 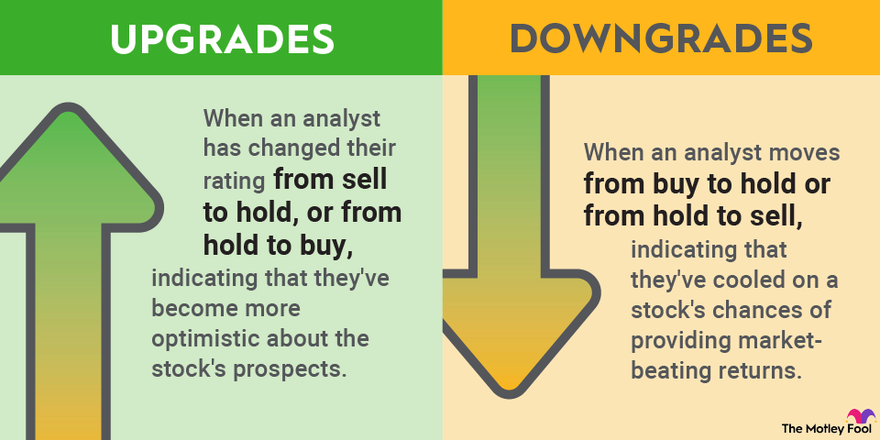 What does an upgrade mean for stocks?

A stock upgrade means an analyst has changed their rating from sell to hold, or from hold to buy, indicating that they've become more optimistic about the stock's prospects.

Because Wall Street analysts get a lot of attention from the trading community, an upgrade tends to lift share prices in the short run. That's arguably because the clients of the analyst issuing the upgrade all flock to buy the stock following the analyst's recommendation; that increased demand for shares boosts the price.

Analyst upgrades are often reactionary, meaning they occur after something has already changed the story. A strong earnings report, for example, can trigger an avalanche of analyst upgrades. In this case upgrades don't really give investors any new information.

Mutual funds give investors exposure to lots of different kinds of investments.

Bonds are often considered a "safe" investment, but are they right for you?

Quite simply, this is when interest earns interest. How do you get it working for your portfolio?

When to Sell Stocks

So when is it time to exit your position in a stock? Consider these factors.

What does a downgrade mean for stocks?

A stock downgrade occurs when an analyst moves from buy to hold or from hold to sell, indicating that they've cooled on a stock's chances of providing market-beating returns.

When a stock is downgraded, it can prompt traders to sell the stock on the assumption that others will be doing the same. The collective result of this selling can push down the stock price, sometimes dramatically.

A downgrade can sting for investors who own a particular stock, since it often results in a lower stock price. But for long-term investors who disagree with the analyst's conclusion, the lower price offers an opportunity to buy the stock at a discounted price, potentially boosting returns if the analyst turns out to be wrong.

Downgrades can occur in reaction to news, just like upgrades -- for example, if a company whiffs an earnings report and misses expectations. Analysts also sometimes downgrade a stock due solely to valuation. If an analyst believes a stock has increased in price too much to be justified by the underlying company's profits, the analyst could downgrade the stock despite no change in the company's long-term prospects.

While stock upgrades and downgrades often drive trading activity in a stock, long-term investors should think for themselves. Analysts' opinions can be useful, but they're far from the only thing to consider.