Please ensure Javascript is enabled for purposes of website accessibility
Log In Help Join The Motley Fool
Free Article Join Over 1 Million Premium Members And Get More In-Depth Stock Guidance and Research
By Eric Volkman - Updated May 20, 2021 at 7:15PM

A peer's stock market debut underscores the popularity of alternatives to traditional foodstuffs.

Beyond Meat (BYND 0.08%) closed 3.6% higher on Thursday, more than triple the percentage gain of the S&P 500 index. That move seems tightly related to the stock market debut of alt-milk products specialist Oatly (NASDAQ:OTLY), which soared on its first day of trading.

After it sold for $17 per share in its initial public offering (IPO), Oatly's American Depositary Shares (ADSs) closed nearly 19% higher. There are numerous factors behind this, not least the fact that the company's backers include stratospherically popular celebrity Oprah Winfrey, and its key product (oat milk) is available at Starbucks. 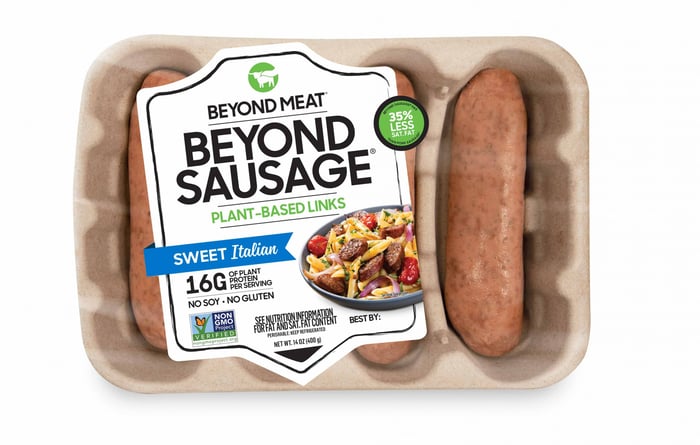 Beyond Meat belongs to the same broad product category as Oatly, since its stock in trade is plant-based food with the taste and texture of beef, chicken, pork, etc.

Both companies are well known to vegetarians, in addition to those who simply want to reduce the food chain's traditional burden and reliance on animals. Also, like Oatly, Beyond Meat has made great strides in its relatively short life as a company, getting its products on grocery shelves and as options in big chain and/or franchise establishments.

While Oatly's hot start doesn't directly affect Beyond Meat, it clearly illustrates the widening investor belief that the alt-foods segment has a bright future full of growth. Plus, at the moment, there are precious few alt-food producers that are publicly traded.

Considering that, the popularity runway could be quite long for Beyond Meat assuming it continues to post encouraging growth numbers.