Root (NASDAQ:ROOT) is a young company looking to revolutionize auto insurance by eliminating the use of credit scores in pricing insurance policies through the use of behavioral-based data.

However, the insurer has had a tough go of it since going public in October 2020, with its stock down 79%. The most recent quarter didn't do the company any favors, when its revenue took a hit and its net loss for the quarter was four times larger than the same quarter last year.

The young insurer is experiencing growing pains as it expands its services across the U.S. While the company has upside potential, there are also obstacles in its path that it must overcome before I would consider it a long-term investment

Root wants to "revolutionize personal insurance with a pricing model based upon fairness" and it competes in the auto insurance industry, which it believes is "ripe for disruption."

The insurer has the goal of eliminating the use of credit scores in underwriting insurance policies. It believes that insurance should be based off performance and not demographics, and it does this by using telematics. If you're not familiar, in auto insurance, telematics is when insurers collect driving data on customers that gives those insurers insight into customer's driving habits. Progressive was one of the first insurance companies to utilize telematics when it introduced its Progressive SnapShot product back in 2011. 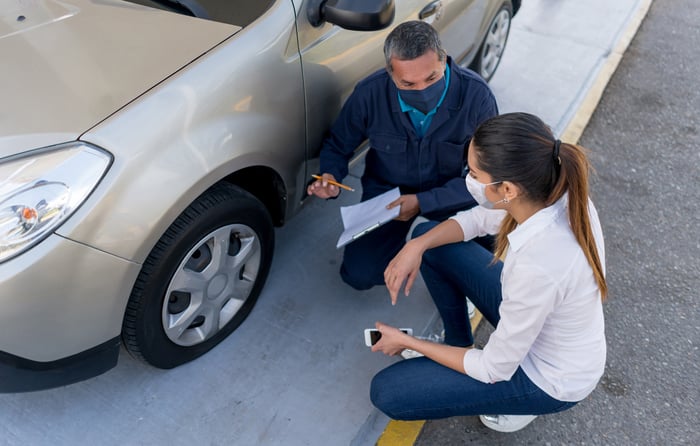 Root believes that it can price insurance more fairly using its behavioral-based pricing model. This model collects vast amounts of data on a customer's driving behavior through various sensors in their cellphone, and runs the data through machine learning algorithms that it uses to price insurance policies.

Struggling to get off the ground

In its most recent earnings period, Root saw direct written premium increase 24.5% to $177 million. In this regard, the company continues to expand. However, net premiums earned were down 30% to $81.2 million. As a result, revenue dropped 26% to $90 million and the company posted a net loss of $179 million, an increase from its $39 million net loss in the same quarter last year.

The biggest factor affecting Root this quarter was a change to its reinsurance structure. Reinsurance can be thought of as insurance purchased by insurance companies. Companies like Root use reinsurance to spread risk, which can limit its maximum loss in case of a catastrophe.

Root uses reinsurance to protect it from excess risk and says it is key to the company's "capital light" model. The company says the change in reinsurance structure comes as part of its "evolving approach" to its reinsurance structure, which allows for top-line premium growth without increasing regulatory capital requirements. It believes this approach is key to rapid expansion. During the recent the company ceded 55.1% of its premiums to reinsurers while it only ceded 23.8% of its premiums to reinsurers last year.

During its earnings call, Root management revised its top-line growth and profitability guidance for 2021. The insurer expects direct written premium growth for the third quarter to be in the mid-single digits while fourth-quarter growth is expected to decline. It reduced its previously guided numbers due to the company reducing current marketing spend, impacting near-term growth with hopes of more efficient long-term growth.

Root CFO Dan Rosenthal said that this revised guidance did not include the company's partnership with Carvana (NYSE:CVNA), which was announced on Aug. 11. The partnership with Carvana, a leading platform for buying and selling used cars, makes Root the exclusive partner to develop auto insurance solutions on Carvana's platform. Root CEO Alex Timm said:

This integrated solution will give Root exclusive access to a scaled and growing channel of prospective customers at the important insurance decision point of buying a car, which positions us to deliver on an immediate customer need and drive sustainable policyholder growth.

A company with potential but lots of work to do

Root is a young company trying to disrupt the established insurance industry. The company believes its usage-based insurance model is fairer and ultimately more profitable over the long run.

However, the company has struggled to turn a profit, and its most recent quarter shows how difficult it has been to scale to this point. After posting increasing losses year over year, Root still has quite a bit of work to do before I would consider it as a long-term investment. The partnership with Carvana is a step in the right direction, but I believe purchasing shares now is a high risk investment in a company with an uncertain future.