Please ensure Javascript is enabled for purposes of website accessibility
Log In Help Join The Motley Fool
Free Article Join Over 1 Million Premium Members And Get More In-Depth Stock Guidance and Research
By Rhian Hunt – Sep 13, 2021 at 8:53AM

After reporting its first-quarter fiscal 2022 earnings results the day before, National Beverage (FIZZ -0.60%) stock price climbed more than 12% on Sept. 10, dramatically reversed what had been a slow decline in its share value over the past six months.

The earnings results beat analyst expectations on both the top and bottom line, and they managed to come despite raw material shortages and supply chain hiccups. Things look positive in general for the company, but will its fizzy good fortune stay carbonated, or begin to go flat again? 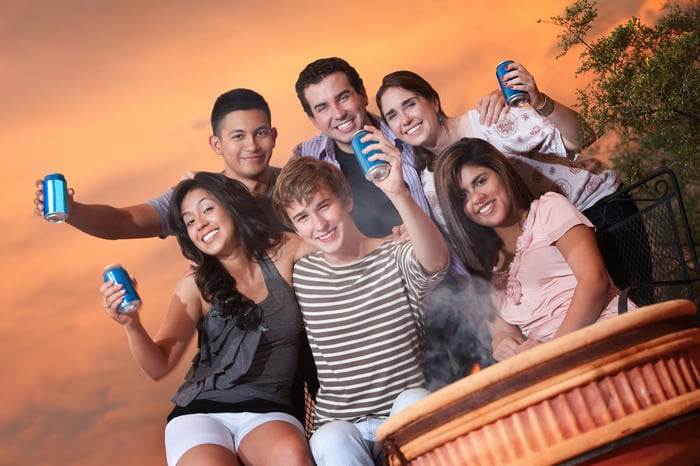 The parent company of well-known brands such as Shasta sodas, La Croix sparkling water, and Rip It energy drinks, National Beverage appears to have reversed a slow downtrend that began in late winter 2021. After a brief stint as a meme stock in late January, when its share price rose above $90 for a short time, the company has been a favorite target for a few bearish analysts and now has short interest of around 26%.

As recently as July, right after its fourth-quarter and full-year earnings report, analysts such as CFRA Research made gloomy forecasts for the latter half of 2021. CFRA in particular rated the stock as a "sell," citing National Beverage's likely inability to raise retail prices to offset increased input costs. Earlier in the year, UBS analysts pointed to similar factors as the basis for its own bearish assessment.

However, National Beverage disproved this thesis with its very next earnings report, the current first-quarter filing. Revenue rose 6.3% year over year for fiscal Q1, reaching $311.7 million, even though it raised prices by 4.7% during the quarter. The price increase resulted from rising labor costs, packaging expenses, and raw material inflation, the last a reference to the current aluminum shortage that's driving can prices to 10-year highs and sending the stock of aluminum producers such as Alcoa (AA -1.28%) skyrocketing.

Nevertheless, National Beverage increased its sales case volume by 1.5% despite its sharp price increase. These two elements -- higher prices coupled to a rising volume of sales -- accounted for its revenue jump, while at the bottom line, adjusted earnings per share of $0.58 rose approximately 5.5% year over year.

Some factors are favorable for National Beverage

Looking past the shipping, labor, and aluminum can challenges, both PepsiCo (PEP -0.52%) and Coca-Cola (KO 0.10%) noted a powerful mid-2021 increase in demand for soda and other beverages. During its Q2 earnings call, Coca-Cola's CEO James Quincey noted increased travel, restaurant dining, gatherings, and public events as driving soda demand, while "at-home volumes remained robust, leading to broad-based share gains in the quarter." PepsiCo said much the same and even put enough trust in the "soda surge" to increase its guidance for the year's second half.

The relative immunity of National Beverage's demand growth to the company's increased prices also seems to buttress its claims of significant customer loyalty. In the company's press release, management notes its core "Power+ brand volume grew 5.6%," notwithstanding its price increase. It goes on to argue that "this reflects the preference consumers have for our great-tasting beverages," and it supports that claim by pointing out "the substantial price discounting employed by certain competitors to promote their sparkling waters."

In fact, contrary to the bears and shorts, National Beverage probably would have seen even higher sales and revenue growth in spite of its price increase, had the current production bottleneck not gotten in the way. The company's quarterly report to the SEC notes that "labor, raw material, and transportation constraints impacted our ability to meet customer demand."

While no specific metrics are given, this statement suggests that National Beverage's volume of sales could have been measurably higher, boosting revenue and earnings even more, if not for a lack of materials to meet demand. When the supply chain and raw material situations eventually normalize, at least some of this pent-up demand may remain to translate into a future jump in growth.

Will National Beverage quench your thirst for gains?

As a stock, National Beverage has been a success story for several years. It has generally outperformed the S&P 500 over extended periods, though it sometimes dips below the index too. The stock price is up 23.8% so far in 2021, 29.5% over the past 12 months, 101% over five years, and 548% during the past decade. The company has delivered significant growth overall, despite seldom making the headlines other than in a smattering of negative predictions from a handful of analysts.

Underlying market conditions are favorable even though temporary supply and inflation issues exist. National Beverage appears to be successfully navigating the difficulties and profiting from the opportunities. Fools with an interest in beverage stocks may want to add at least a sip of this possibly underrated sector company to their portfolios, given the positive flavor of its results.

Investors Give National Beverage Corp. Thumbs Down After Revenue Miss
356%