The stock market has been rising all year, battling through another wave of the pandemic to carve out a new all-time high in the past month. The next few months may be messier, with labor shortages and supply chain issues causing serious problems for companies big and small.

For long-term investors more concerned about the next few years than the next few months, five of our Motley Fool contributors have honed in on five stocks capable of delivering solid returns. Here's what you need to know about Digital Realty Trust (NYSE:DLR), SSR Mining (NASDAQ:SSRM), Intel (NASDAQ:INTC), Intuitive Surgical (NASDAQ:ISRG), and GXO Logistics (NYSE:GXO). 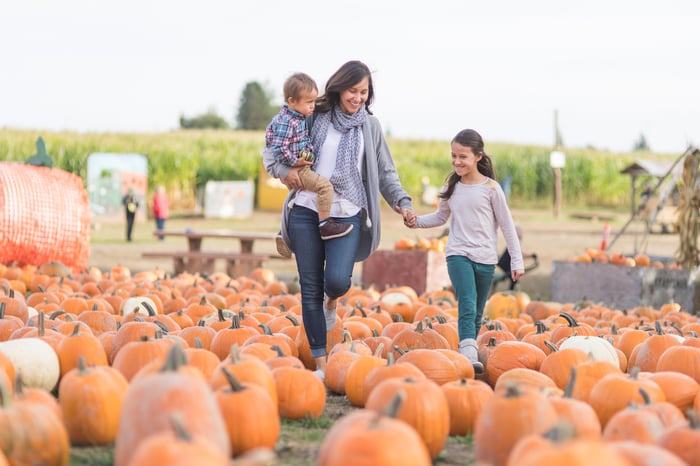 A different kind of tech stock

Matt Frankel, CFP (Digital Realty Trust): Real estate investment trust (REIT) Digital Realty Trust didn't have a great September, with shares falling by more than 10% despite a lack of company-specific news. But I think this could be a great time to add shares of this long-term winner, which has delivered five times the total return of the S&P 500 since its 2004 IPO.

Digital Realty is a data center operator, and if you're not familiar with the appellation, think of data centers as the physical "homes" of the internet. All of the data flowing around the cloud has to live somewhere, and that's where these purpose-built facilities come in.

The need for secure and reliable places to house servers and networking equipment is likely to grow rapidly in the future. For example, the artificial intelligence (AI) market is expected to grow to about six times its current size by 2025, and autonomous vehicles, augmented reality, and other high-data devices are expected to grow at similar rates. And the gradual rollout of 5G technology in the United States and abroad will facilitate increasingly larger volumes of data flowing around the globe.

In the meantime, Digital Realty pays a 3.2% dividend yield, and the company has increased the payout at a 10% annualized rate since its IPO. There are few stocks in the market that offer this combination of income, growth, and reliability.

Add some luster to your portfolio

Sean Williams (SSR Mining): With the market suddenly turbulent, the pandemic ongoing, and higher inflation rearing its head, I think October is the perfect month to consider an industry that's home to a large number of deeply discounted value stocks. That's why gold stock SSR Mining is my clear-cut top buy this month.

The SSR Mining buy thesis boils down to macroeconomic and company-specific factors. On a macro level, the tailwinds for physical gold are about as strong as they've ever been. Historically low bond yields are making sure that safe, inflation-topping income is hard to come by. Meanwhile, rapidly rising inflation threatens to eat away at the purchasing power of the dollar. This all points to investors seeking the safety of physical gold as a store of value. A higher spot price for gold will lift SSR's sales, cash flow, and profitability.

As for the company, SSR Mining completed a merger of equals last year with Turkey's Alacer Gold. This brought SSR's three producing assets under the same umbrella as the low-cost Copler mine in Turkey and effectively doubled output. Production should range between 700,000 gold equivalent ounces (GEO) and 800,000 GEO over the next five years, with the company calling for $450 million in annual free cash flow in 2021 and 2022.

I've been a long-term shareholder of SSR Mining, and what's really stood out for me is the prudent management of the balance sheet. Whereas most gold stocks are chipping away at net-debt positions, SSR is sitting on a net-cash position of over $500 million. This allowed the company to initiate a quarterly dividend (1.4% yield) and a $150 million share buyback program this year.

And there's insane value, too. SSR Mining can be purchased for under nine times Wall Street's earnings consensus for 2021 and 2022, and less than five times projected cash flow per share. In more than a decade of following mining stocks, I've come to the conclusion that a multiple of 10 times cash flow represents fair value. This shows how inexpensive SSR Mining is, relative to its forecasted cash flow.

Making chips for other companies has become a massively profitable business, particularly for TSMC. TSMC controls more than half of the foundry market, and tech giants like Apple, Qualcomm, and NVIDIA depend on it for their products.

Although Intel uses third-party foundries for some of its chips, the U.S.-based chip giant isn't giving up on manufacturing. Intel is instead doubling down on manufacturing. The company is pouring $20 billion into new fabs in Arizona and as much as $95 billion over the decade into fabs in Europe. Intel will also be looking to make acquisitions to accelerate its manufacturing push.

All this spending will support Intel's own products as well as its fledgling foundry business. Intel is aiming to offer an alternative to TSMC, with the added benefit of manufacturing capacity outside of Taiwan. With relations between the U.S. and China tense, so much of the semiconductor industry depending on TSMC seems like a fragile situation.

Intel's manufacturing ambitions will take years to bear fruit, and profits will come under pressure as the company plays catch up. It will look like the wrong strategy until it doesn't. Intel spent years coasting as TSMC gained a manufacturing edge and as Advanced Micro Devices rose from the dead. That era at Intel is over.

A no-brainer healthcare stock to buy

Keith Speights (Intuitive Surgical): I view Intuitive Surgical as a no-brainer healthcare stock to buy in October. There are two attributes that Intuitive possesses that make it such a great pick -- its strong moat and its excellent growth prospects.

Intuitive Surgical pioneered the field of robotic surgical systems more than two decades ago. It now has more than 6,300 systems installed worldwide. Well over 8.5 million procedures have been performed with its robotic technology.

Other companies have entered the market in recent years. None of them, though, can come close to Intuitive Surgical's track record. And rivals will have a difficult time dislodging Intuitive from existing customers after they've invested in implementing the company's robotic systems and training their staff.

I'm most excited about Intuitive Surgical's growth prospects. The company estimates that around 6 million procedures are performed annually for which its current systems could be used without gaining any additional regulatory clearances. That's five times the number of procedures performed with Intuitive's systems last year.

But Intuitive is investing heavily in innovation to expand the types of surgeries where robotic assistance could be helpful. It believes that new products and clearances could expand the addressable market to close to 20 million procedures annually.

Over the short term, Intuitive Surgical's share price could be volatile if COVID-19 causes elective surgeries to be delayed. However, the company is poised to be a big winner over the long term. Intuitive Surgical ranks as one of a handful of stocks that I'll never sell because its prospects are so attractive.

The solution to supply chain stagnation

Jeremy Bowman (GXO Logistics): Companies from Nike to Sherwin-Williams are complaining that their businesses are being impacted by global supply chain challenges, including delays at ports, factory shutdowns because of COVID-19, higher prices, and labor shortages.

GXO Logistics can't solve all of these problems, but it can do a lot to alleviate the supply chain woes that many companies are experiencing around the world. GXO, which split from XPO Logistics in August, is the world's biggest pure-play contract logistics company. The company has nearly 1,000 warehouses, and it helps its customers expedite shipping, process returns, and increase efficiency through automation.

With the boom in e-commerce and the squeeze in the global supply chain, companies are likely to be looking for the kind of solutions that GXO can provide, placing them closer to their customers and offering faster delivery speeds.

GXO has yet to report earnings as a stand-alone company, but the company is targeting 10% revenue growth and 17% adjusted earnings before interest, taxes, depreciation, and amortization (EBITDA) growth in 2022, and that guidance came before the recent port delays and other supply chain challenges, which should favor the company over the long term.

Meanwhile, GXO is also likely to make acquisitions to consolidate its leadership in a highly fragmented industry, following in the footsteps of its former parent company XPO Logistics. The opportunity in front of GXO was already appealing, leading up to the spin-off, and with the world's biggest companies desperate for supply chain solutions, GXO is ready to answer the call.