Toyota is very late to the EV party. Can it catch up?

Toyota (TM 0.30%) plans to spend nearly $14 billion to develop batteries and battery supply chains for electric vehicles (EVs) between now and 2030, in a big bet that new technologies and the company's vast scale can cut battery prices by 30% or more from current levels.

While Toyota is the world's leading seller of gasoline-electric hybrid vehicles, it has lagged rivals including Volkswagen (VWAGY -0.95%) and General Motors (GM 0.63%) in committing to a lineup of fully electric products.

That is finally changing, the company's chief technology officer, Masahiko Maeda, said in a briefing for investors and media last month. But is it too late?

What Toyota said about its battery strategy

Toyota sees cost and performance as key obstacles to widespread consumer adoption of EVs. It will spend 1.5 trillion yen, or about $13.6 billion, to address both over the next several years.

That money will be spent on a few different technologies.

Maeda said that Toyota expects to be able to produce more than 200 gigawatt-hours of batteries annually by 2030 at roughly half the cost of today's lithium-ion batteries.

"We are focusing on safety, long service life, and high-level quality to produce good, low-cost, high-performance batteries," Maeda said. "What Toyota values the most is to develop batteries that its customers can use with peace of mind." 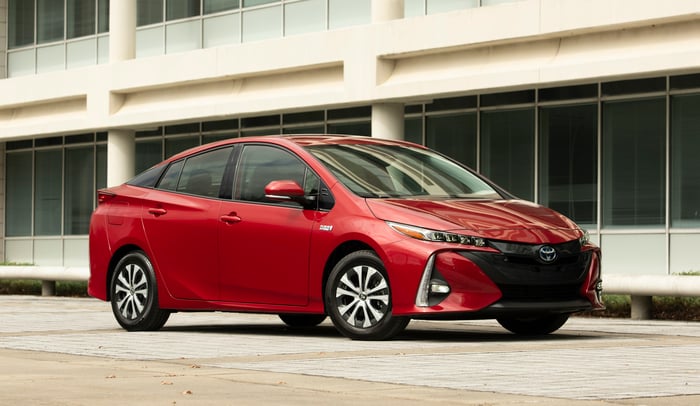 Toyota's hybrids have been the envy of the industry for years. But it has lagged rivals in developing and delivering battery-electric vehicles. Image source: Toyota.

What it means: Toyota is finally embracing this EV thing

For several years now, Toyota executives have maintained that long recharging times and high battery costs would ultimately limit mass adoption of fully electric vehicles, despite the success of Tesla (TSLA -0.34%) and the intense consumer interest in EVs from global automakers like VW and Ford Motor Company (F 0.15%).

That thinking has been visible in the company's research and development spending. Toyota made a substantial bet on hydrogen fuel cells, thinking that the quick "recharging" time -- a fuel cell vehicle can be refueled in about five minutes -- would make the technology more viable than battery-electric drivetrains.

Toyota has also maintained -- and this was reiterated by Maeda -- that gasoline-electric hybrids will continue to have a significant role to play for at least a few more decades. The company argues that hybrids can be a greener option than BEVs in areas where most electricity is generated with fossil fuels.

But these efforts show that Toyota has finally, if perhaps reluctantly, accepted that BEVs are likely to become the dominant technology over the next 10 to 20 years, at least in the developed world. For auto investors wondering about the state of play, I think Toyota -- with its massive global manufacturing footprint and supply chain -- has to be considered a major contender as the world transitions to electric vehicles, even if the company's current product portfolio doesn't yet show it.