Big Blue is suffering from some post-earnings blues.

IBM's (IBM 0.68%) stock tumbled nearly 10% to a seven-month low on Oct. 21 after the tech giant posted a weak third-quarter report. 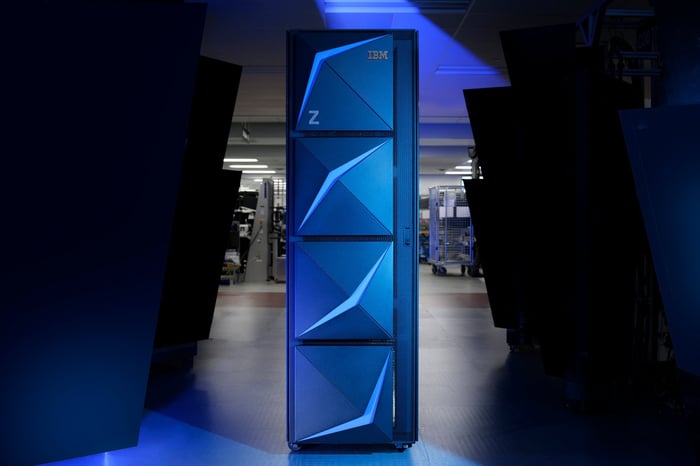 IBM's numbers were unimpressive, but they were in line with the outlook it provided at its investor briefing in early October. Did investors overreact to IBM's messy third-quarter report and create a fresh buying opportunity?

Say goodbye to the "old" IBM

IBM's cloud and cognitive software revenue rose as the double-digit growth of its cloud-related businesses offset the flat growth of its applications business and declining revenue at its transaction processing business.

However, its global technology services unit withered again as the anemic growth of its cloud services failed to offset the ongoing decline of its managed infrastructure services segment, which will be removed by the Kyndryl spin-off.

Its systems division struggled with cyclically lower sales of IBM Z and Power systems, while its financing revenue dipped amid slower demand for its financing services and sluggish sales of its used equipment.

Once again, IBM's strengths couldn't offset its weaknesses -- and investors were left trying to find the bright spots across its opaque reporting segments. However, all of that could change as the "old" IBM fades away.

Say hello to the "new" IBM

After IBM spins off Kyndryl on Nov. 3, it will introduce four new reporting segments: consulting (29% of its revenue from continuing operations in 2020), software (42%), infrastructure (25%), and financing (2%).

IBM believes these four segments will make it easier for investors to track the expansion of its higher-growth businesses. Let's review IBM's long-term expectations for the three main segments from 2022 to 2024:

IBM expects its software segment, which includes Red Hat and other hybrid cloud and AI services, to become its core growth engine.

It also likely expects the streamlined consulting segment to fare better against nimbler IT services and consulting companies like Accenture and Globant.

IBM's infrastructure business, which includes its old systems business as well as other hardware products and services, will likely remain sluggish. However, IBM's profit margin forecast suggests it will focus on streamlining the business and cutting costs to boost its margins.

IBM believes that after spinning off Kyndryl, it will generate "sustainable mid-single-digit revenue growth" from 2022 to 2024.

It expects that growth to be driven by the expansion of its hybrid cloud and AI services, which can be integrated with public cloud platforms like Amazon (AMZN -1.65%) Web Services (AWS) and Microsoft's (MSFT -2.20%) Azure.

IBM likely realizes it's too late to catch up to AWS and Azure in the public cloud market, but it can still leverage its large enterprise customer base and Red Hat's open source software to develop services for the hybrid cloud, which rests between private clouds and public cloud services.

Next month, IBM's investors will receive shares of Kyndryl. If they keep both stocks, they'll initially receive a combined dividend which is equivalent to IBM's current dividend -- but both companies could then cut their payouts.

I believe IBM investors should sell their shares of Kyndryl right away, since it will likely struggle to keep pace with companies like Accenture, but hold on to their shares of the "new" IBM to see if its turnaround plans work.

Is it the right time to buy IBM?

That said, I don't think it's the right time to buy any new shares of IBM. The stock might seem cheap right now at 12 times forward earnings, but it still faces stiff competition from Amazon and Microsoft -- which are both expanding their public clouds into the hybrid market -- and its sluggish infrastructure business could offset the growth of its software and consulting businesses.

Investors should wait for IBM to finish its spin-off and post a few quarters of improving results before believing that a turnaround is actually underway. Until then, they should buy other blue-chip tech stocks instead of Big Blue.