Big Blue has ambitious turnaround plans for the next three years.

IBM's (IBM -0.85%) stock declined about 5% over the past three years as the S&P 500 rallied roughly 50%. Many investors shunned the aging tech giant as it struggled to generate stable revenue growth.

The ongoing declines of IBM's business software, hardware, and IT services divisions offset the growth of its newer cloud-oriented divisions, and investors lost patience with its sluggish turnaround efforts.

IBM tried to support those efforts by acquiring Red Hat for $34 billion in 2019. Red Hat's revenue rose 18% in 2020, but IBM's total revenue still fell 5% as it struggled with pandemic-related disruptions. 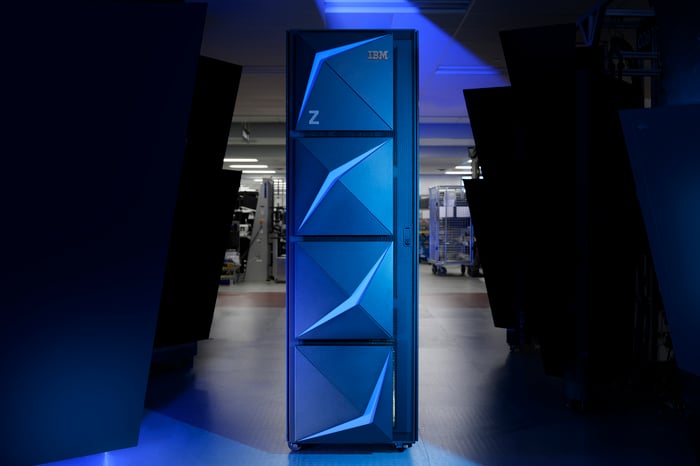 Last April, IBM's cloud chief Arvind Krishna became the company's new CEO, and he set a goal of expanding its presence in the hybrid cloud and artificial intelligence (AI) markets. Six months later, IBM announced it would spin off the managed infrastructure services unit of its Global Technology Services division.

When that spin-off closes later this year, the "new" IBM will continue to expand its hybrid cloud and AI businesses as the new spin-off, Kyndryl, takes over one of its slowest-growing businesses.

IBM's spin-off plan didn't thrill many investors, but the company recently held an investor briefing to clarify those plans and outline its financial goals. Let's review the key takeaways from that presentation and see how they might affect IBM's stock price over the next three years.

IBM believes it can generate "sustainable mid-single-digit revenue growth," or roughly $3 billion in fresh revenues each year, from 2022 to 2024. It expects the growth of its hybrid cloud, consulting, and security businesses to offset the slower growth of its remaining infrastructure-oriented businesses.

After spinning off Kyndryl, IBM expects to generate more revenues from its higher-growth software and consulting divisions. Those higher-growth segments generated 55% of its revenues in 2020, but that percentage will climb to about 70% after the spin-off. The software businesses IBM is keeping generated 45% of its recurring revenues in 2020, but that percentage will rise to 65% after the spin-off.

After the spin-off, IBM will reduce its reporting segments from five to four: Consulting (29% of its revenue from continuing operations in 2020), software (42%), infrastructure (25%), and financing (2%).

The consulting business will provide business transformation, technology consulting, and application operations services. It expects the segment to generate high single-digit sales growth between 2022 and 2024 with a pre-tax profit margin in the low teens.

The software business will include Red Hat and IBM's hybrid cloud, AI, security, and transaction processing divisions. It expects Red Hat's sales to rise by the high teens, and for the entire software segment to generate mid-single-digit sales growth with a pre-tax profit margin of nearly 30%.

IBM expects those improvements to boost its free cash flow (FCF) by the high single digits each year between 2022 and 2024. That estimate translates to roughly $750 million in FCF growth every year with a cumulative FCF of $35 billion over the next three years. IBM plans to return some of that cash to shareholders and spend the rest on fresh investments.

Investors should expect IBM to spend more of its cash on investments and acquisitions, especially to strengthen its software and consulting businesses, instead of repurchasing its shares or boosting its dividend. IBM and Kyndryl will initially pay a combined dividend equivalent to IBM's current dividend, but both companies could reduce their payouts after going their separate ways.

Where will IBM's stock be in three years?

IBM's plans sound promising, but it still faces stiff competition in the software and consulting markets. Amazon (AMZN -3.31%) and Microsoft (MSFT -1.89%) are expanding their public cloud platforms into the hybrid cloud market with "virtual private clouds," while faster-growing IT companies like Accenture (ACN -2.46%) and Globant (GLOB -5.88%) are carving up the consulting market.

But if IBM hits its growth targets, its stock could rise again. The stock looks dirt cheap right now at 12 times forward earnings, and it could become more appealing after it spins off Kyndryl. If you own IBM, you should hold your shares and see if its three-year turnaround plans pay off. But if you don't already own the stock, you should wait for the spin-off to close before taking a fresh look at the "new" IBM.