Bitcoin is crushing the market. These stocks could bring you bigger wins.

Cathie Wood's ARK Invest firm has a reputation for scoring big wins with explosive growth plays -- and it's no secret the famous investor is bullish on Bitcoin (BTC -0.21%). The market-leading cryptocurrency is now worth roughly $66,000 per token -- up roughly 115% in 2021 -- and Wood has suggested that the price could hit $500,000 over the next five years.

For those seeking stocks with similar market-crushing potential, ARK Invest also has big holdings in some very promising growth stocks that could level up your portfolio. Read on to see why a panel of Motley Fool contributors thinks these three Cathie Wood stocks can outperform Bitcoin.

Bitcoin is big, but interactive content could be bigger

Keith Noonan: Unity Software (U -1.61%) stands as the fourth-largest overall holding in Cathie Wood's Ark Innovation ETF, and I think the interactive-software development company stands a good chance of crushing the market over the long term. The company is best known for its video game development engine services, but Unity's growth opportunities expand far beyond gaming.

You might have heard that Facebook has recently changed its name to Meta Platforms -- a shift that reflects the social networking giant's ambitions to capitalize on the long-term growth of the "metaverse." Some of technology's biggest players are betting that virtual worlds will play a growing role in socialization, commerce, and everyday life, and Unity could be a key player in making this vision a reality.

The business's momentum is already very encouraging. Unity managed to grow its sales 48% year over year in the second quarter. Existing customers increased their spending 42% compared to the prior-year period, and the software company continued to bring new, high-value clients aboard its platform. In the second quarter, 888 customers each generated more than $100,000 in revenue -- up from 716 in the prior-year period. The growth story here is likely just getting started, and I expect the company to deliver more strong results through the rest of the fiscal year.

The software specialist is providing a foundational framework and tools that allow its customers to build highly engaging interactive experiences, and the long-term demand outlook for these services is very promising. Bitcoin could very well go on to deliver more huge gains, but I think Unity stock can beat it over the next five years.

Coinbase could lead the next leg of crypto acceptance

Jamal Carnette: Shares of Coinbase Global (COIN 0.49%) sold off last month upon news Cathie Wood sold nearly 100 thousand shares of the crypto-focused brokerage. However, Wood isn't losing faith. In fact, Coinbase is currently the third-largest holding in Wood's flagship ARK Innovation ETF and is more than 6% of the ETF's total holdings. Simply put, Wood is still bullish on the stock.

Crypto has been on fire for the last decade but many investors are overlooking the next growth driver. To date, investors have focused on bitcoin and other coins as store-of-value investments like gold. However, many investors are looking at increased adoption -- particularly as a means of exchange -- as the next evolution in crypto.

Forward-thinking companies like Square and PayPal Holdings are already on board but more institutional buy-in will be needed. However, this is a chicken-and-egg problem: Companies need to see crypto adoption increase before they invest time, money, and effort in their operations, but more investment is needed for adoption to increase. Against that backdrop, Coinbase is undervalued due to its existing relationships.

It's easy to view Coinbase as a "YOLO-trader" brokerage catering to day traders on the internet but that's clearly a misperception. In the second quarter Coinbase reported having more than 9,000 institutional buyers and this group traded $317 billion in transactions on its platform, which was nearly 70% of total trading volume. The optionality these existing relationships have for increased services to foster adoption is an undervalued part of Coinbase's investment thesis.

The company is leading efforts to expand the cryptocurrency ecosystem. Coinbase recently acquired the infrastructure-as-a-service platform Bison Trails (renamed Coinbase Cloud) that allows institutions to quickly integrate blockchain infrastructure into their operations. Additionally, the company formed the Crypto Council for Innovation along with Square and Fidelity to shape regulatory efforts in the space.

In the short run Coinbase will likely rise and fall with crypto prices but the company has a rare opportunity to lead crypto adoption in the long run. That's why Cathie Wood is so bullish on the stock.

Zillow's shift could make it a massive winner

Jason Hall: The past week has been brutal for shareholders of online-housing-finder platform Zillow Group (ZG 3.23%) (Z 3.50%). The company stunned investors when it reported third-quarter results, announcing plans to wind down Zillow Offers, its iBuying business, which had been expected to be a cornerstone of the company's growth going forward. As a result, Zillow has lost more than one-third of its market value in barely a week, and shares are down a brutal two-thirds from the all-time high reached earlier this year: 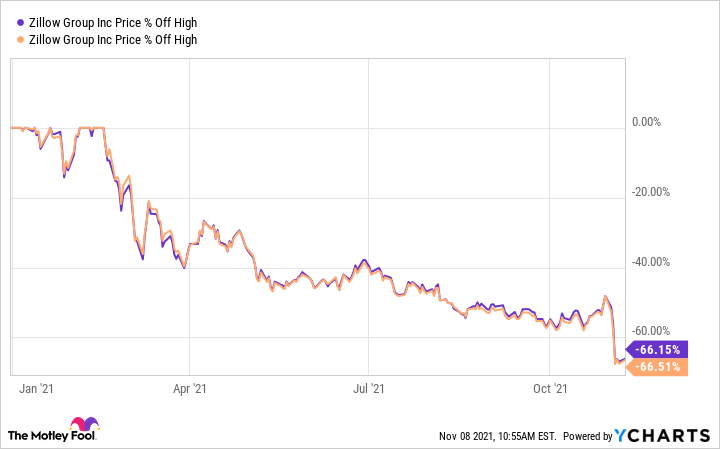 Why should investors even consider Zillow right now? After all, Zillow Offers is a huge failure for the company, and will end up costing hundreds of millions of dollars to exit on top of massive losses over the past three-plus years to build it up. It certainly smacks of a management team that failed to execute, in what is expected to be a very lucrative part of the housing market for years to come: iBuying.

I do think iBuying will be a big business. And I do think there will be more than one winning company in that segment. But I also think Zillow's CEO, Rich Barton, made a painful decision that Zillow doesn't hold any competitive advantages in this low-margin, high-risk business, and the cost of Zillow Offers was pulling resources away from other -- very profitable -- segments.

Zillow's real competitive advantage is the network effect of its popular platform, and it no longer competes with the agents who are its most important customers. There's still major execution risk, and future growth will be much slower sans iBuying. But Zillow's core business is very profitable, and lower-risk than it was a week ago.