Jeremy Bowman, Anders Bylund, Keith Speights, Timothy Green, and Brian Feroldi
(TMFHobo)
Author Bio
Fool since 2011. I write about consumer goods, the big picture, and whatever else piques my interest. Follow me on Twitter to see my latest articles, and for commentary on hot topics in retail and the broad market. Follow @tmfbowman

Earnings season is in the rearview mirror, and the holiday season is afoot. Warnings of a new Covid variant are rocking markets again, as are threats of a tightening monetary policy. The stock market may be uncertain, but there are still plenty of opportunities for savvy investors. 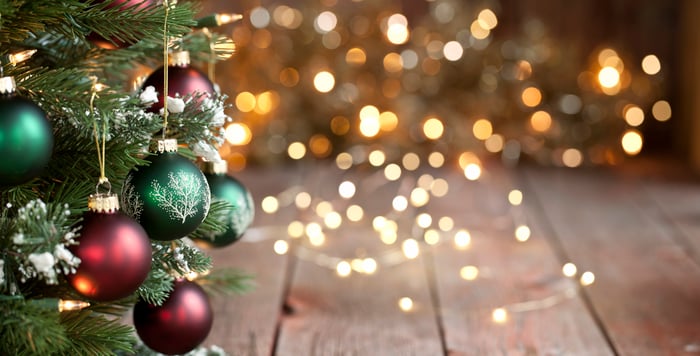 Keith Speights (Teladoc Health): There's a good chance that the omicron variant will be the most important factor affecting the stock market in December. If that's the case, Teladoc Health is likely to be one of the biggest winners over the short term.

Teladoc's shares skyrocketed last year as the COVID-19 pandemic fueled a massive acceleration in the use of telehealth. I don't think that the widespread lockdowns of 2020 will return. However, as long as there is uncertainty about the omicron variant, Teladoc is likely to benefit.

But I don't view Teladoc as merely a short-term play. Over the long term, I think that the company will be an exciting disruptor of healthcare. Actually, it already is.

More than half of the Fortune 500 have signed up with Teladoc. They've turned to the company's virtual care services because of lower costs and greater convenience for patients. Those advantages won't disappear once the pandemic is over.

Teladoc's acquisition of Livongo Health puts the company in the driver's seat in digital chronic disease management. Its new Primary 360 product should make Teladoc an even more formidable competitor in virtual care. Primary360 allows individuals to select a primary care provider that they see virtually, and with whom they can develop an ongoing relationship.

The adoption of virtual care is still only in its early stages. I think that Teladoc could easily deliver a 5X return or more over the next decade.

Anders Bylund (Duolingo): Language-learning service operator Duolingo (NASDAQ:DUOL) has hardly missed a step in the last three months. The company added a couple of high-powered names to its executive suite and delivered year-end guidance far above Wall Street's expectations. Sure enough, the stock rose from $120 per share in late August to $202 in the second half of September.

...and then Duolingo fell into Wall Street's bargain bin. The stock is now back where it was three months ago, and I think the buying window is wide open.

The business is firing on every available cylinder. Subscription revenues rose by 42% year over year in the third quarter. Advertising sales also jumped 34% higher. The company's "other" revenues, mainly related to in-app purchases, scored a 179% sales boost. And the future looks even brighter. Bookings increased by 57%, indicating a growing trend in subscription-based sales.

That's not all. Duolingo has much bigger plans for its education and tutoring services, far beyond its current niche in teaching foreign languages. The company's mission is to "develop the best education in the world and make it universally available." You should expect the company to start making those moves soon.

"We made strong progress on our mission this past quarter, and we have exciting plans for the future," said co-founder and CEO Luis von Ahn in the third-quarter earnings call. "I plan to devote my life to this mission."

Furthermore, Duolingo now has an official head of animation and scripted content. Linda Simensky, former content development chief at PBS Kids, is already sketching out animated shows featuring Duolingo's cast of characters. I expect a serious marketing push to go along with her content development efforts.

And you can buy into this ambitious plan of world domination at a 42% discount from September's highs. I think we'll eventually look back at Duolingo's $4.6 billion market cap in the fall of 2021 and call it quaintly small. This stock has a lot of growing left to do, and it trades at a reasonable price right now.

Tim Green (AT&T): Telecom giant AT&T has spent the past six years making costly mistakes. In an ill-fated attempt to transform itself into an entertainment conglomerate, AT&T racked up debt by pouring tens of billions of dollars into questionable acquisitions.

AT&T spent $67 billion, including assumed debt, on DirecTV in 2015. After years of shedding subscribers, the company offloaded DirecTV at a fraction of what it paid in a private equity deal earlier this year. The $109 billion acquisition of Time Warner, which closed in 2018 after a long battle with regulators, is set to come to a similar end. Time Warner, now called WarnerMedia, will be merged with Discovery (NASDAQ:DISCA) by mid-2022.

AT&T and its shareholders would have been better off if the company hadn't embarked on its failed foray into the media business. But if you're investing in AT&T today, you're not buying those past mistakes. You're buying a cash-cow telecom business that will soon be free from distractions, along with a piece of a new content company that should be a major player in the streaming market.

AT&T expects to generate around $20 billion of free cash flow annually once the deal closes. The company is currently valued around $170 billion, a pessimistic valuation to say the least. The new content company expects to produce around $8 billion in annual free cash flow starting in 2023.

These estimates could certainly be overly optimistic. The latter assumes $3 billion in cost synergies, which should always be taken with a grain of salt. But even if they are off base, AT&T's stock has been beaten down so much that the downside looks limited. With AT&T, you get a telecom giant gushing cash and, next year, a portion of a streaming giant with a vast catalog of content. It looks like a pretty good bet to me.

Another way to play the holiday season

Jeremy Bowman (MercadoLibre): December marks the busiest time of year for retailers and other consumer-facing businesses, and that phenomenon extends beyond the U.S. into Latin America and elsewhere.

That's one reason to consider MercadoLibre, a Latin American e-commerce and digital payments giant, which is benefiting from a number of tailwinds, including the boom in its core businesses sparked by the coronavirus pandemic. The fourth quarter is typically the company's strongest of the year, yet the stock is trading at a 52-week-lows for no good reason other than the broader sell-off in growth stocks amid fears of tightening monetary policy and rising interest rates, which make growth stocks less attractive.

However, MercadoLibre's third quarter shows why the stock is so attractive, especially at its current valuation. Gross merchandise volume (GMV) increased 30% year over year on a currency-neutral basis to $7.3 billion, while currency-neutral revenue jumped 73% to $1.9 billion. At the same time, earnings per share jumped from $0.28 to $1.92 year over year, showing that the business is rapidly gaining scale.

MercadoLibre looks particularly appealing at the current price because the company is becoming much more than an e-commerce business. In addition to Mercado Pago, its digital payments product, it also had fast-growing businesses in logistics with Mercado Envios, financing with Mercado Credito, and an asset management arm, Mercado Fondo. Altogether, it shows a company building an impressive network of businesses that reinforce each other and build the company's competitive advantages.

MercadoLibre has been a longtime winner on the stock market, and taking advantage of this dip should reward investors once again.

Brian Feroldi (Zoom Video Communications): Companies that benefited from stay-at-home orders soared in 2020. No company illustrates that point better than Zoom Video Communications (NASDAQ:ZM). Shares of the leading video communication platform skyrocketed more than 395% during the year. However, investors have been fleeing from stocks that benefited from COVID throughout 2021. That mass sell-off has crushed Zoom's stock and put its shares in the bargain bin. I think that's providing investors with an opportune time to get in.

Zoom's recent quarterly results show that its high-growth days are far from over. Zoom's revenue grew 35% year over year in the third quarter to $1.05 billion. Better yet, its margins expanded across the board. That allowed its adjusted earnings per share to jump 68% to $1.11. Clearly, the reopening of the world hasn't been bad for businesses.

If that wasn't impressive enough, Zoom also raised its full-year guidance. Management now expects revenue to land between $4.079 billion to $4.081 billion (up from $4.005 billion to $4.015 billion). This represents more than 50% growth from 2020. What's more, Wall Street expects Zoom's revenue to grow another 16% in 2022. These numbers tell me that the bull case for owning Zoom's stock is hardly firmly intact.

There's no doubt in my mind that Zoom's growth will continue to slow in the coming years, but I also firmly believe that flex work is here to stay. That means that the long-term demand for high-quality video software will remain strong for years. As a leader in the field, Zoom looks poised to benefit from that mega-trend.

Meanwhile, Zoom's stock has fallen so much that its valuation is finally looking reasonable. Shares are trading for less than 45 times next year's adjusted earnings estimates, and under 18 times sales. While these numbers might not look classically "cheap", I think they are a bargain price to pay for a high-quality business.