The health care sector in general, and biotech industry in particular, have now shrugged off their earlier first quarter dip. For instance, the iShares Nasdaq Biotech Index (NASDAQ:IBB) has rallied a little over 13% year to date, although this closely watched index remains below its earlier highs this year.

What's key to understand is that this turnaround was ignited by a bevy of strong first quarter earnings reports from top names in the sector. Given the importance of fundamentals to this broad-based rally in the health care sector, let's take a look at what to expect from Abbott Laboratories (NYSE:ABT) and Johnson & Johnson's (NYSE:JNJ) second quarter earnings reports this week. 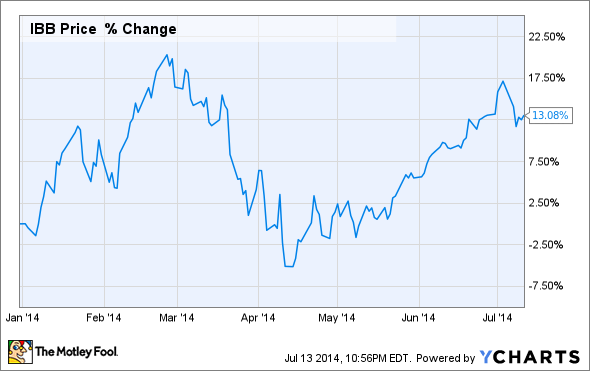 Abbott will report Wednesday before the bell
Abbott plans to hold a conference call at 8 a.m. EST on July 16 to discuss its second quarter earnings. Wall Street is expecting earnings per share to come in at $0.51 on $5.52 billion in revenue.

The key issues to pay attention to are growth in emerging markets across business segments and volatility in currency exchange that could have a major influence on profitability. Its Established Pharmaceuticals business was particularly affected by currency fluctuations in the first quarter, leading to a 5.9% drop in revenue.

Turning to specific issues to keep an eye on, investors should watch for continued growth in Abbott's molecular diagnostic tests for core infectious diseases, which management pegged as an area with significant expansion opportunities last quarter. Abbott's vascular business should also play an important role this quarter, following the launch of a diversity of new products including Supera and MitraClip and the rapid growth of this business in key emerging markets like India.

Abbott should also benefit this quarter from the resolution of the disruption in its international nutrition business and supply issues for some Established Pharmaceuticals products that negatively affected sales in the prior quarter.

Johnson & Johnson will report Tuesday before the bell
Johnson & Johnson will host a conference call at 8:30 a.m. EST on July 15 to provide details on its second quarter. Although the consensus on the Street stands at $1.55 for earnings per share on $18.94 billion in revenue, we've already heard a number of analysts state they they expect the pharma giant to beat these numbers, based mainly on the strong sales in its pharmaceutical segment.

In terms of pharma sales, the Street will definitely take a keen interest in the sales of J&J's new hepatitis C drug Olysio--after its launch blew away initial expectations in the first-quarter and caught most analysts flat-footed. Given that Sovaldi's prescriptions look like they grew at a nice clip this quarter and the bulk of Olysio's sales came as co-prescriptions with Sovaldi, I think the general optimism for strong quarter over quarter growth for Olysio is justified.

Next up, the Street will be scrutinizing sales of J&J's red-hot prostate cancer drug, Zytiga. Although Zytiga has been one of the company's fastest growing pharma products lately, Medivation (NASDAQ: MDVN) and Astellas Pharma's Xtandi has captured market share at breakneck pace as well. Zytiga's sales might pull back this quarter, as competition becomes a bigger factor.

Foolish wrap-up
These two top health care names help to kick off earnings season this week, with both likely to top consensus -- or at least meet estimates. That being said, Abbott and J&J could report negative surprises in their earnings this week. Abbott's internationally oriented business exposes it in a major way to volatility in currency exchange and J&J's flagship prostate cancer drug Zytiga should start to feel the effects of competition in the near future. In sum, these are pivotal issues to be on the lookout for this quarter that could have far-reaching impacts across the health care sector.