The biotech industry has ballooned in terms of market value over the past two years. As a result, we have seen dozens of IPOs, creating a diverse population of companies that can be quite a challenge to follow in their entirety.

So it's not surprising that in this environment companies with promising new drugs go underappreciated by the broader investing community. Medivation (NASDAQ: MDVN) is perhaps the poster child for this problem.

Despite launching its highly successful prostate cancer drug, Xtandi, with partner Astellas Pharma in both the U.S. and the EU and rapidly gaining market share against Johnson & Johnson's (NYSE:JNJ) market leading drug Zytiga, retail investors don't appear to fully appreciate the impressive growth prospects of this mid-cap biopharma. With that in mind, let's take a look at three reasons why you should have this stock on your watch list. 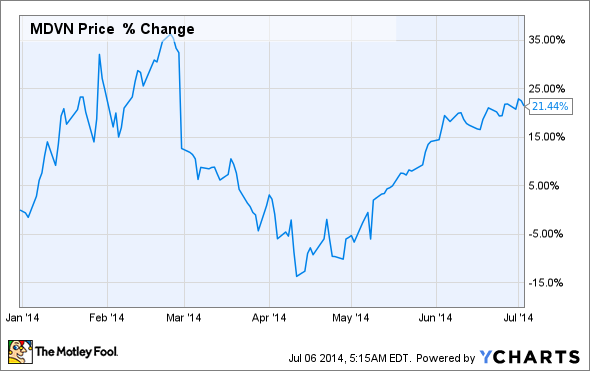 Reason No. 1
A stock's ownership profile should always be on the top of your list to check list prior to owning a stock. Typically, you want to see a high level of institutional owners and few short-sellers. Fortunately, this is exactly the case for Medivation. Per the latest numbers, Medivation sported a 96% institutional ownership and a paltry short ratio of 4.2. Simply put, Wall Street clearly believes that Medivation still has more upside potential, despite its 21.4% rise year to date.

Reason No. 2
And perhaps the reason why Wall Street believes in Medivation's upside potential is because its earnings forecast looks particularly strong going forward. In the first quarter, Medivation increased annual guidance for U.S. net sales of Xtandi to between $540 million and $575 million, compared to $500 million and $535 million previously.

According to management, this rosier guidance is being driven by Xtandi's superior efficacy data in terms of overall survival and ease of use compared to Zytiga. Consequently, the company has seen Xtandi steal market share away from Zytiga faster than they previously projected.

To put this into context, Zytiga is on track to break $2 billion in sales this year as a treatment for metastatic castration-resistant prostate cancer. If Xtandi continues to seize share from Zytiga, then there's lots of potential upside in sales.

Reason No. 3
Medivation is not resting on its laurels, however. The company has submitted an sNDA to the FDA to expand Xtandi's label to include prechemotherapy patients. The Prescription Drug Fee User Act target action date for this application is presently set for Sept. 18. If Xtandi gains approval for this additional indication, it could help to boost peak sales in the prostate cancer arena significantly.

Looking ahead, Xtandi is also showing promise as a potential treatment for breast cancer, a market that saw approximately $13.5 billion in sales last year. In short, Xtandi could become an important treatment in two big markets, opening up lots of exciting opportunities for Medivation.

Foolish wrap-up
Although Medivation doesn't grab the headlines as often as its fellow prostate cancer drugmakers Dendreon (NASDAQ: DNDN) and J&J, I think it's ultimately going to be the market share leader for this indication. And Xtandi's expanding market share could have major impacts on its competitors. For instance, Dendreon's Provenge looks to be in an unenviable position as it struggles mightily to compete in this highly competitive market space and J&J's Zytiga may not produce the same level of top-line growth that many were expecting from the drug. These potential ancillary effects are certainly worth keeping tabs on by investors in these other prostate cancer drugmakers.

Turning to an investing thesis, Medivation offers stellar top-line growth and an improving bottom line, fueled by Xtandi's strong commercial performance. On a more speculative note, I have a hard time believing that Medivation isn't on some big pharma's wish list, given the events of recent weeks in terms of M&A activity.

With a market cap of less than $6 billion and a drug quickly approaching blockbuster status, Medivation looks like a huge bargain compared to some of the other deals being floated in the sector right now. In short, Medivation is both a fundamentally sound company and a compelling, albeit speculative, takeover target -- making it a stock worth digging into deeper.