Specialty home-improvement retailer Tile Shop Holdings (NASDAQ:TTSH) reported financial results for the second quarter on July 21, and for the most part, the results were pretty solid. The highlights:

Even after turning in a relatively solid quarter, the stock is down so far today. As of this writing, it's down more than 10%, on (as best as I can figure) concerns over the big drop in gross margin percent and the slight reduction in store openings planned for the full year.

Is Mr. Market giving investors an opportunity to buy today? Let's take a closer look at the details.

What's up with margins?
This is likely at least part of what has the market selling today. A big part of the draw for investing in Tile Shop has been its margins, but since peaking around 73% in 2012, they have continued to fall: 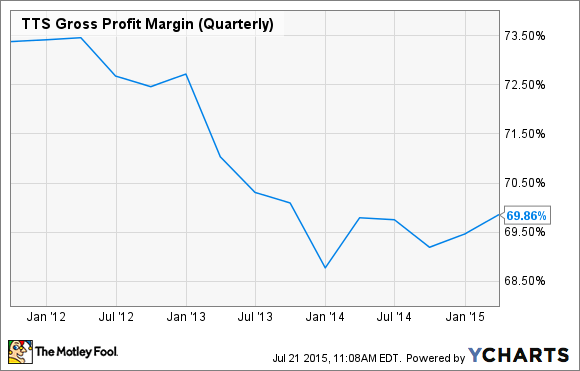 The chart above doesn't include the results from this quarter, which at 67.8% is the lowest the company has reported since going public, and reverses what had been a trend of positive gains.

CEO Chris Homeister addressed this drop very early in his earnings call comments, stating that it was the result of some product pricing testing in isolated markets, and that margins would rebound next quarter. Only time will tell if this happens as promised, but the impact of this testing has reduced gross margins one full percent from the first half of 2014.

Opening fewer stores than planned; investing that cash in existing stores
In a bit of a surprise, Tile Shop reported that it would only open seven to eight new stores in 2015, a reduction from the eight to 10 that the company had been planning before. This is a big reduction from prior years -- the company opened 19 new stores just last year -- and is probably also playing a role in today's sell-off. At only 110 stores, why is the company slowing expansion?

Homeister also addressed this, stating that the reduction wasn't a change of plans so much as the product of not finding locations in several targeted markets that met the company's criteria. The company still plans to use the capital allocated for store openings, and instead will invest in remodeling existing stores. Homeister went on to say that the goal going forward will be for annual store growth in the 8% to 12% range.

Key initiatives driving comps growth, improving employee retention
Same-store sales growth came in above 5%, as detailed above, and the company highlighted its efforts to improve sales with home-improvement pros and homebuilders as part of the reason why, stating that just as last quarter, sales to professionals grew at a higher rate than overall sales growth.

The company also stated that its market manager initiative is positively affecting employee retention and the results at the store level. Turnover fell again in the quarter, and store manager average tenure also increased to the highest levels since 2012.

Debt and capital management
Free cash flow came in at around $8 million in the quarter, putting the total so far this year at $30 million. This has allowed the company to significantly reduce its debt. Total long-term debt is $63.8 million, down more than $6 million since March, and almost $25 million lower than in December.

The SG&A expense rate, which measures the percentage of sales that goes to selling, general, and administrative expenses, fell from 59.1% in the year-ago quarter to 56.6% (that's good), while the adjusted EBITDA margin rate -- which measures cash margins before taxes and interest -- increased from the year-ago quarter, but so far this year is slightly down from 2014.

Putting it all together
Overall, it looks like this was a solid quarter, with the market concerned because of falling margins and a reduction in the store opening count. Whether we can take Homeister at face value on both fronts is a key. If he's right, margins will bounce back, and the investments in existing stores will help grow comps, though it won't make up the difference of fewer new stores being opened this year than expected.

But moving beyond those subjective things, it's hard to argue that the improved comps and a record-setting sales quarter aren't good signs. Furthermore, Homeister's focus on reducing debt and building up a stronger cash position and emphasis on employee retention and growth in sales to potential repeat professional customers are also indicative of a business that's improving -- or at the very least a management team that's taking steps to strengthen the business.