Shares of the fast-casual chicken chain took a beating last month. Here's what you need to know:

What: Shares of El Pollo Loco (LOCO 0.57%) fell 31% in August, according to data from S&P Capital IQ. The fast-casual chicken chain got fried following a disappointing earnings report and a subsequent investor backlash. The chart below tells the tale. 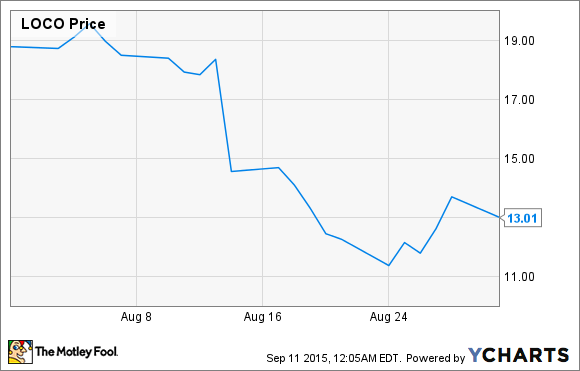 So what: Shares of El Pollo Loco spilled 20% on Aug. 14 after a second-quarter earnings report that dialed down its full-year forecast in several categories. Management said it expected same-store sales growth to come in at just 3% -- at the low end of its previously announced range of 3%-5% -- and said it would only open 24 restaurants this year, three fewer than the market had expected.

Surprisingly, the company's quarterly profit actually beat expectations by a penny, with earnings per share of $0.19, but investors were more concerned about future growth. Same-store sales for the quarter were also weak at just 1.3%, while overall revenue only increased by 3%. For a recent IPO and a once-promising growth stock, those numbers simply are not enough.

Now what: Following the path of other fast-casual IPOs like Potbelly and Noodles & Company, El Pollo Loco boomed following its market debut but shares have since fizzled as the company's growth has not lived up to expectations. Shares are now down 70% from their 52-week high and fell further after the earnings report as several lawsuits were filed against the company on behalf of investors in the aftermath of the scaled-back forecast.

The silver lining for investors is that shares are modestly priced at this point, trading at a P/E of less than 20, and there are reasons to believe in the concept's potential. El Pollo Loco delivers a solid restaurant-level operating margin of over 21%, and the Mexican-style fire-grilled chicken concept seems relatively untapped nationwide. The company has already opened more than 400 locations in just a handful of states in the Southwest, meaning similar success across the country could lead to a total store count around 2,000. Still, I'd need to see El Pollo Loco execute better on its existing stores' sales growth before buying in on that level of expansion.