Please ensure Javascript is enabled for purposes of website accessibility
Log In Help Join The Motley Fool
Free Article Join Over 1 Million Premium Members And Get More In-Depth Stock Guidance and Research
By Jeremy Bowman - Sep 11, 2015 at 8:57AM

Shares of the sandwich chain had another slide last month as an earnings report and an overall market tumble fueled investor pessimism.

What: Shares of Potbelly Corporation (PBPB 2.91%) tumbled 22% last month, according to data from S&P Capital IQ. As you can see from the chart below, the stock fell sharply following a disappointing earnings report at the beginning of the month, and then continued to slide with the broader market toward the end of August. 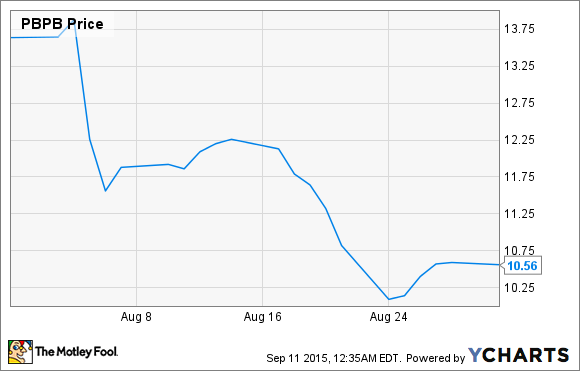 So what: Ostensibly, the fast-casual chain delivered solid results in its second-quarter report, posting comparable sales growth of 4.9% and overall revenue growth of 14.7%. However, earnings per share of $0.10 fell short of estimates by a penny, and its revenue total slightly missed the estimate of $96 million. One key concern for investors seems to be rising food costs, as the company had trouble putting up substantial profits despite steady sales growth. For the first six months of the year, overall operating margin has improved from 1.9% a year ago to 2.8%, but investors should hope to see a wider margin from a company considered to be a growth stock.

Now what: At this point, Potbelly seems like it isn't growing fast enough to live up to the expectations of the market. Shares have fallen all the way from $32 in its post-IPO days to just $11, and the stock could fall further still as the winter months tend to be weaker -- and its P/E is still near 40.

As an incentive to investors, the sandwich shop announced a $35 million share repurchase program, but for a company only tracking for a $6 million profit this year that seems like an unreasonable gesture. Even if Potbelly is able to deliver substantial profits, it would be better for the company to reinvest those back into new stores rather than simply buy back shares. One bloated line item on the income statement appears to be general and administrative costs, which account for more than 10% of revenue. The company could bring that in line with its peers by cutting two or three percentage points off of the total, which would double profit. A move like that could easily push the stock sharply higher.