Please ensure Javascript is enabled for purposes of website accessibility
Log In Help Join The Motley Fool
Free Article Join Over 1 Million Premium Members And Get More In-Depth Stock Guidance and Research
By Jason Hall - May 8, 2019 at 2:30PM

Management blamed everything from the weather to the federal government shutdown for its bad first quarter.

Today's huge sell-off is a response to the company's first-quarter earnings report, which it released after hours yesterday. In short, the company posted $98.1 million in revenue, a 5% decline, an $18 million GAAP loss, and a $3 million loss even after adjusting for nonrecurring items. 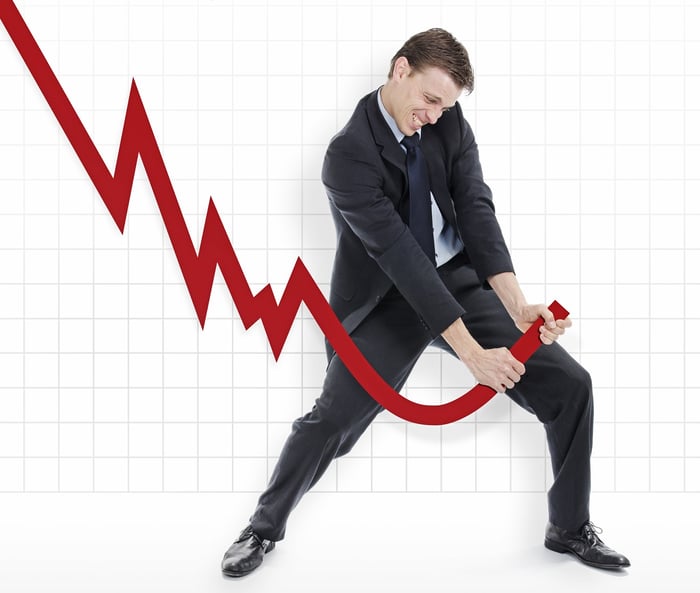 Getting into the particulars, Potbelly's sales decline was particularly troubling, since its comparable sales, which measures sales at restaurants open for more than one year, fell 4.7% in the quarter. Total sales were well below expectations; analysts were looking for $101 million on average, while the market expected a loss, albeit a much smaller loss of $0.03 per share versus the $0.12 adjusted loss per share the company actually reported.

In the earnings release, CEO Alan Johnson passed the blame around for the weak quarter, saying, "Our company-operated same store sales were negatively impacted by the government shutdown and the unseasonably cold temperatures across our key markets during the first half of the first quarter."

In fairness, investors may want to give Johnson and Potbelly the benefit of the doubt in Q1. The company operates a significant number of its restaurants in the D.C. metro area and the northeast, so those two things likely did have an outsize impact on the early part of the year.

But there's a difference between giving them the benefit of the doubt and investing in the company's turnaround. Just because Potbelly shares will likely close at an all-time low today doesn't mean they'll just start going up from here.

That's particularly true considering that the company has a lot of work still ahead of it in its turnaround. Over the next year, the company is saying it will close more locations than it will open, and those expenses -- not to mention the continued drag from still open but unprofitable restaurants -- will weigh on the bottom line.

Potbelly's food is delicious, and I expect eventually there could be a good opportunity to invest in this company. But until management stabilizes the numbers and shows the concept can generate positive results, investors should probably stay on the sidelines.