What: Restaurant chain Noodles & Company (NDLS 5.62%) saw its stock sink 23% during the month of August, according to S&P Capital IQ data. With that drop, shares are now 50% below where they started the year -- and down a brutal 65% since the fast-casual eatery's 2013 IPO. 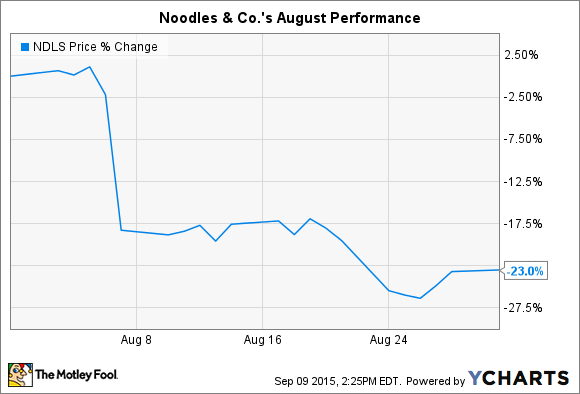 So what: The stock sold off after second-quarter results, released on Aug. 6, rattled investors. Noodles posted lower quarterly profits in that announcement: $0.10 per share, down from $0.12 per share a year ago. And the chain's 16% sales growth was also below Wall Street's expectations.

But worse than that miss was the fact that all of Noodles' sales gains came from new restaurants added to the store base rather than increased customer traffic at existing locations. Comparable-store sales improved by only 0.1%, which was a slowdown from the already weak 0.8% gain Noodles booked in the first quarter.

Meanwhile, without additional diners to serve, profitability took a big hit. Operating margin fell to 18.6% of sales from 20.4% a year ago.

Now what: Management has a plan to lay the groundwork for stronger, more profitable growth ahead. The strategy involves upgrading to higher-quality ingredients and cooking methods while communicating what makes the chain special with a major marketing push through the end of the year. Noodles & Co.'s advertising strategy should "significantly elevate our brand awareness and help us meet today's guest expectations," CEO Kevin Reddy said in a press release.

But standing out in the crowded fast-casual space will be a big challenge for this struggling noodle and pasta dish chain. And if a rebound is in the cards, it likely won't happen until next year at the earliest. Management last month lowered their comps growth and profit forecast for 2015. As the business stands now, Noodles & Co. isn't connecting with diners or giving them enough reasons to become more frequent customers. So, while shares are cheap compared to just a few months ago, prospective investors might want to wait until Noodles shows steady traffic gains before buying into this stock.

Why Noodles & Company Stock Rocketed 23% at the Open Today