Scratch one potential customer from Beyond Meat's menu.

Hard on the heels of yesterday's announcement that Impossible Foods is cutting the wholesale price of its plant-based meat products, today brought more potentially bad news for plant-based foods phenomenon Beyond Meat (BYND -2.46%): El Pollo Loco (LOCO 2.54%) is making its own plant-based "chicken." 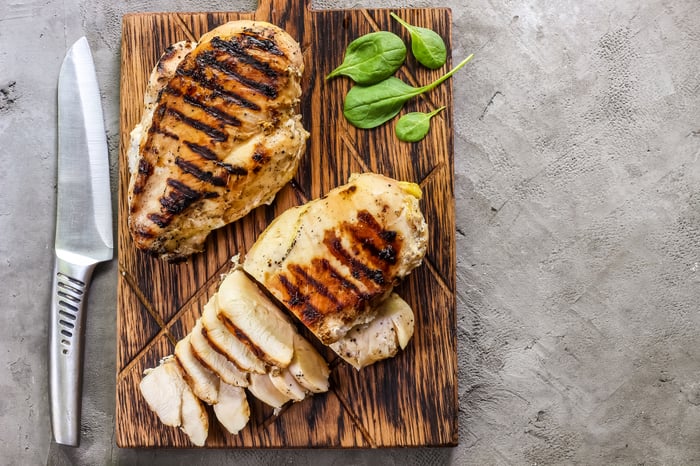 The chicken chain announced this morning it is rolling out new Chickenless Pollo Taco and Burrito products, claiming to be the first national chicken brand to deliver plant-based chicken system-wide. The self-described "nation's leading fire-grilled chicken restaurant chain" further says that this is only a first step in a plan to "evolve and diversify its menu with purpose to make healthier living more accessible and convenient -- with additional Chickenless Pollo™ innovations in the pipeline.

Surprisingly, El Pollo Loco isn't using one of the several meat-alternative protein providers that have sprung up in the last few years. As the company explained, it has instead elected to invent its own plant-based protein in a recipe that "uniquely blends authentic Mexican flavors in an adobo sauce with a non-GMO 100% soy protein base that mirrors shredded chicken."

El Pollo Loco's explanation highlights a particular problem for Beyond Meat, whose first meat-alternative product was in fact plant-based chicken strips in 2012. But in mid-2019, Beyond Meat pulled them from the market confiding that "our Chicken Strips weren't delivering the same plant-based meat experience as some of our more popular products, like the Beyond Burger and Beyond Sausage."

Beyond Meat says it is "working on getting an even better, tastier version of Beyond Chicken Strips back on retail shelves and restaurant menus as soon as possible," and has even partnered with KFC to test a new formulation.

They'd better hope KFC likes it -- because El Pollo Loco is going in a different direction.

Here's Why El Pollo Loco Stock Was Up 13% on Friday