The meat substitute maker's breakfast sausage patties will be taken off the coffee shop's menu everywhere but in Ontario and British Columbia.

It didn't take Tim Hortons very long to decide that plant-based meat alternatives were not the kind of food most of its customers wanted for breakfast. Just months after introducing Beyond Meat (BYND -3.85%) breakfast sausages to its morning menu, the Restaurant Brands International (QSR -0.44%) chain said it was removing them, saying they were only a limited-time offer anyway.

Although that's not how the Canadian coffee shop framed it when it introduced the items in May, Tim Hortons did say they will remain on the menu in restaurants in Ontario and British Columbia, where they received a positive response. But elsewhere throughout Canada, they will be sold only until current supply runs out. 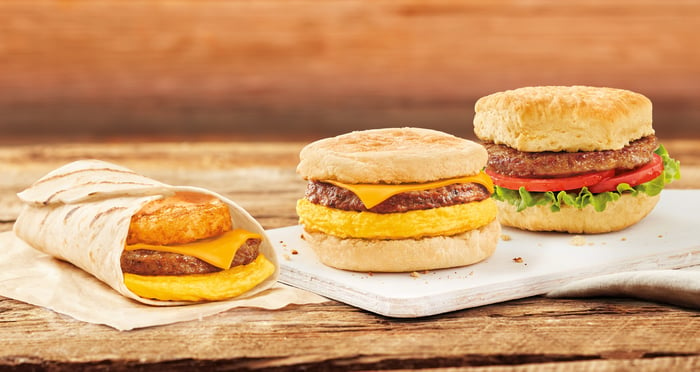 Flipping over burgers, but not much else

Beyond Meat has enjoyed a tremendous response to its meatless burgers, seeing sales to restaurants and food-service companies surge almost 500% in the first quarter of 2019 followed by a near-300% increase in the second quarter.

But burgers have been the crux of the rise, with attempts to move beyond the category proving not as successful. Chicken strips were actually Beyond Meat's first product: Launched back in 2012, they made their way to Whole Foods grocery stores nationwide. But they ultimately failed to catch on, and Beyond Meat pulled them from the market earlier this year.

While Yum! Brands' KFC chain said last month it was testing out a new Beyond Meat chicken nugget in Atlanta, it remains to be seen whether the new formulation is any better. And now it seems like its meatless sausage patties haven't received a ringing endorsement from Tim Hortons, either.

When Tim Horton's first introduced the breakfast sausages, it tested them in a few select restaurants to see what the customer response would be.

"With roughly 4,000 locations in Canada, we're looking forward to being able to offer Canadians from coast-to-coast a truly accessible meat alternative that they can feel good about," the coffee house chain's president, Alex Macedo, said at the time.

That doesn't sound like Tim Horton's was making the patties a limited-time offer, and it indicates Beyond Meat may have trouble branching out into other proteins. Certainly its burgers have been well received, but that may mean it has only one lane to drive in, though it's a broad lane.

While some restaurants such as Arby's, Chipotle Mexican Grill, and Red Lobster have remained decidedly anti-fake meat with their menus, McDonald's just signed on to test Beyond Burgers in Canada, an experiment that could very well see the product spread to the 14,000 restaurants in the U.S.

Tim Hortons is certainly willing to push the envelope when it comes to meat and dairy substitutes. Having added the sausage patties, it followed up by adding Beyond Meat's burgers (a curious choice since parent Restaurant Brands' Burger King chain serves rival Impossible Burgers), and then added Just Brands' mung bean egg substitute, saying, "As we continue to test and get feedback, we will consider expanding plant-based options into other menu items."

While the plant-based sausage patties aren't completely disappearing from Tim Hortons' menu, they'll be harder to find for most Canadians, suggesting it may be more difficult for Beyond Meat to grow much beyond burgers.