Offering Impossible Foods' plant-based meat as alternative version of its signature sandwich is far from a sure win.

Burger King is testing a new Whopper made with fake meat at 59 St. Louis-area restaurants. The so-called Impossible Whopper will be the same as the chain's classic burger, only it will be made with the plant-based meat substitute from the vegetarian-favorite startup supplier Impossible Foods. 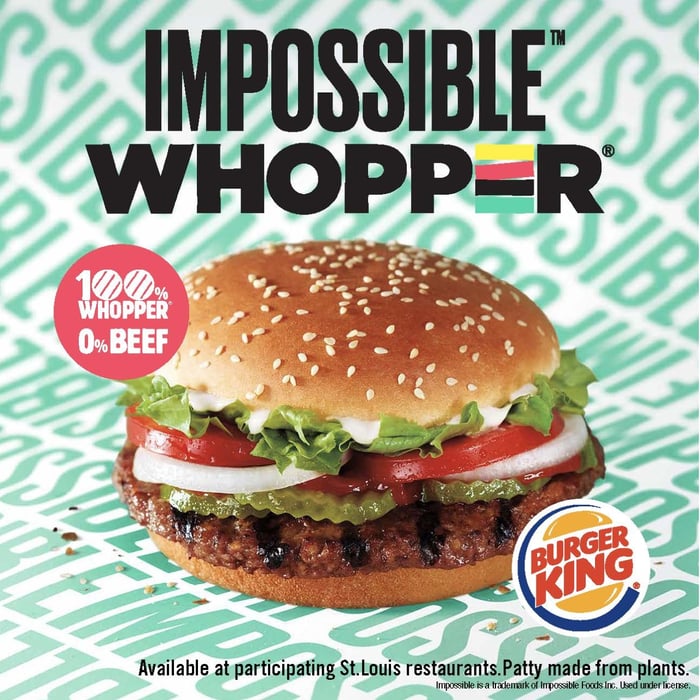 Burger King is hardly the first burger joint to introduce faux meat to its menu -- both White Castle and Red Robin Gourmet Burgers (RRGB -5.10%) also offer Impossible Burgers. However, the Restaurant Brands International (QSR -0.91%) chain says it is the first "coast to coast" national chain to test one out. Carl Jr's also offers a vegetarian burger from Impossible rival Beyond Meat.

Depending upon how the Impossible Whopper is received during the trial phase, it could eventually get rolled out nationwide. And if the marketing is to be believed, its taste is indistinguishable from the all-beef version.

The opportunity here is significant: The market for plant-based foods -- those that directly replace animal products -- hit $3.3 billion in 2018, up 20% in sales year over year, and the meat substitute industry grew at an even faster 24% to more than $670 million. (Sales of substitutes for dairy products like creamers, yogurt, and cheese are growing faster still, however, with some subcategories achieving triple-digit percentage growth rates.) The change in taste, in other words, is becoming mainstream.

While the introduction of the plant-based burger does open up the restaurant to potential new customers -- presumably vegans and vegetarians who would likely have avoided burger joints regardless of how many salads they had on the menu -- it may be a hard sell.

For example, when Beyond Meat accepted investments from protein processor Tyson Foods (TSN 1.61%), which now owns 5% of the plant-based food producer, both companies were excoriated for their partnership.

It's worth noting that those who adhere to a plant based diet make up a relatively small subset of the U.S. population. Only about 5% of Americans are vegetarian -- and 3% are vegan.

A vegan burger will help Burger King stand out from the competition, and the Impossible Whopper has the potential to generate new interest in the restaurant's menu, particularly since the taste is reportedly indistinguishable from real meat.

Sometimes, though, just because you can do something doesn't mean you should. It's certainly not going to do away with all-beef burgers, so its target demo will be very small, its higher price may ward off others, and even if rolled out to all 17,000 restaurants, the Impossible Whopper may not generate meaningful revenue.

It remains to be seen whether Burger King's latest experiment will pay off, however this pivot toward a niche market may offer necessary alternatives to vegans who still want to dine out, cheaply, with their omnivorous friends.