The market seems to be turning against Beyond Meat (NASDAQ:BYND), which until recently was everyone's market darling. Now, sentiment may be going against the faux-meat maker, and as of this writing, the stock has tumbled 37% since it almost hit $235 per share at the end of July.

In less than three months, investors enjoyed an incredible 840% gain from Beyond Meat's initial public offering price of $25 per share, making it one of the most successful offerings of the year. So while Beyond Meat's fall from grace may not have been inevitable, it was certainly likely, and investors may find the decline is not yet over. 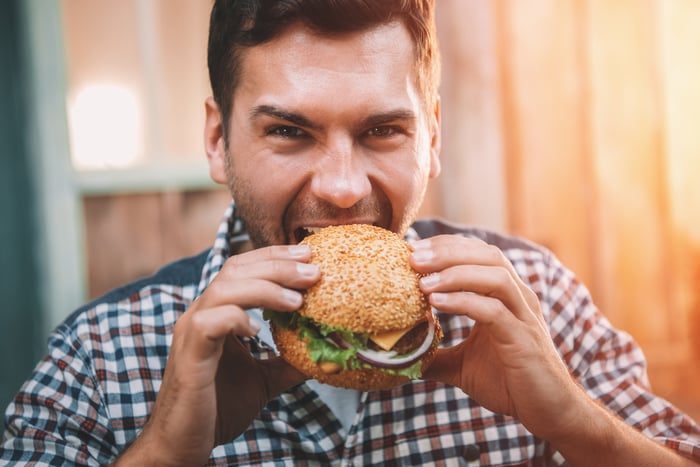 "Plant-based meat" is hot in 2019, and both Beyond Meat and privately-held rival Impossible Burger have ridden the wave for all it's worth.

Although meat alternatives began showing up in greater amounts in supermarkets, whether in meat cases alongside real beef or in specialty food departments next to other vegetarian fare, it was the partnerships with fast-food and casual-dining restaurants that really allowed Beyond Meat and Impossible Burger to grow rapidly.

Beyond Meat's first quarter earnings report, its first as a publicly-traded company, showed revenue soaring 215% year over year on a near-500% increase in sales to restaurants and food service companies.

While many analysts see the potential for the faux-meat market to expand exponentially -- growing to as much as $85 billion over the next 10 years or so, significantly more than the $165 million in sales Beyond Meat generated over the past year -- there are a number of reasons why investors should be cautious about the leading purveyor's position in that market.

The market may not be so big

An analyst at D.A. Davidson recently downgraded Beyond Meat with a price target of $130, because he says the fake-meat market's potential is overhyped. Where people with medical conditions like lactose intolerance might have to drink plant-based milk alternatives -- a market that's often used to size up plant-based meat's possibilities -- very few people can't eat meat. Rather, they choose not to.

As a result, the analyst says this market is about half that of plant-based "milk," and he sees fewer people regularly buying meat alternatives than milk alternatives. Its higher price also makes frequent repeat purchases less likely.

There's also the problem of competition. Initially, it was just niche specialty producers like Impossible Burger that it was competing against, but because they have shown the potential of this market, it's now attracting large, well-financed rivals with the resources to blunt Beyond Meat's growth trajectory.

Beyond a number of start-ups looking to break out, Nestle launched a meatless burger in Europe this past April under its Garden Gourmet brand with plans to bring it to the U.S.; Tyson Foods is developing its own fake meat option; ConAgra owns the meatless food company Gardein; Kellogg will be introducing a plant-based patty under the Incogmeato brand; protein processor Hormel will launch a new brand called Happy Little Plants; and supermarket giant Kroger just said it will have its own offering under the Simple Truth brand.

All of these food companies have substantially deeper pockets than Beyond Meat, and they should be able to develop and bring to market quickly new meat alternative products -- and very likely at a lower cost. That makes it very hard for Beyond Meat to justify the lofty valuations the market is assigning it, even after the big drop in its stock price.

Valuation will be the key

Trading at 57 times sales, Beyond Meat will have to grow enough to sell approximately $3.7 billion worth of plant-based burgers (or more than 22 times the revenue it has generated in the past 12 months) to fit in with the average price-to-sales ratio of its peers. While the company is enjoying triple-digit growth at the moment, Beyond Meat's top line would have to expand at a compound annual rate of almost 40% every year for the next decade to approach that level of sales.

In contrast, Hormel trades at 2.4 times sales, both ConAgra and Kellogg go for about 1.5 times sales, and Tyson Foods just 0.8 times its sales. As these companies fill the market with competing products, it will only become more difficult for Beyond Meat to charge a premium for its offerings.

There's little to support the current leader of plant-based meat alternatives at current trading levels, or where even bearish Wall Street analysts say the stock might go. Beyond Meat has an important niche to serve but not at any price, and investors are only looking at the start of its decline.