The coffee chain says it may add more plant-based alternatives in the future too.

And it might not stop there. According to CNBC, the chain said, "As we continue to test and get feedback, we will consider expanding plant-based options into other menu items." 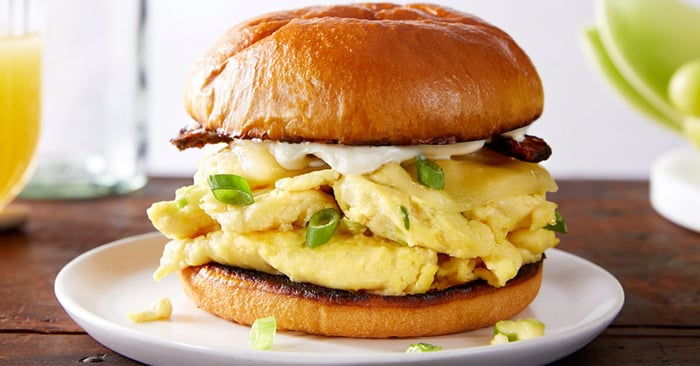 A sandwich made with plant-based egg substitutes from Just. Image source: Just.

Plant-based alternatives to meat and dairy seem to have gained a solid foothold in the restaurant industry, with chains across North America testing faux beef burgers and other such dishes.

Alternatives to dairy were the first to really get the ball rolling with almond, cashew, and other nut-based milks becoming commonplace -- along with nondairy cheeses, such as Field Roast's Chao, made from fermented tofu.

The Plant Based Foods Association (PBFA) says the total U.S. market value of plant-based food alternatives is $4.5 billion, and some analysts think meat alternatives alone can grow into a $140 billion industry over the next 10 years, for a 25% compound annual growth rate.

Sales at leading beef-alternative manufacturer Beyond Meat soared 287% in the latest quarter, allowing it to raise its full-year sales guidance to indicate a 170% jump from last year.

Egg (substitutes) on its face

Tim Horton's partner Just was an early entrant in the plant-based space with its flagship Just Mayo, an egg-free mayonnaise. It got off to an inauspicious start: After its mayo started flying off store shelves, suggesting huge demand, Bloomberg found that the company -- then known as Hampton Creek -- reportedly hired contractors to go to stores to buy out the product ahead of a round of financing.

The company denied that, saying they were quality-control purchases, and a subsequent Securities and Exchange Commission inquiry resulted in the regulatory agency taking no action. But there were also questions about the lower environmental impact its products claimed to have, leading the company to adjust how it referenced them.

Those days seem to be behind Just now, and Tim Horton's is the first major fast-food chain to partner with it.

A beefy opportunity in plant alternatives

There are plenty of categories for Tim Horton's to choose from if it really wants to stuff its menu with alternative foods. While fake eggs are one of the fastest growing categories, with the PBFA reporting annual sales currently at $6 million and leaping at a rate of 38% per year, plant-based creamers are growing 40% annually, and spreads, dips, and sauces are up 52%.

Meat alternatives remain the biggest category, but are growing at just 10%, though with the number of chains adding Beyond Meat's and rival Impossible Foods' plant-based burgers to their menus this year, that growth may accelerate with the next report.

Beef substitutes are the main dish, and while Beyond Meat had a chicken alternative, it wasn't well received and was eliminated. Other companies produce chicken-less chicken, and of course, there's still the old vegetarian Thanksgiving standby, tofurkey. Field Roast makes a complete line of plant-based sausages, franks, roasts, and more, and the key to making these substitutes commercially successful is having them taste like the real thing. That's why tofurkey has never caught on, but why Beyond Meat is seeing sales soar.

It still remains to be seen whether center-plate items like beef, pork, chicken, or eggs can be meaningfully replaced for a larger audience, despite analysts' ability to draw straight lines higher well out into the future.

While there is certainly a niche market for these foods, one that appears to be growing beyond the confines of just vegans and vegetarians, restaurant chains need to be careful they don't clutter their menus with too many options or risk customer confusion and fatigue.

Tim Horton's seems willing to assume the risk, and with its plans to seek more plant-based alternatives, the coffeehouse might just end up with more faux substitutes on its menu than it has real ones.