Shares of Beyond Meat (NASDAQ:BYND) gained over 22% last month, according to data provided by S&P Global Market Intelligence. The stock claimed an all-time high of $239 per share in anticipation of second-quarter 2019 operating results -- and they didn't disappoint. Shares have dropped to around $180 per share in the first few days of August following a stock offering at $160 per share.

The animal-free protein developer continued its impressive growth in Q2 2019, delivered its first-ever quarter of profitable operations, and raised its full-year 2019 revenue outlook. Beyond Meat exited June with $277 million in cash, which gives it plenty of financial power to invest in new product launches, expanded manufacturing capacity, and scaled-up supply chains. 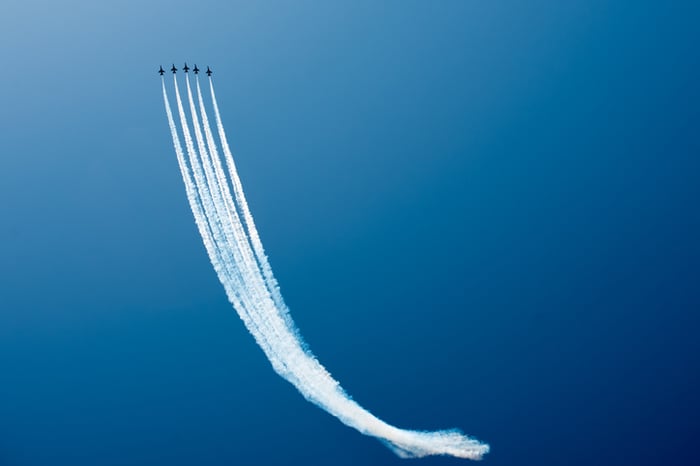 Beyond Meat has been around for years, but it's only just beginning to hit its stride. The business has ditched failed products (looking at you, chicken) and expanded its product lineup with reformulated burger patties, sausage products, and a substitute for ground meat. It learned the tremendous value of leaning on restaurant sales channels in addition to its long-held focus on retail sales.

In fact, restaurant and foodservice revenue grew 483% in the second quarter of 2019 compared to the prior-year period and now comprises half of total revenue. It's on pace to soar well past the 50% mark soon on the way to driving overall growth.

The stock price did take a hit on the day Q2 2019 operating results were announced, however, as Beyond Meat also revealed a stock offering. A total of 3.25 million shares of common stock were offered at $160 apiece, although the company is only selling and earning proceeds from 250,000 shares. The remainder were sold by existing shareholders looking to cash out.

As impressive as the company's growth has been, Beyond Meat is now valued at $10.6 billion. That puts the stock at over 42 times expected full-year 2019 sales and prices in years of future growth. Then again, the business delivered operating income in Q2 2019 for the first time ever and exited June with $277 million in cash (before factoring in the $40 million in gross proceeds raised through the stock offering days ago), so perhaps investors with a long-term mind-set are just demonstrating extraordinary patience.