Please ensure Javascript is enabled for purposes of website accessibility
Log In Help Join The Motley Fool
Free Article Join Over 1 Million Premium Members And Get More In-Depth Stock Guidance and Research
By Matthew DiLallo - Jan 27, 2016 at 10:36AM

A case could be made either way.

Over the past few years Halliburton's (HAL 0.35%) dividend has enjoyed a dramatic jump with the payout doubling since 2012. That said, the company hasn't always been so generous with its dividend increases, and it has a penchant for pausing when times are tough: 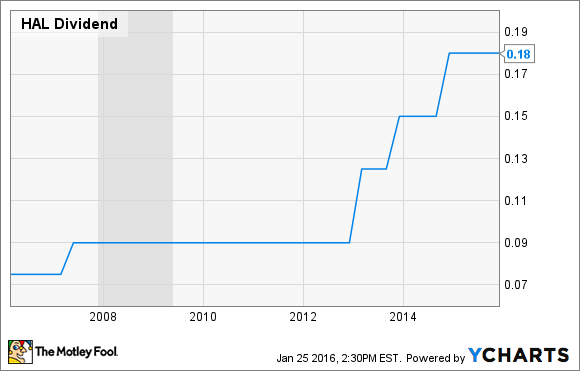 Given how tough times are right now, it's easy to make the case that Halliburton won't raise its dividend in 2016. That said, there's an equally compelling case that the company could indeed raise its payout. Here's a closer look at the bull and bear case for a dividend increase in 2016.

The bear case
There are a lot of reasons why Halliburton might not increase its dividend in 2016. Topping that list, is the current downturn in the oil market, which continues to impact the company's results. While its results have proven to be surprisingly resilient, the fact of the matter is that its earnings are trending lower, which makes it really hard to justify a dividend increase until earnings have vastly improved.

In addition to that, the company is in the midst of acquiring rival Baker Hughes (BHI), which is forcing it to carry higher costs. That deal is no sure thing, with it remaining a very real possibility that regulators will block the deal. If that happened, it would trigger a $3.5 billion break-up fee, which would really hamstring Halliburton's ability to grow its dividend.

Finally, the company didn't raise its dividend in 2015, giving it less incentive to raise the payout in 2016 unless conditions improve. Further, when those conditions do improve, the case could be made that the optimal way to return cash to shareholders is through a stock buyback instead of a dividend increase, given how steeply its stock has sold off since the downturn started.

The bull case
While the current downturn in the oil market is putting a lot of pressure on Halliburton's earnings, the company believes that the rebound is on the horizon, with the potential for conditions to begin improving in the second half of 2016. Further, Halliburton believes that it has very strong upside when conditions do improve. That was a point that CEO Dave Lesar made clear in the company's latest earnings release when he said that, "Ultimately, when this market recovers we believe North America will respond the quickest and offer the greatest upside, and that Halliburton will be positioned to outperform." If the company begins to see this upside materialize in the second half of the year, that could be all the fuel needed to boost the dividend.

In addition to that, if Halliburton does indeed close its deal with Baker Hughes it will significantly bolster the company's size and scale enabling it to deliver significant cost synergies. That improvement in profitability could put the combined company in the position to boost the dividend even if industry conditions have yet to rebound.

Investor takeaway
While there is a case to be made that Halliburton will increase its dividend, given where things stand right now it's not something I would bank on. It's highly unlikely the company would increase its payout until it knows the outcome of the Baker Hughes acquisition, which might not be settled for a while. In addition to that, the oil market has taken a step backward in recent weeks, suggesting that it could be quite a while before it begins to rebound. Further, even if the deal closes and the oil market starts to improve, Halliburton will probably focus its attention on buying back stock instead of boosting its dividend, especially given how much stock it will need to issue to acquire Baker Hughes.

Matt DiLallo has no position in any stocks mentioned. The Motley Fool owns shares of and recommends Halliburton. Try any of our Foolish newsletter services free for 30 days. We Fools may not all hold the same opinions, but we all believe that considering a diverse range of insights makes us better investors. The Motley Fool has a disclosure policy.