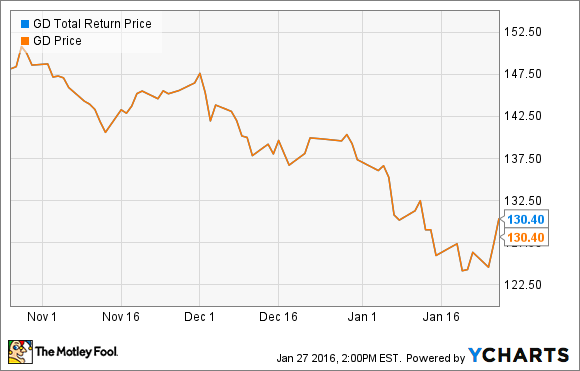 General Dynamics stock has been a poor performer lately. Can a boffo earnings report buck up the stock? GD Total Return Price data by YCharts.

Revenue or earnings? Which is more important?

Go-go growth stock investors almost always focus on whether a company is growing its revenue -- often to the extent of forgetting to ask whether that growth is profitable. But value investors? We know the value of a dollar, and we know that a dollar of profit is worth a whole lot more than a dollar of revenue -- which brings us to General Dynamics (NYSE:GD).

General Dynamics, the nation's largest builder of armored ground vehicles for the U.S. military, reported fiscal Q4 and full-year earnings on Wednesday. From a quarterly perspective, the news wasn't great. Expected to book more than $8.2 billion in sales for Q4, GD actually only got $7.8 billion in work done -- but that's OK. When it came to earning profit on its sales, General Dynamics got the job done in spades.

And voila! In spite of a revenue decline and a revenue miss, General Dynamics both grew earnings strongly and exceeded analysts' expectations for the quarter.

The news was similar for the year, by the way. For all of 2015, General Dynamics posted 2% revenue growth to $31.5 billion. Profit margin for the year matched margin for the quarter -- 13.3% -- thus rising 70 basis points in comparison to 2014 profitability. That improved profitability (and smaller share count) magnified the impact of minimal revenue growth, helping to boost General Dynamics' earnings, and enabling the company to report 22% growth in profits for the year -- $9.08 per diluted share.

And that, dear reader, is how a defense contractor manages to make money even in a down market for defense.

The valuation
And yet, the question remains: While General Dynamics turned in some undeniably fabulous results in 2015, were these numbers good enough to make the stock a buy? I'd argue not. Here's why:

Despite reporting GAAP earnings of $3 billion last year, General Dynamics generated only $1.9 billion in free cash flow. So while the stock may look cheap at a P/E ratio of just 13.7 today, if you value GD on its cash profits, the stock's actually not inexpensive at a price-to-free-cash-flow ratio of 21.6.

Furthermore, before deciding whether to invest in General Dynamics stock, you need to weigh that valuation against the company's growth prospects and dividend yield to establish total return on your investment. 2015's fabulous performance notwithstanding, most analysts who follow this company think General Dynamics will struggle to produce much more than 10% annualized earnings growth over the next five years. Even with a 2.2% dividend yield, that adds up to a total return of just 12.2% on an investment in General Dynamics -- which to my mind, is not big enough to justify paying nearly 22 times free cash flow for the stock.

Long story short, while I certainly wouldn't short a stock as successful as General Dynamics, at today's prices, I wouldn't go, well, long, either.